The Oosterschelde (Eastern Scheldt) is an estuary in Zeeland, Netherlands, between Schouwen-Duiveland and Tholen on the north and Noord-Beveland and Zuid-Beveland on the south.

During the Roman Era it was the major mouth of the Scheldt River. Before the St. Felix's Flood of 1530, it flowed north as a river from the east end of the Westerschelde, turned west a little west of Bergen op Zoom, and then west along the north edge of what is now the Verdronken Land van Reimerswaal, and after that widened into an estuary. Later parts of that lost land were reclaimed, restricting part of the connection to the Scheldt River to a narrow channel called the Kreekrak, which silted up and became unnavigable. In 1903 the Kreekak was closed off with a railway embankment, connecting in the process the island of Zuid-Beveland to the mainland of North Brabant. From that moment on, the Oosterschelde lost its connection with the Scheldt, and is no longer functioning as an estuary.

Between Schouwen-Duiveland and Noord-Beveland there are two road connections, the Oosterscheldedam on the west and the Zeeland Bridge on the east.

After the North Sea flood of 1953, it was decided to close off the Oosterschelde by means of a dam and barrier. The Oosterscheldekering (Eastern Scheldt Storm Surge Barrier), between Schouwen-Duiveland and Noord-Beveland, is the largest of 13 ambitious Delta Works, designed to protect a large part of the Netherlands from flooding. A four kilometre long section has huge sluice-gate-type doors that are normally open, but can be closed under adverse weather conditions.

Upon completion of this barrier in 1986, the flow of water has decreased and the tidal height differential reduced from 3.40 metres (11.2 ft) to 3.25 metres (10.7 ft). As a result, no new sand is deposited on the sand bars which slowly erode, changing the coastal characteristics. 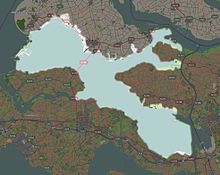 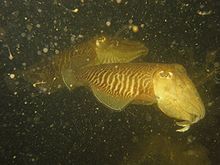 Since May 8, 2002, the entire Oosterschelde was designated a national park. Its boundaries are the dikes of Schouwen-Duiveland, Tholen and Sint-Philipsland, Noord-Beveland and Zuid-Beveland, and the dams of the Delta Works. Having an area of 370 square kilometres (140 sq mi), it is the largest national park in the Netherlands. Total shore length is 125 kilometres (78 mi).

The park consist primarily of the salt waters of the Oosterschelde, but also includes some mud flats, meadows, and shoals. Because of the large variety of sea life, including unique regional species, the park is popular with Scuba divers. Other activities include sailing, fishing, cycling, and bird watching.