A market area of South Mumbai

South Mumbai (Marathi: दक्षिण मुंबई), sometimes incorrectly referred to by English Media (for last 2/3 years only) as "SoBo" (South Bombay), the southern-most precinct of the city of Mumbai, India, comprises the city's main business localities and its adjoining areas. It is the richest urban precinct in India, and houses most of the city's elite.

South Mumbai is home to the Reserve Bank of India and the Bombay Stock Exchange. Its primary business districts are the Fort, Nariman Point, Ballard Estate and more recently Lower Parel. Probably all the consulates, museums and old theatres are located in South Mumbai. Many leading Indian and multi-national companies are headquartered here. A few of the city's prestigious schools and colleges are also located here. Chhatrapati Shivaji Terminus (CST) and Churchgate serve as headquarters and starting point for country's Central and Western Railway lines respectively.

In South Mumbai, all utility services and civic amenities necessary for smooth commercial trade - such as an uninterrupted supply of power - are available around the clock. A particular feature that distinguishes South Mumbai (or Island City) from the rest of Mumbai is the absence of autorickshaws. Only Yellow-top taxis are permitted to ply in South Mumbai. It houses a significant proportion of prime upmarket residential neighbourhoods of Mumbai including: Peddar Road, Nepean Sea Road, Breach Candy and Walkeshwar Road forming a sort of golden quadrilateral and also includes some of the richest boulevards in the world, more prominently the Hanging Gardens, the Altamont Road, Cuffe Parade and the Carmichael Road.

Many distinctive sporting clubs have been an integral part of South Mumbai landscape like the Willingdon Sports Club, the Turf Club at Mahalaxmi Racecourse, the Bombay Gymkhana, the N.S.C.I, and the Malabar Hill Club (Formerly W.I.A.A Club). The CCI and MCA are located at Mumbai's two cricket stadiums, Brabourne and Wankhede respectively.

Although land reclamation has allowed the southern-most tip of the district to double in size since the 1970s, the business districts face an acute shortfall of real estate. As a result, the real estate prices are among the top ten world-wide. In 1995 for instance, short-lease rates in Nariman Point were pegged at 22,608/m² (US$2,100/sq ft) per year. In 2006, the rates stood at approximately US$4,300/sq ft. In 2008, a legendary Bollywood actor-cum-MP paid a record US$3,000/sq ft for a condominium at Hanging Gardens. As a ratio to average per capita income, real estate prices in the business districts remain the most expensive in the world. 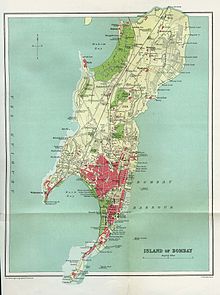 Old Bombay was used to refer to the area which was formed by the merging of the seven original islands of Mumbai, India. The term is now archaic and was used from the 19th century until the 1980s. The more widely used term today is just the word 'town'.

When the islands were merged, the area became Old Bombay. The region north of this became Greater Bombay; now known as the 'Suburbs'. Greater Bombay encompasses an area 5 times the size of Old Bombay.

The region of Old Bombay consists of downtown South Mumbai which is the richest area in India and the nerve centre of Indian commerce.

Acronym: Though the name of the city was changed from Bombay to Mumbai way back in 1995, the English Media is willfully using incorrect acronym “SoBo” (South Bombay) for South Mumbai, since last 2/3 years. .This incorrect and objectionable acronym was possibly coined in 2009. The meaning of this acronym is available in only one dictionary i.e. http://www.urbandictionary.com and is given by BombayHustle on Oct 15, 2009. BombayHustle is so far untraceable, so who coined this acronym and when is quite intriguing.A correct acronym would be “SoMu”