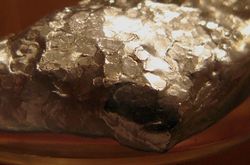 Wood's metal is useful as a low-melting solder, low-temperature casting metal, high temperature coupling fluid in heat baths, and as a fire-melted valve element in fire sprinkler systems in buildings. Medical gas cylinders in the United Kingdom have a Wood's metal seal which melts in fire, allowing the gas to escape and reducing the risk of gas explosion.

A common use is as a filler when bending thin-walled metal tubes. For this use the tubing is filled with molten Wood's metal. After the filler solidifies the tubing is bent, and the filler prevents collapse of the tubing. The Wood's metal is then removed by heating, often by boiling in water.

Other uses include making custom-shaped apertures and blocks (for example, electron-beam cutouts and lung blocks) for medical radiation treatment, and making metal inlays in wood.

Wood's metal is also useful for repairing antiques. For example, a bent piece of sheet metal may be repaired by casting a Wood's metal die from a good example. The low melting temperature of Wood's metal makes it unlikely this will harm the original. The damaged piece can then be clamped in the die and slowly tightened to form it back into shape.

Wood's metal has long been used by model railroad enthusiasts to add weight to locomotives, increasing traction, and the number of cars that can be pulled.

Wood's metal is also used in the making of extracellular electrode for the electro-physiological recording of neural activity.[2]

Like other fusible alloys, e.g. Rose's metal, Wood's metal can be used as a heat transfer medium in hot baths. Hot baths with Rose's and Wood's metals are not in routine use but are employed for temperatures above 220 °C.[3]

Wood's metal is toxic because it contains lead and cadmium, and therefore contact with the bare skin is thought to be harmful, especially in the molten state. Vapour from cadmium-containing alloys is also known to pose a danger to humans. Cadmium poisoning carries the risk of cancer, anosmia (loss of sense of smell), and damage to the liver, kidneys, nerves, bones, and respiratory system. Field's metal is a non-toxic alternative.

The dust may form flammable mixtures with air.

A similar alloy is called cerrosafe. This non-eutectic alloy melts at 165 °F (74 °C). It is mainly used by gunsmiths for making a reference casting of the chamber of a firearm. When it solidifies it first shrinks, allowing easy removal from the chamber. When it cools it expands back to the exact size of the chamber. The casting can then be directly measured with calipers or a micrometer to determine the dimension of the weapon's chamber, which is important for safety.

Their compositions are as follows: