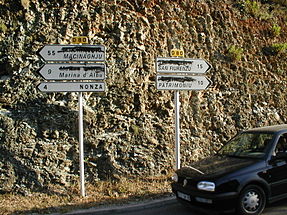 Corsican (Corsican: corsu or lingua corsa) is a Italo-Dalmatian Romance language spoken and written on the islands of Corsica (France) and northern Sardinia (Italy). Corsican is the traditional native language of the Corsican people, and was long the vernacular language alongside the Italian, official language in Corsica until 1859, which was replaced by French due to the acquisition of the Island by France in 1768. Over the next two centuries, the forced use of French grew to the extent that, by the Liberation in 1945, all islanders had a working knowledge of French. The twentieth century saw a wholesale language shift, with islanders changing their language practices to the extent that there were no monolingual Corsican speakers left by the 1960s. By 1990, an estimated 50% of islanders had some degree of proficiency in Corsican, and a small minority, perhaps 10%, used Corsu as a first language.[2]

The January 2007 estimated population of the island was 281,000, while the figure for the March 1999 census, when most of the studies – though not the linguistic survey work referenced in this article – were performed, was about 261,000 (see under Corsica). Only a fraction of the population at either time spoke Corsican with any fluency. The 2001 population of 341,000 speakers on the island given by Ethnologue[3] exceeds either census and thus may be considered questionable[original research?], like its estimate of 402,000 speakers worldwide.

The use of Corsican over French has been declining. In 1980 about 70% of the population "had some command of the Corsican language."[4] In 1990 out of a total population of about 254,000 the percentage had declined to 50%, with only 10% using it as a first language.[2] The language appeared to be in serious decline when the French government reversed its non-supportive stand and began some strong measures to save it. Whether these measures will succeed remains to be seen. No recent statistics on Corsu are available.

UNESCO classifies the Corsican language as a potentially endangered language, as it has "a large number of children speakers" but is "without an official or prestigious status."[5] The classification does not state that the language is currently endangered, only that it is potentially so. In fact it is being vigorously affirmed. Often acting according to the current long-standing sentiment unknown Corsicans cross out French roadway signs and paint in the Corsu names. The Corsican language is a key vehicle for Corsican culture, which is notably rich in proverbs and in polyphonic song.

The 1991 "Joxe Statute", in setting up the Collectivité Territoriale de Corse, also provided for the Corsican Assembly, and charged it with developing a plan for the optional teaching of Corsu. The University of Corsica Pascal Paoli at Corte took a central role in the planning.[6]

At the primary school level Corsu is taught up to a fixed number of hours per week (three in the year 2000) and is a voluntary subject at the secondary school level,[7] but is required at the University of Corsica. It is available through adult education. It can be spoken in court or in the conduct of other government business if the officials concerned speak it. The Cultural Council of the Corsican Assembly advocates for its use; for example, on public signs.

According to the anthropologist Dumenica Verdoni, writing new literature in modern Corsican, known as the Riacquistu, is an integral part of affirming Corsican identity.[8] Persons who had a notable career in France returned to Corsica to write in Corsican, such as the musical producers, Dumenicu Togniotti, director of the Teatru Paisanu, which produced polyphonic musicals, 1973–1982, followed in 1980 by Michel Raffaelli's Teatru di a Testa Mora, and Saveriu Valentini's Teatru Cupabbia in 1984.[9] The list of prose writers includes Alanu di Meglio, Ghjacumu Fusina, Lucia Santucci, Marcu Biancarelli,and many others.[10]

A mythology concerning the Corsican language is to some degree current[citation needed] among foreigners, that it was a spoken language only or was only recently written. Omniglot goes so far as to assert "Corsican first appeared in writing towards the end of the 19th century ...."[11] Throughout the 19th and 18th century there was a steady stream of writers in Corsican, many of whom wrote also in other languages.[12]

Ferdinand Gregorovius, 19th century traveller and enthusiast of Corsican culture, reports that the preferred form of the literary tradition of his time was the vocero, a type of polyphonic ballad originating from funeral obsequies. These laments were similar in form to the chorales of Greek drama except that the leader could improvise. Some performers were noted at this, such as the 18th century Mariola della Piazzole and Clorinda Franseschi.[13]

The trail of written popular literature of known date in Corsican currently goes no further back than the 17th century.[14] An undated corpus of proverbs from communes may well precede it (see under External links below). Corsican has also left a trail of legal documents ending in the late 12th century. At that time the monasteries held considerable land on Corsica and many of the churchmen were notaries.

Between 1200 and 1425 the monastery of Gorgona, Benedictine for much of that time and in the territory of Pisa, acquired about 40 legal papers of various sorts written on Corsica. As the church was replacing Pisan prelates with Corsican ones there the legal language shows a transition from entirely Latin through partially Latin, partially Corsican to entirely Corsican. The first known surviving document containing some Corsican is a bill of sale from Patrimonio dated to 1220.[15] These documents were moved to Pisa before the monastery closed its doors and were published there.

Research into earlier evidence of Corsican is ongoing. It is entirely possible that archaeology or research in monastic archives will turn up more.

The Corsican language has been influenced by the languages of the major powers taking an interest in Corsican affairs; earlier by those of the Medieval Italian powers: Tuscany (828-1077), Pisa (1077–1282) and Genoa (1282-1768), more recently by France (1768–present), which, since 1789, has promulgated the official Parisian French. The term gallicised Corsican refers to Corsu up to about the year 1950. The term distanciated Corsican refers to an idealized Corsu from which various agents have succeeded in removing French or other elements.[16]

The general classification of Corsican as a Romance language allows two possibilities as to the identity of the speakers of the first distinct Corsican, or Proto-Corsican. They created the language either from Proto-Romance or from a subsequent Romance language.

In 40 AD neither a Romance nor an Italic language were spoken by the natives of Corsica. The Roman exile, Seneca the younger, reports that both coast and interior were occupied by natives whose language he did not understand (see under Prehistory of Corsica). Latin at that time was generally spoken only in the Roman colonies. There was probably a substratic language that is still visible in the toponymy or in some words, for instance Gallurese zerru 'pig'. The same is valid for Sardinian. The occupation of the island by Vandals about 469 AD marks the end of authoritative influence by Latin-speaking Romans (see under Medieval Corsica). If the natives of that time were speaking Latin they must have acquired it during the late empire. The documents of the early Christian church concerning Corsica are in Latin, but they are only communications between church officials (see under Ajaccio).

The next window of opportunity for the predecessor of a Proto-Corsican was the administration of Corsica by Tuscany, then speaking the Tuscan dialect, an immediate predecessor of Italian. The first Italian documents date from the 10th century but Italian must have developed earlier and Tuscan even earlier. Tuscan would have come from the latest phases of Vulgar Latin; Proto-Corsican from the Tuscan spoken on Corsica.

The last historical possibility is that Proto-Corsican came from the Tuscan dialect of Pisa; its period of Corsican administration, however, was relatively short. Genoese is not a likely possibility as Corsican is attested before the presence of Genoa on Corsica, and the linguistic features of Corsican do not match well with those of Genoese. Historical circumstances alone reduce the window of opportunity only to within several hundred years.

One of the main sources of confusion in popular classifications is the difference between a dialect and a language. Typically it is not possible to ascertain what an author means by these terms. For example, one might read that Corsican is a "central southern Italian dialect" along with Tuscan, Neapolitan, Sicilian and others[17] or that it is "closely related to the Tuscan dialect of Italian,"[18] where it is generally understood that Italian is from Tuscan.

One of the characteristics of Tuscan and Italian is that Latin -u- in -um becomes -o: annum "year" but Italian anno. Corsican has annu, retaining the -u. Or, the -re infinitive ending as in Latin mittere, "send", is retained in Tuscan but lost in Corsican, which has mette/metta, "to put." The Latin relative pronoun, "who," "qui," "quae," and "what," "quod," are inflected in Latin, while relative pronoun in Italian for "who" and "what" is "che" and in Corsican is uninflected chì." 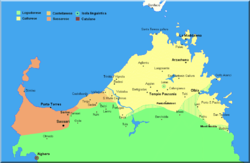 On Maddalena archipelago the local dialect (called Isulanu, Maddaleninu, Maddalenino) was brought by fishermen and shepherds from Bonifacio during immigration in the 17th-18th centuries. Though influenced by Gallurese it has maintained the original characteristics of Corsican. There are also numerous words of Genoese and Ponzese origin.[3]

Languages related to Corsican in Sardinia

Gallurese is spoken in the extreme north of Sardinia, including the region of Gallura and the archipelago of La Maddalena. Sassarese, is spoken in Sassari and in its neighbourhood, in the north-west of Sardinia. Whether these two languages should be included in the Corsican language as dialects, included in Sardinian as dialects, or considered as independent languages, is debatable.

Article 2 Item 4 of Law Number 26, October 15, 1997, of the Autonomous Region of Sardinia grants "al dialetto sassarese e a quello gallurese" equal legal status with the other languages on Sardinia. They are being legally defined as different languages from Sardinian by the Sardinian government.[19]

Corsican uses the Latin script with some changes. Although the words written in it are close enough to Italian and Latin for the non-Corsican speaker with a language background to follow, the pronunciation of those letters in English, French or Italian is not a guide to the pronunciation of Corsican, which follows complex rules.

The grapheme "i" appears in some digraphs and trigraphs in which it does not represent the phonemic vowel. All vowels are pronounced except in a few well-defined instances. "I" is not pronounced before a, o, u after sc, sg, c and g: sciarpa [ˈʃarpa]; or initially in some words: istu [ˈstu].[20]

Vowels may be nasalized before n, which is assimilated to m before p or b, and the liquid consonant, gn. The nasal vowels are represented by the vowel plus n, m or gn. The combination is a digraph or trigraph indicating the nasalized vowel. The consonant is pronounced in weakened form. The same combination of letters might not be the digraph or trigraph but might be just the non-nasal vowel followed by the consonant at full weight. The speaker must know the difference. Example of nasal: pane is pronounced [ˈpãnɛ] and not [ˈpanɛ].

The vowel inventory, or collection of phonemic vowels (and the major allophones), transcribed in IPA symbols, is:[11][21]