Minister of the Interior (France)

Minister of the Interior (France)

The Minister of Interior is also Ministre des cultes and is formally consulted in the process of appointment of Catholic diocesan bishops (Briand-Ceretti Agreement). 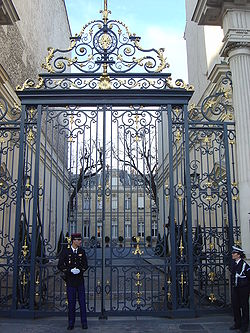 The entrance to the Ministry in Place Beauvau is guarded by one gendarme (to the left) and one policewoman (to the right). Joint gendarmerie/police guard duty was seen as a way to bridge the differences between the services.

The Ministry's headquarters are located on the place Beauvau, facing the Élysée Palace. "Place Beauvau" is often used as a metonym for the ministry.

The current Minister of the Interior is Claude Guéant.