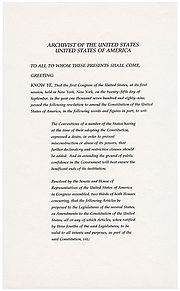 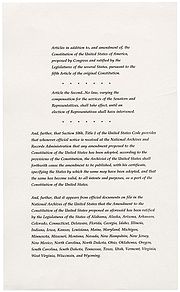 Page 2 of the amendment's certification 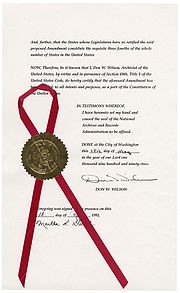 Page 3 of the amendment's certification

The Twenty-seventh Amendment (Amendment XXVII) prohibits any law that increases or decreases the salary of members of the Congress from taking effect until the start of the next set of terms of office for Representatives. It is the most recent amendment to the United States Constitution, having been ratified in 1992, 203 years after its initial submission to the states for ratification.

This amendment was actually suggested by a number of states. During the 1788 North Carolina convention, assembled to consider the original Constitution itself, the following amendment, among others, was requested of Congress:

The laws ascertaining the compensation of senators and representatives, for their services, shall be postponed in their operation until after the election of representatives immediately succeeding the passing thereof; that excepted which shall first be passed on the subject.

In 1816, more than a quarter century after the Congress had officially submitted the amendment (and eleven others) to the state legislatures for consideration, the Massachusetts General Court expressed its desire for an amendment to the Constitution worded almost exactly as it was offered by Congress in 1789. The legislation embodying the recommendation was reportedly approved by the Massachusetts House of Representatives on a vote of 138 to 29. Sometime in December 1816 or early 1817 the Kentucky General Assembly did the same thing; and in 1817 or January 1818 Tennessee's lawmakers followed suit.

Presented in the United States House of Representatives by Representative James Madison of Virginia, this amendment was the second of the twelve Constitutional amendments originally submitted to the state legislatures for ratification by the 1st Congress on September 25, 1789, the last ten of which became the United States Bill of Rights by December 15, 1791.

From 1789 to 1791, the compensation proposal was ratified by the legislatures of only six states—Maryland, North Carolina, South Carolina, Delaware, Vermont and Virginia —out of the ten then required. As more states entered the Union, the ratification threshold increased. In 1873, more than 80 years after Congress offered it to the nation's state lawmakers, the Ohio General Assembly ratified the compensation amendment as a means of protest against the "Salary Grab Act".[1] The Salary Grab Act not only provided for a Congressional pay raise, but made that raise retroactive.

The proposed amendment was ratified by Wyoming in 1978 as a protest to a Congressional pay raise,[2] but the proposed amendment was largely forgotten before University of Texas at Austin undergraduate student Gregory Watson wrote a paper on the subject in 1982.[3] He started a new push for ratification with a letter-writing campaign to state legislatures.[1]

Under the U.S. Supreme Court's landmark decision in Coleman v. Miller, 307 U.S. 433 (1939), any proposed amendment which has been submitted to the states for ratification and does not specify a ratification deadline may be ratified by the states at any time. In Coleman, the Supreme Court further ruled that the ratification of a constitutional amendment is political in nature—and so not a matter properly assigned to the judiciary.

Certification and Congressional acceptance of ratification

On May 18, 1992, the amendment was officially certified by Archivist of the United States Don W. Wilson. On May 19, 1992, it was printed in the Federal Register, together with the certificate of ratification.[4]

Speaker of the House Tom Foley and others called for a legal challenge to the amendment's unusual ratification.

Despite that, Senator Robert Byrd of West Virginia scolded Wilson for having certified the amendment without Congressional approval. Although Byrd supported Congressional acceptance of the amendment, he contended that Wilson had deviated from "historic tradition" by not waiting for Congress to consider the validity of the ratification, given the more than 202-year lapse since the Amendment had been proposed.[4]

On May 20, 1992, under the authority recognized in Coleman, and in keeping with the precedent first established regarding the ratification of the Fourteenth Amendment, each house of the 102nd Congress passed a version of a concurrent resolution agreeing that the amendment was validly ratified, despite the unorthodox period of more than 202 years for the completion of the task. However, neither version was adopted by the entire Congress. 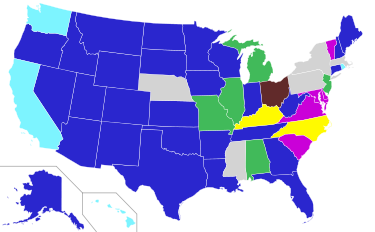 There is some conflict as to the exact ratification dates of the amendment. In some cases, a state's ratification resolution was signed by legislative officers before that state's second house had acted. In other cases, several governors subsequently "approved" the resolutions, even though gubernatorial action is not required by Article V (which requires ratification only by state legislatures or state conventions). Many state legislative journals are unavailable.[5]

The Congress proposed this amendment on September 25, 1789 and the following states ratified the amendment:

States that have not ratified the amendment

Congressional cost of living adjustments (COLAs) have been upheld against legal challenges based on this amendment. In Boehner v. Anderson,[12] the United States Court of Appeals for the District of Columbia Circuit ruled that the Twenty-seventh Amendment does not affect annual COLAs. In Schaffer v. Clinton,[13] the United States Court of Appeals for the Tenth Circuit ruled that receiving such a COLA does not grant members of the Congress standing in federal court to challenge that COLA; the Supreme Court did not hear either case and so has never ruled on this amendment's effect on COLAs.