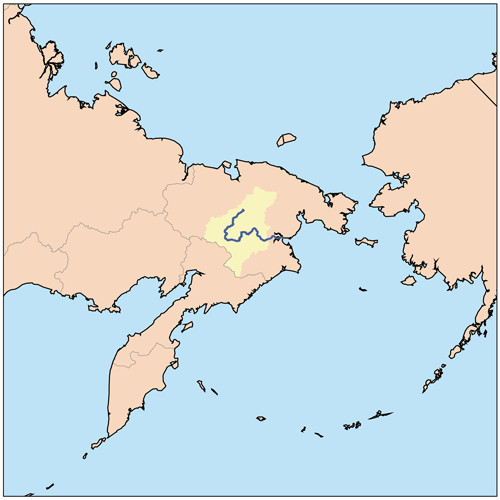 Anadyr ( _ru. Ана́дырь) is a in the extreme northeast of , Russian Federation.

The river rises in the

On a walrus hunting expedition in 1648 Semyon Dezhnev reached the mouth of the Anadyr. From the liman, Dezhnev went up the river and founded Anadyrskiy ostrog (fort). In the 18th century, the Anadyr was described by the polar explorer .

The country through which it passes is thinly populated, and is dominated by , with a rich variety of plant life. [The area, which is still sparsely populated today, was described as "thinly populated" by the in 1911.] Much of the region has beautiful landscapes, dominated by often spectacular, rugged mountains. For nine months of the year the ground is covered with snow, and the frozen rivers become navigable roads.

, upon which the local inhabitants subsisted, were once found in considerable numbers [This point was made in the : "Reindeer, upon which the inhabitants subsist, are found in considerable numbers."] , but the domestic reindeer population has collapsed dramatically since the reorganization and privatization of state-run collective farms beginning in 1992. As herds of domestic reindeer have declined, herds of wild have increased.

There are ten species of inhabiting the Anadyr river basin. Every year, on the last Sunday in April, there is an ice fishing competition in the frozen estuarine waters of the Anadyr River's mouth. This festival is locally known as Korfest.