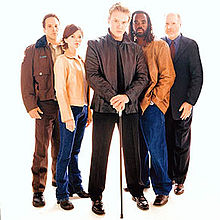 The cast of The Dead Zone.

The Dead Zone, aka Stephen King's Dead Zone (in USA) is an American-Canadian science fiction/suspense series starring Anthony Michael Hall as Johnny Smith, who discovers he has developed psychic abilities after a coma. The show, credited as "based on characters" from Stephen King's 1979 novel of the same name, first aired in 2002, and was produced by Lionsgate Television and CBS Paramount Television (Paramount Television 2002-05) for the USA Network.

The show was originally commissioned for UPN, but the network later dropped the show and it was picked up instead by USA.[2] The series was filmed in Vancouver, British Columbia, Canada for its first five seasons. The sixth and last season was billed as "The season that changes everything" and production was moved to Montreal.[3]

The Dead Zone was expected to be renewed for a seventh season, however due to low ratings and high production cost the series was canceled in December 2007, without a proper series finale.

Some rumors spread that Syfy would pick up the series after it was canceled by USA, but it did not happen. There are still some rumors of a made for TV movie.[4] The Dead Zone is also airing in syndication on Ion as of 2008[5] along with Sleuth and overnight (1-2 am) on Fox as of 2009.

Small-town teacher Johnny Smith is involved in a car accident that leaves him comatose for approximately six years. After regaining consciousness, Johnny begins having visions of the past and future triggered by touching items or people; doctors attribute the visions to activity in a previously unused "dead zone" of his brain that is attempting to compensate for the impaired function of the portions injured in the accident. Johnny also learns that his fiancée, Sarah, gave birth to his son in the interim following the accident, but has since married another man.

With the help of Sarah, her husband Walt, and physical therapist Bruce, Johnny begins using his abilities to help solve crimes. However, his attempts to do good are complicated by intermittent visions of apocalyptic events brought about following the future election of congressional candidate Greg Stillson.

‹ The template below (USANetwork Shows) is being considered for deletion. See templates for discussion to help reach a consensus.›
Categories: