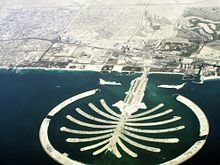 The Palm Islands are an artificial archipelago in Dubai, United Arab Emirates on which major commercial and residential infrastructures will be constructed. They are being constructed by Nakheel Properties, a property developer in the United Arab Emirates, who hired Belgian and Dutch dredging and marine contractor Jan De Nul and Van Oord, some of the world's specialists in land reclamation. The islands are the Palm Jumeirah, the Palm Jebel Ali and the Palm Deira.

Each settlement will be in the shape of a palm tree, topped with a crescent, and will have a large number of residential, leisure and entertainment centers. The Palm Islands are located off the coast of The United Arab Emirates in the Persian Gulf and will add 520 kilometers of beaches to the city of Dubai.

The first two islands will comprise approximately 100 million cubic meters of rock and sand. Palm Deira will be composed of approximately 1 billion cubic meters of rock and sand. All materials will be quarried in the UAE. Among the three islands there will be over 100 luxury hotels, exclusive residential beach side villas and apartments, marinas, water theme parks, restaurants, shopping malls, sports facilities and health spas.

The creation of the Palm Jumeirah began in June 2001. Shortly after, the Palm Jebel Ali was announced and reclamation work began. The Palm Deira, which is planned to have a surface area of 46.35 square kilometres, was announced for development in October 2004. Construction was originally planned to take 10–15 years, but that was before the impact of the global credit crunch hit Dubai.

The Palm Islands are artificial peninsulas constructed of sand dredged from the bottom of the Persian Gulf by the Belgian company Jan De Nul and the Dutch company Van Oord. The sand is sprayed by the dredging ships, which are guided by DGPS, on to the required area in a process known as rainbowing because of the arcs in the air when the sand is sprayed. The outer edge of each Palm's encircling crescent is a large rock breakwater. The breakwater of the Palm Jumeirah has over seven million tons of rock. Each rock was placed individually by a crane, signed off by a diver and given a GPS coordinate.[citation needed] The Jan De Nul Group started working on the Palm Jebel Ali in 2002 and had finished by the end of 2006. The reclamation project for the Palm Jebel Ali includes the creation of a four-kilometre-long peninsula, protected by a 200-metre-wide, seventeen-kilometre long circular breakwater. 210,000,000 m3 of rock, sand and limestone were reclaimed (partly originating from the Jebel Ali Entrance Channel dredging works). There are approximately 10,000,000 cubic metres of rocks in the slope protection works.

The Palm Jumeirah seen from the International Space Station.

Residents began moving into their Palm Jumeirah properties at the end of 2006, five years after land reclamation began, according to project developer Nakheel Properties. This signaled the end of phase one of construction, which includes approximately 1,400 villas on 11 of the fronds of the island and roughly 2,500 shoreline apartments in 20 buildings on the east side of the trunk.

Nakheel Properties will mark the arrival of the first residents by bringing one of the world's largest airships to Dubai. It has agreed to a deal with Airship Management Services Inc. for a 197 feet (60 m) long, 250,000-cubic-foot (7,100 m3) Skyship 600 dirigible.

According to Nakheel Properties officials, the process of adding 78 kilometers of beach is under way, while eight of the 32 hotels on The Palm Jumeirah have begun construction, including the Taj Exotica Resort and Spa, which was planned for completion in late 2008 or early 2009, is delayed and now expected to open in early 2010. The first phase Atlantis, The Palm Resort, is scheduled to be completed by December 2008. Atlantis, The Palm opened on 24 September, 2008.

The "Golden Mile", the strip of land located along the center of the trunk overlooking the canal, is set for completion in the first quarter of 2008. The tenants started moving in 30 April 2009. Construction has also begun on the Palm Jumeirah Monorail, which will take three years to complete and will serve as a transit system between the Gateway Station at the trunk of The Palm Jumeirah and the Atlantis Station on the crescent. (Emirates News Agency, WAM).The Monorail opened May 6 2009 only using Atlantis Hotel and Gateway Towers Stations.

The Palm Jebel Ali Umar began construction in October 2002 and was expected to be completed in mid 2008.[1] [2] Once it has been completed, it will be encircled by Dubai Waterfront. The project, which is 50 percent larger than the Palm Jumeirah, will include six marinas, a water theme park, 'Sea Village', homes built on stilts, and boardwalks that circle the "fronds" of the "palm" and spell out an Arabic poem by Sheikh Mohammed bin Rashid Al Maktoum:[1]

Take wisdom from the wise

One of the first buildings on The Palm Jebel Ali is already known. Nakheel invited several architects to design a building on a 300,000 m2 area. The winning design was a building by Royal Haskoning, who also worked on several other projects in Dubai.[3] The building can be seen here.

In the first signs of a slowing Dubai property market, the prices of properties being sold on the Palm Jebel Ali were reported to have fallen by 40% in the two months to November 2008, with the fall being attributed to the Financial crisis of 2007–2010.[4]

In 2012, the first phase of four theme parks will open on the Crescent. These parks, which together will be called "World of Discovery," will be developed and operated by the Busch Entertainment Corporation. The parks include SeaWorld, Aquatica, Busch Gardens and Discovery Cove. The World of Discovery will be located at the top of the Crescent, which will form into the shape of an orca (reminiscent of Shamu).[5][6]

By early October 2007, 20% of the island's reclamation was complete, with a total of 200 million cubic metres (7 billion cubic feet) of sand already used.[2] Then in early April 2008, Nakheel announced that more than a quarter of the total area of the Palm Deira had been reclaimed.[8] This amounted to 300 million cubic metres (10.6 billion cubic feet) of sand.[8] Since the island is so large, it is being developed in several phases. The first one is the creation of Deira Island.[2] This portion of the Palm will sit alongside the Deira Corniche between the entrance to Dubai Creek and Al Hamriya Port. Promotional materials state that Deira Island will act as "the gateway to The Palm Deira"[9] and help to revitalize the aging area of Deira.[10] By early April 2008, 80% of Deira Island Front's reclamation was complete.[8]

A new redesign was quietly introduced in November 2008, further reducing the size of the project.[11]

Ideally Geo Links should be integrated into the main article.