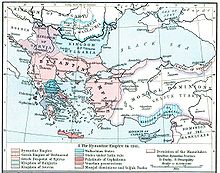 Road to the throne

Michael VIII Palaiologos was the son of the megas domestikos Andronikos Doukas Komnenos Palaiologos by Theodora Angelina Palaiologina, the granddaughter of Emperor Alexios III Angelos and Euphrosyne Doukaina Kamaterina. Even with our imperfect knowledge of Byzantine genealogy, no less than eleven emperors may be traced among his ancestors. He was one of the noblest men among the Byzantine aristocracy, and might have succeeded to the throne in regular fashion if the Fourth Crusade had not been diverted to Constantinople in 1203. At an early age he rose to distinction, and ultimately became commander of the Latin mercenaries in the employment of the emperors of Nicaea. A few days after the death of Emperor Theodore II Doukas Laskaris in 1258, Michael Palaiologos instigated a coup against the influential bureaucrat George Mouzalon, becoming joint guardian for the eight-year old Emperor John IV Doukas Laskaris together with the patriarch Arsenios. Michael was invested with the titles of megas doux and, in November 1258, of despotēs. On 1 January 1259 Michael VIII Palaiologos was proclaimed co-emperor at Nymphaion with the help of the Republic of Genoa.

On 25 July 1261, Michael VIII's general Alexios Strategopoulos captured Constantinople from its last Latin Emperor, Baldwin II. Michael VIII entered the city on 15 August and had himself crowned together with his infant son Andronikos II Palaiologos. When Michael VIII entered the city, its population was 35,000 people, but he succeeded in increasing it to 70,000 people by the end of his reign. In December John IV, who had been left behind at Nicaea, was blinded and relegated to a monastery. Patriarch Arsenios excommunicated Michael VIII, and the ban was not removed until six years later (1268) on the appointment of new patriarch Joseph I. After rendering John IV ineligible for the throne, Michael VIII quickly married off John's sisters to foreigners, so their descendants could not threaten his own children's claim to the imperial succession. On his entrance in Constantinople, Michael VIII Palaiologos abolished all Latin customs and reinstated most Byzantine ceremonies and institutions as they had existed before the Fourth Crusade, repopulating the capital and restoring damaged churches, monasteries, and public buildings. He was acutely aware of the danger posed by the possibility that the Latin West, particularly his neighbors in Italy (Charles I of Sicily, Pope Martin IV, and the Venetians) would unite against him and attempt the restoration of Latin rule in Constantinople. 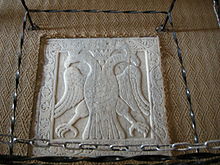 Imperial eagle in Mystras. In 1263 the Latins ceded Mystras as ransom for William II of Villehardouin, and Michael VIII Palaeologus made the city the seat of the new Despotate of Morea, ruled by his relatives, although the Venetians still controlled the coast and the islands.

In 1259 Michael VIII defeated the alliance of William II Villehardouin, Prince of Achaea, and Michael II Komnenos Doukas of Epirus at the Battle of Pelagonia. In 1263, the emperor sent 15,000 men (which included 5,000 Seljuk mercenaries) to conquer the Principality of Achaea, but this expedition failed in the battles of Prinitza and Makryplagi, and a mixed imperial and Genoese fleet of 48 ships was defeated by a smaller Venetian force at the Battle of Settepozzi.

After Settepozzi, Michael VIII dismissed the 60 Genoese galleys that he had hired earlier, and began a rapprochement with Venice. With the help of Pope Urban IV Michael VIII concluded peace with his former enemies. By the terms of the treaties, William II was obliged to cede Mystras, Monemvasia and Maina in the Morea to the Byzantines. He also signed a treaty in 1263 with the Egyptian Mamluk sultan Baibars, and the Mongol Khan of Kipchak.[2] 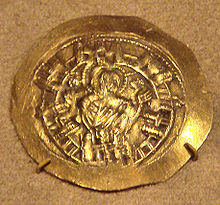 Coin of Michael VIII Paleologus, depicting the Virgin Mary rising over the walls of Constantinople, in commemoration of the capture of the city over the Latins.

To drive a wedge between the pope and supporters of the Latin Empire, Michael VIII decided to unify the Orthodox and Catholic Churches. A tenuous union between the Greek and Latin church was signed at the Second Council of Lyons in 1274. Michael VIII's concession was met with determined opposition at home, and prisons filled with many opponents to the union. At the same time the unionist controversy helped drive Byzantium's Orthodox neighbors Bulgaria and Serbia into the camp of Michael VIII's opponents. This threat did not materialise in a significant way during Michael VIII's reign, and the Emperor tried to take advantage of a civil war in Bulgaria in the late 1270s but the Byzantine armies suffered several major defeats at the hands of the peasant Emperor Ivaylo. He managed to temporarily impose his son-in-law Ivan Asen III on the Bulgarian throne but after the Byzantine defeat at Devina he had to flee. However, later Michael VIII managed to conquer the Bulgarian portion of Thrace while the internal situation of the Bulgarian Empire remained unstable. For a while the diplomatic intent of the union worked out in the West, but in the end Pope Martin IV, an ally of Charles of Anjou, excommunicated Michael VIII. In 1275, Michael VIII sent an army against Thessaly and fleet of 73 ships to harass the Latin states in Greece. The army was crushingly defeated at the Battle of Neopatras, but the fleet won a similarly comprehensive victory at the Battle of Demetrias.

As a rare manifestation of truly "Byzantine" diplomacy, Michael VIII secretly incited the Sicilian Vespers, a rebellion against Charles of Anjou in Palermo, and the invasion of the Sicily by the Catalans of King Peter III of Aragon. Michael VIII was forced to drain the treasury to pay the enormous bribe of 60,000 gold coins to King Peter III.[3] This halved the kingdom of Charles of Anjou, who was forced to spend the remainder of his life unsuccessfully trying to reassert his control over Sicily.

In reconstituting the Byzantine Empire Michael VIII restored the old administration without endeavouring to correct its failures. In recovering Constantinople and investing in the defence of his European provinces, Michael VIII began to denude the Anatolian frontier of its troops and was forced to lower their pay or cancel their tax exemptions. This policy led to the gradual collapse of the frontier, which was infiltrated by Turkish bands even before the death of Michael VIII in Pachomios village, Thrace in December 1282. The Palaiologan dynasty he established ruled the Byzantine Empire for almost two centuries, longer than any other in Roman history. Also, during his reign there was a temporary naval revival in which the Byzantine navy consisted of 80 ships. 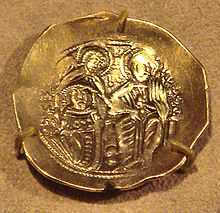 In 1253, Michael VIII Palaiologos married Theodora Doukaina Vatatzina, a grandniece of John III Doukas Vatatzes, Emperor of Nicaea. Orphaned in childhood, she was raised by her great-uncle John III, who was said to have "loved her like a daughter", and who arranged for her marriage to Michael. Their children were:

By a mistress, a Diplovatatzina, Michael VIII also had two illegitimate daughters: