Martius was born at Erlangen, where he graduated M.D. in 1814, publishing as his thesis a critical catalogue of plants in the botanic garden of the university. He afterwards devoted himself to botanical study, and in 1817 he and Johann Baptist von Spix were sent to Brazil by the king of Bavaria. They travelled from Rio de Janeiro through several of the southern and eastern provinces of Brazil, and ascended the Amazon River to Tabatinga, as well as some of its larger affluents.

On his return to Europe in 1820 he was appointed conservator of the botanic garden at Munich, including the herbarium at the Botanische Staatssammlung München, and in 1826 professor of botany in the university there, and held both offices till 1864. He devoted his chief attention to the flora of Brazil, and in addition to numerous short papers he published the Nova Genera et Species Plantarum Brasiliensium (1823–1832, 3 vols.) and Icones selectae Plantarum Cryptogamicarum Brasiliensium (1827), both works being finely illustrated. An account of his travels in Brazil appeared in 3 vols. 4to, 1823–1831, with an atlas of plates, but probably the work by which he is best known is his Historia naturalis palmarum (1823–1850) in 3 large folio volumes, in which all known genera of the palm family are described and illustrated. The work contains more than 240 chromolithographs, with habitat sketches and botanical dissections.[1] In 1840 he began the Flora Brasiliensis, with the assistance of the most distinguished European botanists, who undertook monographs of the various orders. Its publication was continued after his death under the editorship of A. W. Eichler (1839–1887) until 1887, and subsequently of Ignatz Urban. He also edited several works on the zoological collections made in Brazil by Spix, after the death of the latter in 1826. In 1837, he was elected a foreign member of the Royal Swedish Academy of Sciences.

On the outbreak of potato disease in Europe he investigated it and published his observations in 1842. He also published works and short papers on the aborigines of Brazil, on their civil and social condition, on their past and probable future, on their diseases and medicines, and on the languages of the various tribes, especially the Tupi. He died at Munich - his gravestone is decorated with two palm fronds and the Latin inscription In palmis semper virens resurgo. This botanist is denoted by the author abbreviation Mart. when citing a botanical name.[2] 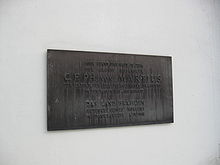 Memorial plaque for Martius in Munich, erected 1968 by the State of Brazil.

As well as a huge collection of flora specimens owned by Martius prior to his departure to South America, he returned with another 12,000 specimens which together formed the Herbarium Martii. At the time of his death the collection had been further expanded and comprised 300,000 specimens representing 65,000 species from around the world, and was one of the largest private herbaria assembled.

The Belgian government acquired the collection in 1870 which formed the basis of the then newly established Jardin botanique de l'Etat. The collection is now held as part of the National Botanic Garden of Belgium.

The Martius Project is an effort by the Botanic Garden to digitize the entire collection.[3]

Route followed in Brazil during 1817-1820 expedition 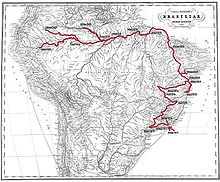 Martius and Spix, accompanied by Johann Christian Mikan who was with his wife and the artist Thomas Ender travelled to Brazil with the Austrian Commission, which joined the wedding train of Archduchess Leopoldina of Austria and Dom Pedro de Alcantara, the future Emperor of Brazil. The party left from Trieste on 10 April 1817.

Spix and Martius then spent some days at "Fazenda Mandioca" with Grigori Ivanovitch Langsdorff and then went to a fazenda near Rio Paraiba before returning to Rio. A mounted expedition took them on horseback to Itaguaí (13 December 1817) through São Paulo state state to the city of São Paulo where they arrived on 31 December 1817. They left on 9 January 1818 for Sorocaba and Itu on to Minas Gerais, then through Camanducaia to cross the Rio Sapucaí for São Gonçalo and Ouro Prêto. On 1 May 1818 they left for Diamantina, Minas Novas and then Montes Claros.

On 12 August 1818 they headed North-North East to Rio Carinhanha, as far as the Serra Geral then returned by Cocos to Carinhanha arriving at Rio de Contas on 17 October 1818, then riding east to cross the Rio Paraguaçu arriving at Salvador on the 10 November 1818, and leaving on 18 February 1819 via Coit and Jacobina. The party then travelled to Piaui, Oeiras where they arrived on 3 May. They departed on 11 May arriving on 15 May at São Gonçalo do Amarante, where Martius became seriously ill. Spix had at this time contracted the schistosomiasis, of which he eventually died.

On 3 June 1819 they arrived in Maranhão to replenish fonds and supplies. They then sailed down the Rio Itapicuru to São Luis from where they left on 20 July for Belém, arriving there on 25 July, having collected specimens at several places in between. They left Belém on 21 August for an Amazon voyage, up the Tocantins to Breves, arriving in Gurupá on 9 September and Porto de Moz on the Rio Xingu on 10 September. They spent the 19th-30 September in Santarém, arriving at Barra do Rio Negro on 22 October and leaving on 2 November. They reached Tefé, then called Ega, on 26 November, then split up.