The Multiple Integrated Laser Engagement System or MILES is used by the US military and other armed forces around the world for training purposes. It uses lasers and blank cartridges to simulate actual battle.

Individual soldiers carry small laser receivers scattered over their bodies, which detect when the soldier has been illuminated by a firearm's laser. Each laser transmitter is set to mimic the effective range of the weapon on which it is used. When a person is "hit", a medic can use the digital readout to determine which first aid method to practice.

Different versions of MILES systems are available both within the US and internationally. The capabilities of the individual systems can vary significantly but in general all modern systems carry information about the shooter, weapon and ammunition in the laser. When this information is received by the target, the target's MILES system determines the result of the 'hit' using a random number roll and a table lookup. As a result a MILES emulating an M16 rifle cannot destroy an Armored Personnel Carrier (APC), but could still kill a commander visible in the hatch of the vehicle. Vehicles are typically outfitted with a belt of laser sensors while dismounted troops often wear a vest or harness with sensors as well as a 'halo' of sensors on their helmets. Often these MILES systems are coupled with a real-time datalink allowing position and event data to be transmitted back to a central site for data collection and display. More sophisticated systems for tanks and APCs exist that use various techniques (including scanning lasers and coupled radio systems) to allow more precise targeting of armored vehicles.

Coincidentally, MILES is also the Latin word for soldier. 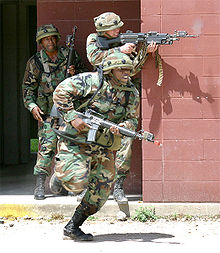 MILES simulation (note the laser emitters attached to the rifles' barrels, and the laser receptors on the soldiers' helmets and harnesses). 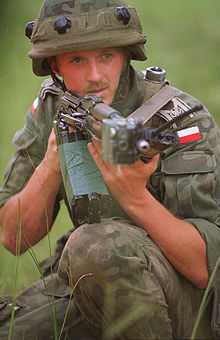 Circa 1980, MILES was introduced to the US Army for direct-fire, force-on-force training capability at home stations and combat training centers. It used a laser module which was mounted to the barrel of a real weapon, a blank-firing adaptor for the weapon, and an integrated receiver consisting of sensors on the helmet and load-bearing vests of the soldiers. When a blank shot was fired by a weapon, it caused the laser to fire a coded burst in the direction that the weapon was aimed. If that burst was sensed by the receiver of another soldier, the "hit" soldier's gear beacon making a beeping noise to let them know they were "dead." MILES had serious problems—when hit, the receiver did not prevent the further firing of the weapon, and it was tempting and easy for soldiers to "cheat" by turning the receivers off and back on again, resetting the system and therefore "respawning" or "resurrecting" themselves. In addition, no data about the engagement was kept so it was impossible to positively identify who shot whom on the battlefield, a critical piece of information when attempting to develop new tactics. MILES was also very encumbering and soldiers sometimes experienced neck pain when using it.

Later versions used a loud tone to signal when a soldier was "killed". In order to turn off the noise, the soldier had to remove a yellow key from his weapon, and insert it into the box on his harness. By removing the key from his weapon, his weapon could no longer score hits using the MILES system. With some systems the hit soldier is required to lie on his back to stop the noise and signal others that he is "dead".

MILES 2 was released in 1991 - 92, and the SAWE (Simulated Area Weapons Effects) add-on was first fielded in 1992 using GPS and RF messages so that vehicles and individual soldiers can be killed from a central location due to artillery strikes, or Nuclear, Biological, and Chemical weapons strikes. Implementation in the Summer and Fall of 1992 was at Hohenfels, Germany at the Combat Maneuver Training Center. In 1993, the range at Fort Polk was installed and tested. At the time, there were plans to add SAWE at the NTC at Fort Irwin, although instead this was implemented by using SAWE-like features via the DCI radio network. This was superseded in aircraft by the implementation of SMODIM (Smart Onboard Data Interface Module) instrumented in 1996 at all three training centers.

As of July 2010, the latest version of MILES is MILES XXI, provided by Lockheed Martin.[1]