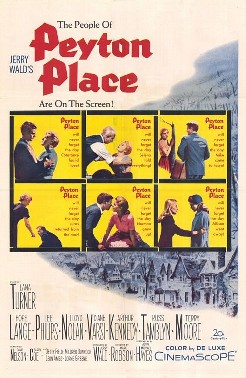 "Peyton Place" is a 1957 American directed by . The screenplay by is based on the bestselling 1956 novel of the same name by .

The film is an exposé of the lives and loves of the residents of a small mill town, where , , , , and moral hide behind a tranquil façade in the years immediately preceding and following . At the core of its plot are three women. is a prim and proper sexually repressed woman who had an affair with a married businessman and bore him a child out of wedlock. She has struggled to shield her daughter Allison, a high school senior and aspiring author, from her tarnished past, leading her to believe she returned to Peyton Place with her newborn baby after her husband died. , Allison's best friend, is a good girl living on the wrong side of the tracks. She murders her stepfather Lucas after repeated sexual abuse, and her trial is the focus of the latter part of the film.

Other characters include Allison's classmate and confidant Norman Page, a mama's boy anxious to gain his independence; bad girl , who longs to have a relationship with wealthy ; and new school principal , who attempts to crack Constance's icy veneer.

Less than a month after the book's release in 1956, producer bought the rights from author Grace Metalious for $250,000 and hired her as a story consultant on the film, although he had no intention of actually allowing her to contribute anything to the production. Her presence in Hollywood ensured the project additional publicity, but Metalious soon felt out of place in the film capital. Horrified by the sanitized adaptation of her book by screenwriter John Michael Hayes, who was forced to contend with the Hays Code, and his suggestion be cast as Norman Page, she returned to her home to . She eventually earned a total of $400,000 in profits from the film, which she hated ["The Bad and the Beautiful: Hollywood in the Fifties" by Sam Kashner and Jennifer MacNair, W.W. Norton & Company, Inc., 2002, pp. 248-251, ISBN 0-393-04321-5] . The film was shot primarily in , with additional exteriors filmed in Belfast and Rockland in Maine and Lake Placid in . It premiered in Camden two days before going into general release in the US on December 13, 1957.

"Peyton Place" was the second highest grossing film of 1958, although in the first few months of its release it did not do well at the box office, until a real-life tragedy gave it an unexpected boost. On April 4, 1958, star 's daughter Cheryl killed her mother's abusive lover, mobster Johnny Stompanato, and was placed in Juvenile Hall. The press coverage of the subsequent investigation boosted ticket sales by 32%, and the film eventually grossed $25,600,000 in the US. A coroner's inquest ruled the murder justifiable homicide, and the district attorney chose not to charge Cheryl with the crime, although he declared her a ward of the state and placed her in the custody of her grandmother. Turner feared the negative publicity would end her career, but it led producer to cast her in the 1959 film "Imitation of Life" ["The Bad and the Beautiful: Hollywood in the Fifties", pp. 259-261] .

The film inspired a popular primetime television series that aired from September 1964 until June 1969.

Most critics made note of the fact the most salacious elements of the Metalious novel had been laundered or eliminated completely. In the "", remarked, "There is no sense of massive corruption here." ["The Bad and the Beautiful: Hollywood in the Fifties", pg. 253] "Variety" noted, "In leaning backwards not to offend, producer and writer have gone acrobatic. On the screen is not the unpleasant sex-secret little town against which Grace Metalious set her story. These aren't the gossiping, spiteful, immoral people she portrayed. There are hints of this in the film, but only hints." [ [http://www.variety.com/review/VE1117793969.html?categoryid=31&cs=1&p=0 "Variety" review] ] "" said, "This is the kind of hypertensive trash that gives a bad name, cynically tempering its naughty bits with smug moralizing. The fact that the film won an "A" rating from the Catholic Legion of Decency, meaning it was deemed "acceptable to all," is a dead giveaway." [ [http://movies.tvguide.com/peyton-place/review/109114 "TV Guide" review] ]