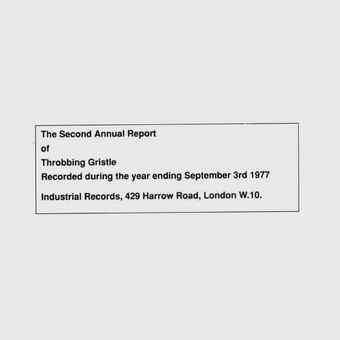 "The Second Annual Report" is a landmark release by pioneers . The album is a combination of live and studio songs. The album was originally released on 12" vinyl in 1977 and pressed to CD, with additional tracks, in 1991.

The vinyl edition enjoyed several different pressings. 's original pressing had 785 copies, while Fetish Records pressed 2000 copies. Fetish would press the album twice more after the original Industrial Records master plates were destroyed; the third edition was included in the five album Throbbing Gristle box set and was recut to play backwards and had a chamber orchestra added to "After Cease to Exist". The Fetish plates were reused to cut pressings made by and Celluloid Records (the latter of which was released without the band's permission.)