Royal Monogram as Consort of Norway

Princess Märtha was born in Stockholm the daughter of Prince Carl of Sweden and Princess Ingeborg of Denmark, Princess of Sweden. Following a year-long engagement, she was married to her cousin, The Crown Prince of Norway in Oslo Cathedral on 21 March 1929, and in doing so she became Her Royal Highness The Crown Princess of Norway and assumed precedence alongside her husband and behind his parents King Haakon VII and Queen Maud of Norway. Märtha's was the first royal wedding in Norway in 340 years.

The marriage, which is widely believed to have been a success due in large part to their genuine love and affection for one another, produced three children: Ragnhild (1930); Astrid (1932); and the much awaited heir, Harald (1937).

The Crown Princess was quickly taken into the hearts of the Norwegian people due to her easy-going, yet serene manner. Rather than indulge in the excesses of her lofty position, The Crown Princess was immensely humble, light-hearted and generous. One such example of this is shown in her desire to put into practice her skills as seamstress, sewing clothes for herself and her children. In 1939, shortly before the outbreak of World War II in Europe, the Crown Prince and Princess made a highly popular visit to the United States. The couple befriended President Franklin Roosevelt and his wife, Eleanor Roosevelt. During this visit, the couple conducted an extensive tour of the Upper Midwest, where many Norwegian immigrants had settled.

During the tour, Crown Princess Märtha was honored with initiation into the Delta Zeta sorority. She and her lady-in-waiting were pinned during the initiation ceremony at the University of North Dakota, by Delta Zeta national president, Myrtle Graeter Malott.[1]

Crown Princess Märtha, who contributed greatly in the mobilization work for Norway's self-protection, made a public announcement on 26 January 1940 in which she encouraged Norwegian women to take part in the mobilization work.[2] When Germany invaded Norway in April 1940, The Crown Princess and her children fled first to her native Sweden, however, she was not well-received. Many Swedes felt she had put Sweden's neutrality at jeopardy. Some even suggested she should accept the suggestion by the Germans, and return her three-year-old son, Prince Harald, to Norway so he could be proclaimed King by the Germans. This was never seen as an option for Princess Märtha. Following an invitation by President Roosevelt, she went to the United States on the USS American Legion, via the then Finnish port city of Petsamo. In the U.S., she and her children initially took up residence in the White House.

Crown Prince Olav, however, had gone with his father, The King, to the United Kingdom, where he worked with the Norwegian government-in-exile. Thus, The Crown Couple, as were many couples during the time, were separated for much of the war.

In August 1941, Crown Princess Märtha traveled with President Roosevelt aboard the presidential yacht, USS Potomac (AG-25), and sailed to Newfoundland and Atlantic Charter with Winston Churchill.

The friendship that The Crown Couple had cultivated with the Roosevelts was further developed during the war years. In 1942, the U.S. presented the Norwegian forces with the gift of a U-boat, which was received by Crown Princess Märtha, who in her reply gave a speech in support of the Norwegian liberation [3] Her impressive work to assist the American Red Cross and on behalf of Norwegian interests greatly impressed Roosevelt and influenced his "Look to Norway" speech in 1942.

Princess Märtha spent much of World War II in the United States, where she worked tirelessly to keep up support for Norway among the American public and government. In 1942, she visited London to take part in the birthday celebration for her father-in-law. When she returned to Norway following the war in 1945, she received a hero's welcome and was referred to as "Mother of the Nation". She wholly embraced her role as The Crown Princess of Norway and made tremendous efforts towards ensuring the stability and well-being of all Norwegians.

Following a lengthy period of ill-health, Märtha died of cancer in Oslo. Her death came little more than three years before her husband ascended the throne as King. 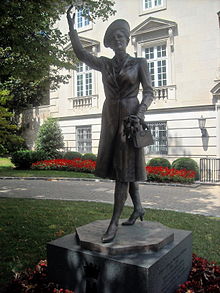 A 970,000 km² area in Antarctica is named Princess Martha Coast in her honor.

A statue of the princess was erected outside the Norwegian embassy in Washington, D.C. in 2005. In 2007, a replica of the statue was erected in the courtyard of the Royal Palace in Oslo.

Crown Princess Märtha’s Memorial Fund is a charitable trust administered by the Norwegian Crown. The Crown Princess's youngest daughter, Princess Astrid, serves as chairperson. Initially established as Her Royal Highness Crown Princess Märtha’s Fund on 1 April 1929, the fund "is to provide financial support to social and humanitarian initiatives carried out by non-governmental organizations." In 2005, the Fund had assets of approximately 28 million Norwegian krone (NOK), and issued grants totaling about 1.5 million NOK for roughly 300 recipients.[5]

Titles from birth to death

Below is a list of the styles carried by Crown Princess Märtha from birth to death, in chronological order: