Ujjain
This article is about the municipality in Madhya Pradesh, India. For its namesake district, see Ujjain District.

pronunciation (help·info) (also known as Ujain, Ujjayini, Avanti, Avantikapuri), is an ancient city of Malwa region in central India, on the eastern bank of the Kshipra River (Hindi: क्षिप्रा), today part of the state of Madhya Pradesh. It is the administrative centre of Ujjain District and Ujjain Division.

In ancient times the city was called Ujjayini. As mentioned in the Mahabharata epic, Ujjayini was the capital of the Avanti Kingdom, and has been the Prime Meridian for Hindu geographers since the 4th century BCE. Ujjain is one of the seven sacred cities (Sapta Puri) of the Hindus, and the Kumbh Mela religious festival is held there every 12 years. It is also home to Mahakaleshwar Jyotirlinga, one of the twelve Jyotirlinga shrines to the god Shiva and is also the place where Lord Krishna got education with Balarama and Sudama from Maharshi Sandipani.

The earliest references to the city, as Ujjaini, are from the time of the Buddha, when it was the capital of the Avanti Kingdom. Since the 4th century B.C. the city has marked the first meridian of longitude in Hindu geography. It is also reputed to have been the residence of Ashoka (who subsequently became the emperor), when he was the viceroy of the western provinces of the Mauryan empire.

In the Post-Mauryan period, the city was ruled by the Sungas and the Satavahanas consecutively. It was contested for a period between the Satavahanas and the Ror Sakas (devotees of Shakumbari), known as Western Satraps; however, following the end of the Satavahana dynasty, the city was retained by the Rors from the 2nd to the 4th century CE. Ujjain is mentioned as the city of Ozene in the Periplus of the Erythraean Sea, an antique Greek description of sea ports and trade centers in the western Indian Ocean. Following the enthroning of the Gupta dynasty, the city soon became an important seat in the annals of that empire. Ujjain is considered to be the traditional capital of King Chandragupta II, also known as Vikramaditya, at whose court the nine poets known as the navaratna (nine jewels) of Sanskrit literature are said to have flourished.

In the 10th and 11th centuries, Ujjain was a major centre of mathematical and astronomical research. The famous mathematicians who worked there included: Brahmagupta, whose book Brahmasphutasiddhanta was responsible for spreading the use of zero, negative numbers and the positional number system to Arabia and Cambodia; Varahamihira, who was the first to discover many trigonometric identities; and Bhaskaracharya, or Bhaskara II, whose book Lilavati broke new ground in many areas of mathematics.

Ujjain was invaded by the forces of the Delhi Sultanate led by Iltutmish in 1235, suffering widespread destruction and systematic desecration of temples. Under the Mughal emperor Akbar it became the capital of Malwa. During the last half of the 18th century Ujjain was the headquarters of the Maratha leader Scindia. The Scindias later established themselves at Gwalior, and Ujjain remained part of Gwalior state until Indian Independence in 1947. Gwalior state became a princely state of the British Raj after the Maratha defeat in the Third Anglo-Maratha War, and Gwalior, Ujjain, and the neighboring princely states were made a part of the Central India Agency. After Indian independence, the Scindia ruler of Gwalior acceded to the Indian Union, and Ujjain became part of the Madhya Bharat state. In 1956 Madhya Bharat was merged into the Madhya Pradesh state. 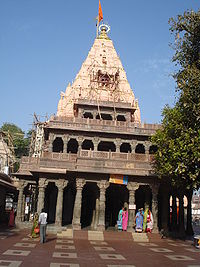 Among Seven Holy Cities of India

Moreover, Ujjain is one of seven most holy places for Hindus in India where Varanasi is considered as the holiest of the seven holy cities.

A Kṣetra is a sacred ground, a field of active power, a place where Moksha, final release can be obtained. The Garuda Purana enumerates seven cities as giver of Moksha. They are Ayodhya, Mathura, Māyā, Kāsi, Kāñchī, Avantikā and Dvārāvatī.[1]

Since Ujjain is one of the oldest cities in India, it has been known by many names:[2]

It is said that to the Western astronomers it was known as "Arin".[citation needed]

Ujjain is situated on the Malwa Plateau in Central India. The soil is black and stony. The vegetation is typical of arid regions with thorny trees like babul and acacia dominating the landscape. Soybean, wheat, jowar and bajra are the main crops grown.

Ujjain experiences a warm sub-tropical climate, typical of the interior Indian subcontinent. Summer starts in late March with temperatures rising to 45°C at its peak in May. In addition, hot winds (called loo) may blow in the afternoons, adding to the discomfort. The monsoon arrives in the middle of June and continues till early October. About 870mm (35 inches) of precipitation is received during those months.

The rest of October generally is very warm and with high humidity. Winter starts in the middle of November and is pleasant and cool with daytime temperatures typically 20°C, though temperatures can drop significantly in the night.

Ujjain city has two legislative assembly zones, known as Ujjain North and Ujjain South. For Parliamentary purposes it is treated as one seat. There are 54 wards in ujjain. ward members are elected by peoples directly. At present oct. 2010 Mr. Rameshwar akhand of B.J.P. is mayor of Ujjain .

The economy of Ujjain is mainly dependent on the agricultural activities of the nearby villages. Two main crops are grown each year: wheat as the major Rabi crop, soybean as the major Kharif crop. Ujjain agriculture is sensitive to changes in rainfall and failure of monsoon cycles can lay a devastating toll on agriculture and the local economy.

Ujjain was previously a major industrial area having steel plant,soyabeen oil plant,shree synthetics ltd.and a dalda mill and was a great centre of the textile industry with a number of textile mills in the city. Almost all the mills have since closed. Religious tourism is also a contributor to the economy, especially during the Simhasta Mela.

A number of new infrastructure projects are under construction. SAIL has plans to operate a Special Processing Unit[5] from Ujjain to cater to regional supply. With cheaper land & labour costs Ujjain is creating enough attention for new investments.

Ujjain also generates huge revenue from the boost given to the economy by the holy fair of Kumbh Mela locally known as Simhastha. 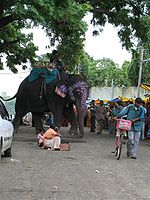 An elephant outside the Mahakaleshawar temple in Ujjain

Ujjain is well-connected by rail, air and road. It is on the Western Railway and is connected by direct train to most major Indian cities.Ujjain has an air strip. The nearest airport is Indore Airport.The road network is developed with other parts of Madhya Pradesh.Ujjain is connected to Indore through SH-27 and SH-18 Dewas-Badnawar passes through it. Unfortunately Ujjain is the largest city which has no national highway.

There are four railway stations:

Primary and secondary education in Ujjain is offered by various schools which are affiliated to either Madhya Pradesh Board of Secondary Education or CBSE.

There are 84 Gods of Ujjain, Chaurasi Mahadev (Shiva), out of them four are the dwarapalas of Mahakala Ujjain. The four dwarapalas are Pingaleshwara (East), Kayavarohaneshwara (South), Vilveshwara (West) and Dardareshwara (North). The Chaurasi Ishwaras are: