The Duramax is General Motors diesel engine family for light- and medium-duty trucks, designed by General Motors. The 6.6 liter Duramax is produced by DMAX, a joint venture between GM and Isuzu in Moraine, Ohio. This engine was initially installed in 2001 model year Chevy and GMC trucks and has been an option since then in pickups, vans, and medium-duty trucks. In 2006, production at Moraine was reportedly limited to approximately 200,000 engines per year.[1] On May 9, 2007, DMAX announced the production of the 1,000,000th Duramax V-8 diesel at its Moraine facility.[1] 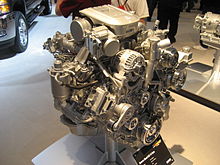 RPO LB7 (engine code "1") was first introduced in 2001 and continued until mid 2004. It is a 32-valve design with high-pressure common-rail direct injection and a experimental composite design cylinder head. The most problematic issue with the LB7 is injector failure. Fuel leaked and entered the crankcase, causing oil dilution. Early on customers came forward complaining of severe overheating, and also in some situations blown head gaskets. Initially GM denied it was a problem, but after being sued by a consumer group, GM relented and included overheating and blown head gaskets as a warranted item. GM issued a warranty for this after the fact for injectors, which now have 7 year/200,000 mile coverage. The following trucks use the LB7:

The LLY (internally called the 8GF1) (engine code "2") is a 6,599 cc (402.7 cu in) turbocharged engine which debuted in mid-2004 and continued until the end of 2005. It is a 32-valve design with high-pressure common-rail direct injection and aluminum cylinder heads. The LLY was GM's first attempt to implement emissions requirements on their diesel trucks. To meet this goal they turned to a newly developed Garrett turbocharger with a variable geometry vane system and they installed an Exhaust Gas Recirculation valve or (EGR Valve). Learning from problems with injectors in the previous LB7 GM changed the valve covers to allow access to the injectors without having to remove the valve covers, saving significant labor costs if injector replacement became necessary.

The 2006 LLY (engine code "2") debuted in the beginning of 2006 and ended production with the start of the 2007 calendar year. Mechanically it is identical to the LBZ and is mated to the new 6 speed Allison transmission however it retained the LLY designation.

The LBZ (engine code "D") debuted in late 2006 and continued into 2007 sold only in the "classic" body style. It has a more powerful tune loaded into the computer that allows it to produce more power and torque.

(Diesel Oxidizing Catalyst) where the fuel is burned to elevate the temperature of the exhaust. This hot exhaust flows into the DPF and burns the trapped soot.

A version was used in Trident Iceni.[4]

This engine is not yet commercially launched although it was touted in the automobile press as one of the most important new engine concepts for small trucks and SUVs by finally delivering a capable diesel engine in a compact enough package. The engine project is current on indefinite hold by GM. General Motors planned a 4.5 litre 72-degree[8] V8 for light-duty applications which would be built at GM's powertrain facility in Tonawanda, New York after 2009. Designed to fit in the same space as a Chevrolet Small-Block engine, it is expected to produce over 310 bhp (230 kW) and 520 lb·ft (705 N·m) of torque. It added urea injection, 29,000-psi (2,000 bar) piezo-electric common-rail fuel system over previous Duramax architecture.[9]

It was initially targeted for the Chevy Silverado/GMC Sierra and Hummer H2.[10] Unlike previous Duramax engines, the 4.5 liter is planned to be designed and built entirely by GM, without assistance from Isuzu.[11]

As of March 2009, a GM spokesperson stated the engine project has been put on an "indefinite hold" due to current economic conditions.[12]

The 6.6L RPO LML (VIN code "8") is the latest version (2011–present) of the Isuzu/GM Duramax V8 diesel engine and actually a further advanced version of the LMM engine with the majority of the changes addressing a required drastic reduction in engine emissions. Some mechanical aspects of the engine, such as piston oil flow design for improved temperature control and oil pump design, were also improved to enhance durability even further.

The LML engine was significantly updated for 2011 to provide improved exhaust emissions that comply with the new federal emission standards for diesel engines, provide better engine rigidity and further noise reduction. New 29,000 PSI piezo injectors, a complete fuel system-hardening to tolerate up to 20% biodiesel mixtures and urea injection (to reduce Nitrogen oxides) with a 5.3 gallon urea tank are updating the fuel and emissions systems. This engine also has now 9 fuel injectors, one directly injecting in the exhaust tract, to allow raw fuel injection during the particulate filter recycling routine. The RPO LML engine is rated at 397 horsepower at 3000 rpm and 765 lb.-ft. of torque at 1600 rpm.[13]