The Dubai Police Force is the 15,000 strong[1] police force for the city of Dubai, in the United Arab Emirates. They come under the jurisdiction of the Vice President and Prime Minister of the UAE (who in turn is the ruler of Dubai), and they cover an area of 4,114 square kilometres and a population of 1,321,453 people.

The Dubai Police force was founded on June 1, 1956 in Naif (a locality in the Deira side of Dubai, with the first police station being known as 'Naif Fort'[2]) with only 29 members. The size of the force increased gradually, to 105 in 1960 and to 430 by 1967.[3] In 1973, the force moved its headquarters to their current location of Al Towar, on Al Etihad Street in Dubai. At present, a further move is being planned to a newly constructed headquarters, again in Deira.

The new headquarters for the Dubai police is planned to be constructed in Deira, the premises were designed with several considerations in mind. As well as making easy access for both officers and members of the public a priority, the new design aims to separate the departments into different areas. The building is also to feature a central, multi-level internal space, and is designed to fit in with the developing architecture of surrounding Dubai, the Dubai police force describe it as a 'distinguished constructional conception'. 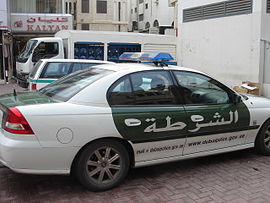 The Dubai police force operates under a General Commander and his deputy, who in turn work under the Police Chief and his own deputy. The General Commander forms part of an organizational office which, with a Decision Making Support Centre, organises fifteen separate departments:

The General Department of Operations

This is the heart of the Dubai Police force. Round the clock telephone lines help to electronically control all patrols from this department, with 2,000 land lines and 178 fax machines,[6] and utilising wireless equipment to locate both car and foot patrols. The department also coordinates all emergency responses as well as search and rescue operations on land and sea.

The General Department of E-Services

This department is another integral part of the police force, as well as being the most recent department to be created. It was established in 2001 as part of the aims of Sheikh Mohammed Bin Rashid Al Maktoum, Prime Minister of the United Arab Emirates, to form a totally electronic government. In 2008 30% of UAE national are assigned to work in the E-services Department to fulfill their duty.

The General Department of Criminal Investigation

This is the primary crime fighting department of the Dubai Police, its objectives are laid out by as follows:

Other departments of the Dubai Police force include:

There are currently ten Dubai police stations in the city.[4] 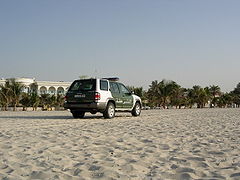 A police car on Dubai's beaches

The standard uniform of the Dubai police officer is an olive green shirt with a red band running under the left arm and looped through the left epaulette, a dark green beret with a golden badge depicting the logo of the police force, olive green trousers and black boots. Alternatively, officers wear a light brown shirt and trousers, though the rest of the uniform remains the same. High ranking officers wear a combination cap and rank badges on the collar. In Dubai, the male police officers are armed with batons, and female officers carry semi-automatic hand guns.

The Dubai police vehicles are painted with a white and dark green colour scheme, with all blue emergency lights. Every Dubai police vehicle has the force's website and email addresses printed on it.[7] As well as police cars, the force also employs motorcycles, helicopters and boats.

The Dubai Police Academy was founded in 1987, and was granted autonomy from the police force as long as it retains some affiliation with Dubai Police General Headquarters. It was fully inaugurated in 1989 in the presence of Sheikh Maktoum Bin Rashid Al Maktoum. In 1992, degrees offered by the academy were made equal to degrees from universities.

The first class was from 1987 to 1988, and consisted of 51 cadets and 30 full-time students, some of whom were existing police officers. they graduated in 1991. During the academic year of 1996-1997, students from other Arabic countries such as Yemen and Palestine were admitted.

The Dubai Police Museum is located at Al Mulla Plaza opened and opened on November 19, 1987. It comprises three exhibit halls, as well as documenting anti-drug efforts of the police force, and the force's prison systems. On November 19, 1987, the International Council of Museums placed the museum on the record of Arab Museums.[8]