Matt Cooke
For other people of the same name, see Matt Cooke (disambiguation).

Matthew David Cooke (born September 7, 1978) is a professional ice hockey player currently playing for the Pittsburgh Penguins of the National Hockey League. His playing style has earned him a reputation of being a "pest" and he is known for his ability to aggravate opponents. Cooke has been suspended repeatedly during his career for delivering blind-side hits and head-shots that injured opposing players, and his track record was an important factor influencing NHL rule changes intended to deter such conduct. Cooke won the Stanley Cup with Pittsburgh during the 2008–09 NHL season. Although he is no longer a member of the Vancouver Canucks' organization, he is still active in the Vancouver community with his wife as they run The Cooke Family Foundation of Hope.[1]

Cooke played major junior in the Ontario Hockey League for three seasons predominantly with the Windsor Spitfires prior to playing professionally. Recording an impressive 95-point (10th overall in the league), 146-penalty-minute campaign in his second OHL season, he was drafted 144th overall by the Vancouver Canucks in the 1997 NHL Entry Draft. Returning to the OHL for a third season after being drafted, he was traded from Windsor to Kingston on December 17, 1997, in exchange for Brent L'Heureux. Cooke would finish the season and his OHL career with Kingston. 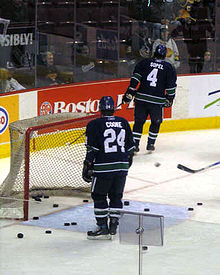 Cooke with the Vancouver Canucks in 2007.

Typically playing in the role of a checking winger, Cooke recorded a career-high 42 points in 2002–03 and earned the Fred J. Hume Award as the team's unsung hero.[2] Continuing to show offensive capabilities, after returning from an injury in 2003–04, he was promoted to the Canucks' top line towards the end of the season. On account of Todd Bertuzzi's infamous suspension, Cooke joined Markus Naslund and Brendan Morrison on the Canucks' top line for the final thirteen games of the season and the playoffs.[3]

Perhaps Cooke's most memorable moment with the Canucks occurred during this stint on the first line as the Canucks entered the 2004 playoffs against the Calgary Flames. With the Canucks down by a goal in the final minute of the series-deciding seventh game, Cooke drove the net on a Markus Naslund rush and dramatically tied the score with 5 seconds to go in regulation – it was also Cooke's second goal of the game. However, as the Canucks were short-handed at the time, Calgary began the overtime period on the powerplay and clinched the series.[4]

After a year of inactivity on account of the 2004–05 NHL lockout, Cooke would play two more full seasons with the Canucks, scoring at a similar pace. However, with Cooke's contract set to expire at the end of the 2007–08 season, he was sent to the Washington Capitals in exchange for Matt Pettinger at the trade deadline. The trade ended Cooke's tenure with the Canucks in his ninth season with the club. At the time of the trade, he was 12th all-time in games played as a Canuck with 556.[5]

Finishing the 2007–08 season, Cooke would play 17 games with the Capitals, scoring 7 points. In the off-season, on July 5, 2008, Cooke signed a two-year, $2.4-million contract with the Pittsburgh Penguins.[6] He injured his ribs in his first season with the Penguins in October, missing four games, but was able to return by the end of the month.[7] On December 2, 2008, he was named to the rotating position of alternate captain for the Penguins for the month of December.[citation needed] The next month, Cooke was suspended for two games on January 27, 2009, for a headshot that he delivered to Carolina Hurricanes forward Scott Walker seven days earlier. He was assessed a minor penalty for interference on the play.[8] He earned a Stanley Cup with Pittsburgh in 2009.

Cooke set a new career high during the 2010 Stanley Cup Playoffs by scoring four postseason goals, two of those coming in the decisive Game 6 against the Ottawa Senators at Scotiabank Place.[9] On June 22, 2010, Cooke signed a three-year contract to stay with the Pittsburgh Penguins, a deal worth $1.8 million per season.[10]

During his career Cooke has been criticized by the media, league and team executives and other players for his hitting in ways more likely to cause injury such as hits to the head.[11][12] In the 2008–09 season, Cooke was suspended on two different occasions. In November, he received a two game suspension for a check to the head of New York Rangers' Artem Anisimov. In January 2009, he received another two game suspension for a hit to the head of Scott Walker, at the time with the Carolina Hurricanes.[13]

On March 7, 2010, in a game against the Boston Bruins Cooke delivered a blow to the head of Boston's Marc Savard, causing a concussion and Savard to miss almost two months. Cooke said he was not intending to hurt Savard; [14] however, Bruins GM Peter Chiarelli characterized the hit as "a very surgical hit to the head."[15] Fellow Penguin teammate Bill Guerin also analyzed Cooke's hit on Savard to Pittsburgh reporters.[15] "If a guy gets hurt like that with a shot to the head, there's got to be something," said Guerin, adding that he expected Cooke to be suspended. "I understand he (Cooke) is on my team but, hey, he's in a tough spot."[16] In a ruling, which has received wide criticism,[15][17] Cooke was not given a suspension for the hit on Savard.[18] NHL Commissioner Gary Bettman commented on a radio talk show regarding the Cooke hit on Savard. "I was very unhappy and upset with that hit," said Bettman. "I was more upset there was nothing (in the League rules) to do to punish it."[11] On March 24, 2010, the league implemented a new rule aimed at prohibiting hits to the head. In announcing the rule, Bettman said, "The elimination of these types of hits should significantly reduce the number of injuries, including concussions, without adversely affecting the level of physicality in the game."[12][19]

On February 9, 2011, Cooke was given a four-game suspension for a hit from behind on Columbus Blue Jackets' defenseman Fedor Tyutin.[20] On March 21, Cooke was suspended for the final ten games of the Penguins regular season schedule as well as the first round of the 2011 Stanley Cup playoffs stemming from an elbow to the head of New York Rangers defenseman Ryan McDonagh.[21] The suspension was the longest of Cooke's career and was supported by the Pittsburgh Penguin management. Speaking to two Pittsburgh newspapers the day after, Cooke apologized for the hit. "I realize and understand, more so now than ever, that I need to change," Cooke said.[22]

Cooke made his first international appearance, playing for the Canadian national junior team at the 1998 World Junior Championships. He scored 2 points in 6 games, but could not help Canada win a medal, losing to Russia in the quarter-finals. He then competed for Team Canada at the 2004 World Championships. Named to the team with Vancouver Canucks teammate Brendan Morrison, Cooke helped Canada clinch gold, tallying 4 points in 9 games.

Cooke and his wife Michelle, whom he married in 2001, have 3 children;[23] a daughter named Reece Lynn Cooke and a son named Jackson Cooke. Michelle has another daughter, Gabby, whom she had in a previous relationship. Cooke and Michelle run a foundation called The Cooke Family Foundation of Hope,[1] based out of Vancouver.