For other uses, see Dahlem (disambiguation).

Dahlem is a locality of the Steglitz-Zehlendorf borough in southwestern Berlin. Until Berlin's 2001 administrative reform it was a part of the former borough of Zehlendorf. Dahlem is one of the most affluent parts of the city and home to the main campus of the Free University of Berlin with the 2005 Philological Library ("The Brain") by Norman Foster as its new landmark. Several other institutions of higher education and research, the Berlin Botanical Garden (officially on the ground of neighbouring Lichterfelde) and many museums are located here. On weekdays the area is busy with students who arrive on the U-Bahn. In the west parts of the Grunewald forest belong to Dahlem including the Renaissance Grunewald hunting lodge built in 1543. 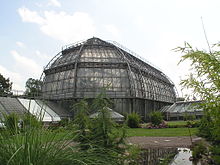 The first written account of Dahlem dates to the year 1275. The history of the village is connected to the Dahlem Demesne (Domäne Dahlem) first mentioned in 1450. Its estates were sold to the state of Prussia in 1841 and developed by dividing it into lots for building villas and mansions. The Demesne buildings today house a working farm and an agricultural open-air museum. In 1920 the village was amalgamated into Greater Berlin. From 1931 on Martin Niemöller, a leader of the Confessing Church, was pastor of the United Protestant Sankt-Annen-Kirche until he was arrested by the Nazis in 1937.

During the Cold War Dahlem belonged to the American Sector of West Berlin. From 1945 to 1991 the seat of the Allied Kommandantura of Berlin was in Dahlem on Kaiserswerther Straße. Until 1994 the headquarters of the United States Army Berlin command and the Berlin Brigade were located on Clayallee street. Parts of the building are still used by the Embassy of the United States in Berlin. The former library and Outpost theatre across the street today house the (West-)Allied Museum. Because so many of Berlin's artistic, cultural, and educational institutions were located in the city's historical centre in then East Berlin, West Berlin authorities established many duplicates in Dahlem - above all the Free University in 1948, which continued in part the tradition of the Kaiser Wilhelm Institute, founded 1911 in Dahlem.

Rudi Dutschke, spokesman of the German student movement in the 1960s, is buried at the cemetery of the Sankt-Annen-Kirche.