I Fought the Law

I Fought the Law 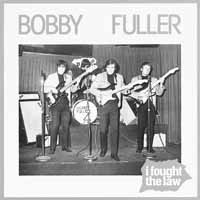 "I Fought the Law" is a much-covered song originally recorded by and (post Buddy Holly) in 1959. The song was famously covered by , who recorded a more successful version of the song in , and , who recorded a punk rock version in 1978.

Just as the song became a top ten hit, Bobby Fuller was found dead in a parked automobile near his home. The police considered the death an apparent ; however, many people still believe Fuller was murdered.

The , in particular, wrote and recorded a different version as a comment on 's murder of and City Supervisor , and White's subsequent use of the "" to influence the court to convict him of the lesser charge of . The song, sung from White's perspective, replaced the line "I fought the law and the law won" with "I fought the law and I won". In 1989 During Operation Just Cause, when the U.S. Army had Panamanian dictator confined to the Papal Nunciature, the Vatican's Embassy, and were attempting to flush him out. US ARMY PSYOPS Units surrounded the compound and used several psychological tactics to include flood lights and loud speakers. They played music like "I Fought the Law" loudly and repeatedly from the loudspeakers. When presidential press secretary was asked about the appropriateness of this at a press conference, he replied to the effect that it was a refreshing illustration of Americans' sense of humor. Fact|date=February 2007

The Bobby Fuller Four version of this song is ranked #175 on 's list of the 500 Greatest Songs of All Time.

It was the existence of a 45 of the Bobby Fuller version in an American studio jukebox [The band were completing work on their second album, "", at the time; Fuller's version had not been a hit single in the UK.] that inspired to record a cover version of the song in . Their version first appeared on the EP "The Cost of Living" in May in the UK, and then later in was made part of the American edition of the Clash's eponymous album. This cover version helped gain their first taste of airplay in the States and is one of the best-known cover versions of the song. The live recording of the song, performed at the Lyceum Theatre, West End, on , , features as the last piece of the film "Rude Boy" directed by Jack Hazan and David Mingay. The Clash were dressed all in black for that gig and the song, at that stage, was being considered as the film's title song. [cite video
people = Hazan, Jack; David Mingay, Ray Gange, , Mick Jones, , Nicky Headon, Buzzy Enterprises, Epic Music Video
year2 = 2006
title = Rude Boy
medium = Documentary, Rockumentary
publisher = Epic Music Video
location = New York, NY, United States
accessdate = 2008-01-09
isbn = 0738900826
oclc = 70850190
quote = 2nd edition digitally restored and remastered sound. ] [cite book
last=Green
first=Johnny
coauthors=Garry Barker
title=A Riot of Our Own: Night and Day with The Clash
origyear=1997
accessdate=2007-11-20
edition=3rd edition
year=2003
publisher=Orion
location=London
isbn=0752858432
oclc=52990890
pages=pp. 149-150 ] [cite book
last=Salewicz
first=Chris
title=Redemption Song: The Ballad of Joe Strummer
origyear=2006
accessdate=2008-01-22
edition=1st American ed
date=2007-05-15
publisher=Faber and Faber
location=New York
isbn=057121178X
oclc=76794852
pages=p. 246 ] [cite web
url=http://www.theclash.org.uk/RudeBoy.htm
title=Rude Boy
last=Whistance
first=Don J
publisher=theclash.org.uk
quote=10 I Fought the Law: The Lyceum, West End, London on the 28th December 1978 was where the last piece of filming took place which included Sonny Curtis's song: "I Fought the Law"
The Clash dressed all in black for the gig and played 'I Fought The Law ', which at that stage was being considered as the film's title song.
accessdate=2008-01-22
] In , re-issued the single (catalog number) in 7" vinyl format, with "City of the Dead" (2:24) and "1977" (1:40) as its B-side. The song is featured as a downloadable track in the video game "Rock Band". [cite web
url=http://arstechnica.com/journals/thumbs.ars/2007/12/11/new-punk-songs-come-to-rock-band
title=New punk songs come to Rock Band
accessdate=2008-01-03
last=Kuchera
first=Ben
date=2007-12-11
publisher=Ars Technica
quote="I Fought the Law" - The Clash ] Single infobox
Name = I Fought the Law 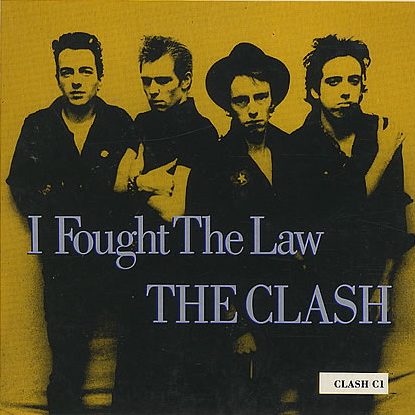 The song has also been performed, either in concert or on record, by the who did a version with different lyrics. The London Gangster who sang alongside Scottish pop-punks Mute fronted by who wrote an updated version complete with lyrics based on Dave's legendary court case. Both this and the Dead Kennedys' version are titled "I Fought the Law and I Won". Also, She Trinity, , , , , , , Stiff Little Fingers, , , , , , The , , , , , , the , /, , , , , , , and numerous other artists have covered this song live or in studio. For the 2003 film, "Intermission", recorded a version of the song, singing it in the guise of his character in the film.

The cover version of the song was used in a television ad for 's Store when it was first opened.

An amended version of the song reached number 25 in the UK singles chart in January 2008. "I Fought the Lloyds" by Oystar was a comedy version in support of the campaign by Lloyds TSB customers mounting legal challenges to get their charges refunded. In this version the key line was changed to "I Fought the Lloyds and Lloyds lost".

n punk rock band recorded a cover version of the song featuring lyrics in entitled "Ne mogu više" on their live album "Live KST" and dedicated it to former president .

* The opening instrumental of 's version was used as the theme tune of "".
* In the game "", the main character, Nick, has a quote that can be heard, when he arrests or defeats an enemy, he will sing: 'You fought the law and the law won.'
* in the 1990's once produced a montage of player with this song in the background.
* Canadian teen drama named an episode after this song.
* In the video game "", one of Bart's various quotes throughout the game is, "I fought the law and I won!"
* In the last episode of the canceled "Dark Angel" series, the character called Alec quotes "I fought the law and the law won."
* In the game "Bully" (also known as "Canis Canem Edit"), the prefects will occasionally say "You fought the law and the law won".
* The song is mentioned in "Lil' Cal's Big Mistake" by on their album "Round Trip".
* It was sung briefly by Bruce McGill's character in the "" episode "Out Where the Buses Don't Run".
* The song is used for the trailer and commercials advertising "".
* The song is found on the soundtrack of the PC game "".
* The second season "Crime Story" episode "Pauli Taglia's Dream" features Bobby Fuller's version of the song. In several parts of the titular dream, Pauli Taglia lip-synchs to the song.
* The song was prominently featured in an episode of "".
* Seattle DJ parodied the song as "I Fought the Lawn."
* When announced in 2005 that they were canceling the show "Crossfire" for reasons similar to those expressed by when he appeared on the show, Stewart said soon after on "", "I fought the law, and the law lost!"
* In the Metric song , there's a play on the line 'I fought the law and the law won' - instead, lead singer sings 'I fought the war and the war won'.
*In Bobby Fuller's famous version, the line goes "Robbing people with a six gun"; but in the original Cricket's version, the gun in question was a "", a home-made pistol using a rubber band as a firing mechanism.
* mentions Fuller and quotes the song in his own song "Dirt" on the album .
* , in "," sings "There was Frankie Lymon-Bobby Fuller-Mitch Ryder(They were Rockin')."
* The Clash's version of the song is available as downloadable content for the "Rock Band".
* The title is mentioned in the Beastie Boys song Rhymin' & Stealin', "I fought the law, and I cold won."
* The Clash version is played when and are on their way to a crime scene in the drama series "Ashes to Ashes".
* The Quebec Band "Les Dorothee" is making a reference to "I fought the Law" in the song ' Reggae ' on the disk ' Danse et explose '
* On "" episode The Marines Master Shake says after deserting his service "I fought the law and I won".
* The Clash version of the song is played extensively over a montage of The Doctor running from a large claw in the episode 'Oods and Ends' which accompanies the episode .
*In "", this song is heard in a cover version of . It is available as a soundtrack.
*In "", an episode of , leads a sing-a-long of the song on a prison bus.