The Military of Djibouti consists of the Djibouti National Army (includes Navy and Air Force).

The Military of Djibouti is officially referred to as the Djibouti Armed Forces (Forces Armees Djiboutiennes, FAD). It includes the Djibouti National Army, which consists of the Coastal Navy, the Djiboutian Air Force (Force Aerienne Djiboutienne, FAD), and the National Gendarmerie (GN).[3]

Djibouti has fought in clashes against Eritrea over the Ras Doumeira peninsula, which both countries claim to be under their sovereignty. The first clash occurred in 1996 after a nearly two-months stand-off. In 1999, a political crisis occurred when both sides accused each other for supporting its enemies. In 2008, the countries clashed again when Djibouti refused to return Eritrean deserters and Eritrea responded by firing at the Djiboutian forces. In the following battles, some 44 Djiboutian troops and some estimated 100 Eritreans were killed.

There is also Combined Joint Task Force - Horn of Africa, a U.S. force of more than 3,500, currently deployed in the country at Camp Lemonnier.[4]

Currently, approximately 170 soldiers of the JGSDF and the JMSDF are currently stationed in Djibouti, with their base and naval port recently opening in July 2011.[5][6] JSDF soldiers are based in the "Japanese Facility for Counter-Piracy Mission in Djibouti." and are planned to be based in Djibouti for 10 years as a relay station for any JSDF deployment in East Africa.[7][6] 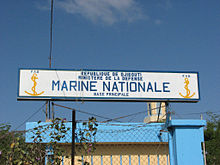 Sign outside the Ministry of Defense main base in Djibouti.