One of the oldest records in the Archives nationales : parchment dated December 23, 695. King Childebert III rules that the land of Hodenc-l'Évêque (Oise) belongs to the Abbey of Saint-Denis.

The Archives nationales (French for "National Archives") preserve the national archives of the French state, apart from the archives of the Ministry of Defence and the Ministry of Foreign Affairs, as these two ministries have their own archive services, the Service historique de la défense and the Archives diplomatiques respectively. The Archives nationales have one of the largest and most important archival collections in the world, a testimony to the very ancient nature of the French state which has been in existence for more than eleven centuries already.

The Archives nationales are under the authority of the French Archives Administration (Service interministériel des Archives de France) in the Ministry of Culture. The Archives of France also manage the 100 departmental archives located in the préfectures of each of the 100 départements of France, as well as various other local archives. These departmental and local archives contain all the archives from the decentralized branches of the French state, as well as all the archives of the pre-French Revolution provincial and local institutions seized by the revolutionaries (parlements, chartered cities, abbeys, churches, etc.). Thus, in addition to the 252 miles (406 km) of documents kept by the Archives nationales, at least 1,753 miles (2,821 km) of documents are kept in the departmental and local archives, in particular the church records and notarial records used by genealogists.

The five centres of the Archives nationales

Due to the massive volume of documents and records kept by the Archives nationales, these have been divided among four archives centres complemented by a microform centre serving as a back-up in case original documents are destroyed. The main centre is located in Le Marais in the heart of Paris, but a new centre is being built in Pierrefitte-sur-Seine, in the northern suburbs of Paris, and will become the main centre of the Archives nationales from 2012 on, the Paris premises keeping only pre-French Revolution records. 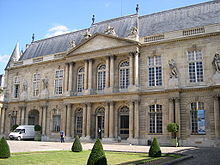 Façade of the Hôtel de Soubise

The Archives nationales has been located since 1808 in a group of buildings comprising the Hôtel de Soubise and the Hôtel de Rohan in the district of Le Marais in Paris. This centre stores all the documents and records from before 1958 (except the documents and records concerning former French colonies) as well as the archives of the French heads of state. Since 1867 it has also housed the Musée de l'Histoire de France.

The AN in Paris keeps 98.3 km. (61 miles) of documents (as of 2004): 15 km. are pre-French Revolution archives; 52 km. are archives of the French central state from 1790 to 1958; 20 km. are the so-called Minutier central, i.e. the archives of all the Parisian notaries extending from the 15th century to the beginning of the 20th century; 5.8 km. are private archives, notably the archives of the aristocratic families seized at the time of the French Revolution; 4.5 km. are books; and finally 1 km. are ancient maps and plans.

The oldest document kept at the AN is a papyrus dated AD 625 coming from the archives of the Abbey of Saint-Denis seized at the time of the French Revolution. This papyrus is the confirmation of a grant of land in the city of Paris to the Abbey of Saint-Denis issued by King Chlothar II. This document is the oldest original one kept by the Archives nationales, although the Archives nationales possess medieval copies of earlier records going as far back as AD 528 (but not the originals). 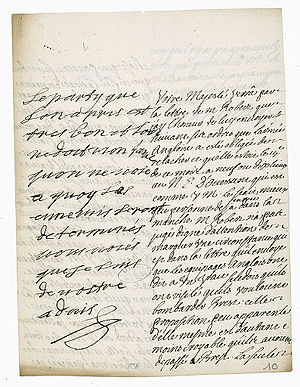 Handwriting of King Louis XIV kept at the AN. First page of a letter sent to Louis XIV on July 20, 1706 by Jérôme Phélypeaux, comte de Pontchartrain, Secretary of State of the Navy, in which he explains that an English fleet is approaching Ushant and may bomb Brest. In the left margin the 67-year-old king wrote a reply with his own hand: "Le party que l'on a pris est très bon et l'on ne doit rien faire qu'on ne voie à quoy les ennemis seront déterminés. Vous voiés que je suis de vostre advis. L" which means "The decision that was taken is very good and nothing must be done before making sure of the enemy's intentions. As you can see I agree with you. L".

The Cité interministérielle des archives, then Centre des archives contemporaines (CAC), French for "Centre for Contemporary Archives", opened in Fontainebleau in 1969. It is the repository for documents issued by the French central state since 1958 (founding of the Fifth Republic). It contains 193 km. (120 miles) of archives (as of 2006).

The Archives nationales d'outre-mer (ANOM), formerly Centre des archives d'outre-mer, French for "Centre for Overseas Archives", opened in Aix-en-Provence in 1966. It stores the archives from the ministries in charge of the French colonies and Algeria until the 1960s (such as the Ministry of Colonies) as well as the archives transferred from the French colonies and Algeria at the time of their independence between 1954-1962. The ANOM also possesses private and corporate archives related to the former French colonies and Algeria. In total the ANOM keeps 37 km. (23 miles) of archives from the 17th to the 20th century covering more than 40 currently independent countries spread over 5 continents. Note that the archives concerning Tunisia and Morocco, which were protectorates and not colonies, are kept by the Ministry of Foreign Affairs in its Archives diplomatiques.

1289 letter of Arghun to Philip the Fair, in the Uyghur script, with detail of the introduction. The letter was remitted to the French king by Buscarel of Gisolfe. The seal is that of the Great Khan, in Chinese characters: "Seal of the upholder of the State and the purveyor of peace to the People". The paper is of Korean manufacture. 182x25 cm. French National Archives.[2]

The construction of a new national archives centre at Pierrefitte-sur-Seine, in the northern suburbs of Paris, was decided in 2004. It is meant to become the main centre of the Archives nationales, with a capacity of 320 km. (200 miles) of shelves, one of the largest storage capacities in the world. This archives centre will store the archives of the French central state since 1790 (pre-French Revolution archives will remain in Paris).

The Pierrefitte-sur-Seine centre will receive from its opening 60 km. (37 miles) of records from the Paris centre and 120 km. (74 miles) from the Fontainebleau centre, which will alleviate the burden on both centres, and it will henceforth receive all the new records from the central state every year for the next 30 years after its opening. Designed by the Italian architect Massimiliano Fuksas, it is due to open in 2012 or 2013.

The Paris centre will remain the archives centre for pre-French Revolution archives as well as for Paris notarial records, whereas the Fontainebleau centre will keep 60 km. of contemporary serial archives.