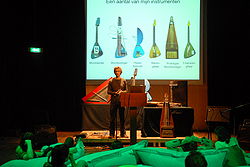 Yuri Landman (born February 1, 1973) is a Dutch experimental luthier[1] who has made several experimental electric string instruments for a list of artists including Lee Ranaldo of Sonic Youth,[2] Liars,[3] Jad Fair of Half Japanese and Liam Finn. He has also been active as a comic book creator, musician, and singer.

Yuri Landman started as a comic book artist and made his debut in the comics field in 1997 with 'Je Mag Alles Met Me Doen' (in Dutch). In the follow-up, released in 1998, 'Het Verdiende Loon', Landman described his negative experiences on a daily job.[4] For the second title he received the 1998 Breda Prize,[5] an award for rising new comic artists in Holland. Since then he has published no other comic books.

Together with Cees van Appeldoorn, he forms the lo-fi band Zoppo playing bass and prepared guitar in 1997.[6] After 2 albums and several 7”singles, Landman left the band in 2000. Landman then formed the noise band Avec Aisance (aka Avec-A) with drummer/producer Valentijn Höllander and released a CD, Vivre dans l’aisance in 2004. After quiting Avec-A in 2006, he focuses mainly on instrument building.

Landman is musically untrained and cannot play chords. While with Avec-A, Landman began creating and building several experimental string instruments, including electric zithers, electric Cymbalum, and electric Koto. Most of them are not regular instruments, but look more like multi-string crossbows and their sounds derive from string resonance, microtonality and overtoning spectra based on the no wave aesthetics of Glenn Branca and the microtonal consonant theory developed by Harry Partch.[7] 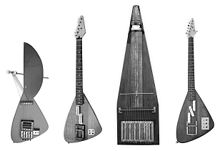 From November 2006 to January 2007 Landman finished 2 copies of The Moonlander, a biheaded electric 18 string drone guitar, one for Sonic Youth guitarist Lee Ranaldo and one for himself.[8]

The Springtime is an experimental electric guitar with seven strings and three outputs. The first prototype of this instrument created in 2008 was made for guitar player Laura-Mary Carter of Blood Red Shoes.[9] Afterwards he also made copies for Lou Barlow and dEUS' Mauro Pawlowski. For John Schmersal of Enon he built the Twister guitar, an alternate version of the Springtime.

Besides building instruments Landman also gave musicological lectures at venues, festivals and music related educational institutes about a theory based on physical laws. One of these lectures was given at the Primavera Sound Festival in 2008.[10] Landman published the essay 3rd Bridge Helix - From Experimental Punk to Ancient Chinese Music & the Universal Physical Laws of Consonance in which he clarifies the relation between this prepared guitar technique and the consonant values present in non-Western scales especially the musical scale used on the Ancient Chinese musical instrument the guqin.[11] He published an extensive 8 chapter guide how to prepare a guitar.

In 2009 he finished instruments for The Dodos, Liam Finn, HEALTH, Micachu and Finn Andrews of The Veils. For The Dodos and Finn electric 24 string drum guitars called the Tafelberg and for Andrews an electric 17 string harp guitar called the Burner guitar. He also starts to perform again after a Perpignan Festival hosted by Vincent Moon and Gaspar Claus. Meanwhile he continues on building instruments for artists such as These Are Powers, Women and Kate Nash and comes up with a second DIY-workshop for festivals for building an electric 12 tone Lamellophone. 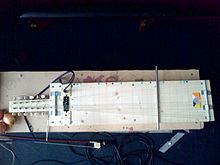 Around 2008 he started giving lectures and presentations with his instruments, leading to a request in 2009 for a practical building workshop. This became the rise of the Home Swinger project. A Gesamtkunstwerk consisting of a DIY-workshop where people built their copy of the instrument and often followed by a rehearsal and an ensemble performance with multiple Home Swingers, drums, basses, and guitars in the tradition of the Rhys Chatham and Glenn Branca compositions. After the rise of the Home Swinger project, other building workshops followed. Events mainly took place in Europe and in Februari 2010 in the US at the Knitting Factory[12] and Eyedrum.[13] The Home Swinger instrument was selected as one of the instruments for the second Guthman Musical Instrument Competition at the Georgia Tech, Atlanta, Feb 2010. Together with the Moodswinger this instrument is also included in the permanent collection of the Musical Instrument Museum in Phoenix AZ. Due to the ongoing tour schedule with the DIY-instrument projects, he discontinues the reproduction of his high end products for the bands, although he makes exceptions such as the development of a 42 string instrument for Peter James Taylor ad nine exclusive instruments for the Belgium composer Serge Verstockt in 2011. For his own musical carrier he built several instruments with motors, crossed strings and most notable the 25 meter long string instrument often featured at his ensemble performances. Because of his workshops he gets more connected to the experimental music scenery sharing stages with acts such as Jad Fair, Rhys Chatham, Wu Fei, Noël Akchoté, Action Beat, Dustin Wong (ex Ponytail) and others.

The Moodswinger was the first instrument Landman made for the band Liars.

The Springtime is an experimental electric guitar with seven strings and three outputs.

The Moonlander is a biheaded electric guitar with 18 strings: 6 normal strings and 12 sympathetic strings. Although it closely resembles an electric version of a harp guitar it is actually an electric sympathetic string guitar, because the droning strings are not meant to be plucked, but resonate on the played tones from the six normal strings.[8] The drone strings cross the plucked strings at an angle, and are attached to the machine head by a raised headstock.

Based on a biplane, Landman combined the theorbo with the electric guitar. The 12 droning strings create a natural reverb, with specific desired frequencies, depending on in which tones the strings are tuned. The standard tuning for the droning strings is a circle of fourths divided over two octaves.

Besides this acoustic reverb possibility the guitar is also a stereo guitar. The two rotated pickups individually send out different signals coming from different strings, to make it possible to play two different guitar parts on one instrument at the same time. The nut and bridge allow repositioning of the strings, modifying the Moonlander into a coursed instrument.

The Moonlander is visually a hybrid of the offset-waist body shaped lake placid blue Fender Electric XII with matching headstock and the Vox Mark VI. The name is derived from the 1979 computer game Moonlander aka Lunar Lander.

The guitar has four separate outputs:

Similar to the Liars' Moodswinger, two blue copies of this instrument have been made, one for Ranaldo and one for Landman himself. In the same year Landman finished another experimental instrument for Jad Fair of Half Japanese.