Marie de Médicis (26 April 1575 – 4 July 1642), Italian Maria de' Medici, was queen consort of France, as the second wife of King Henry IV of France, of the House of Bourbon. She herself was a member of the wealthy and powerful House of Medici. Following the assassination of her husband in 1610, which occurred the day after her coronation, she acted as regent for her son, King Louis XIII of France, until he came of age. She was famed for her ceaseless political intrigues at the court of France and extensive artistic patronage. 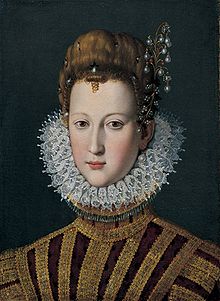 Portrait of Marie de Medici as a young girl, Adolescent or even pubescent Maria's head appears to pop out of her ruff like a fruit from a flower, her ruff was made of yards and yards of pleated fabric

Born in Florence, Italy, Marie was the daughter of Francesco I de' Medici, Grand Duke of Tuscany,[1] and Johanna, Archduchess of Austria. Her maternal grandparents were Ferdinand I, Holy Roman Emperor, and Anna of Bohemia and Hungary. She was one of seven children, but only she and her sister Eleonora de' Medici survived to adulthood.

Uncommonly beautiful in her youth, she married Henry IV of France in October 1600 following the annulment of his marriage to Margaret of Valois. The proxy wedding ceremony in Florence was celebrated with lavish entertainments, including examples of the newly-invented musical genre of opera. She brought as part of her dowry 600,000 crowns. Her eldest son, the future King Louis XIII, was born at Fontainebleau the following year.

The marriage was not a successful one. The queen feuded with Henry's mistresses in language that shocked French courtiers. She quarrelled mostly with her husband's leading mistress, Catherine Henriette de Balzac d'Entragues, whom he had promised he would marry following the death of his former "official mistress", Gabrielle d'Estrées.[2] When he failed to do so, and instead married Marie, the result was constant bickering and political intrigues behind the scenes. Although the king could have easily banished his mistress, supporting his queen, he never did so. She, in turn, showed great sympathy and support to her husband's banished ex-wife Margaret of Valois, prompting Henry to allow her back into the realm.

Marie was crowned Queen of France on 13 May 1610, a day before her husband's death. Hours after Henry's assassination, she was confirmed as regent by the Parlement of Paris. She immediately banished his mistress Catherine Henriette de Balzac d'Entragues from the court.

The construction and furnishing of the Palais du Luxembourg, which she referred to as her "Palais Médicis", formed her major artistic project during her regency. The site was purchased in 1612 and construction began in 1615, to designs of Salomon de Brosse. Her court painter was Peter Paul Rubens.

During her husband's lifetime Marie showed little sign of political acumen, and her abilities scarcely improved after she assumed the regency. Extremely stubborn and of limited intelligence, she was soon entirely under the influence of her maid Leonora "Galigai" Dori. Dori conspired with her unscrupulous Italian husband, Concino Concini, who was created Marquis d'Ancre and a Marshal of France, even though he had never fought a battle.

The Concinis had Henry IV's able minister, the Duke of Sully, dismissed, and Italian representatives of the Roman Catholic Church hoped to force the suppression of Protestantism in France by means of their influence. Half Habsburg herself, Marie abandoned the traditional anti-Habsburg French foreign policy. She lent support to Habsburg Spain by arranging the marriage of her daughter Elisabeth to the future Philip IV of Spain.

Under the regent's lax and capricious rule, the princes of the blood and the great nobles of the kingdom revolted. The queen, too weak to assert her authority, consented to buy them off on 15 May 1614. The opposition to the regency was led by Henri de Bourbon, Duke of Enghien, who pressured Marie into convoking the Estates General in 1614 and 1615, the last time they would meet in France until the opening events of the French Revolution.

In 1616 Marie's rule was strengthened by the addition to her councils of Armand Jean du Plessis (later Cardinal Richelieu), who had come to prominence at the meetings of the Estates General. However, her son Louis XIII, already several years into his legal majority, asserted his authority the next year. The king overturned the pro-Habsburg, pro-Spanish foreign policy pursued by his mother, ordered the assassination of Concini, exiled the queen to the Château de Blois and appointed Richelieu to his bishopric.

After two years of virtual imprisonment "in the wilderness", as she put it, Marie escaped from Blois in the night of 21/22 February 1619 and became the figurehead of a new aristocratic revolt headed by Louis's brother Gaston d'Orleans, which Louis's forces easily dispersed. Through the mediation of Richelieu the king was reconciled with his mother, who was allowed to hold a small court at Angers. She resumed her place in the royal council in 1621. 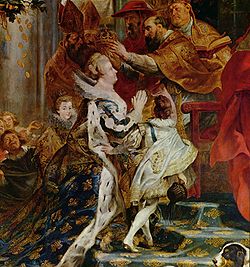 The portrait by Rubens (above right) was painted at this time. Marie rebuilt the Luxembourg Palace (Palais du Luxembourg) in Paris, with an extravagantly flattering cycle of paintings by Rubens as part of the luxurious decor, called The Marie de' Medici Cycle (detail from one painting on left).

After the death of his favourite, the duke of Luynes, Louis turned increasingly for guidance to Richelieu. Marie de Medici's attempts to displace Richelieu ultimately led to her attempted coup; for a single day, the "Day of the Dupes", in November 1630, she seemed to have succeeded; but the triumph of Richelieu was followed by her exile to Compiègne in 1630, from where she escaped to Brussels in 1631 and Amsterdam in 1638.

Her visit to Amsterdam was considered a diplomatic triumph by the Dutch, as her visit lent official recognition to the newly-formed Dutch Republic; accordingly she was accorded an elaborate ceremonial royal entry, of the sort the Republic avoided for its own rulers. Spectacular displays (by Claes Corneliszoon Moeyaert) and water pageants took place in the city’s harbor in celebration of her visit. There was a procession led by two mounted trumpeters, and a large temporary structure erected on an artificial island in the Amstel River was built especially for the festival. The structure was designed to display a series of dramatic tableaux in tribute to her once she set foot on the floating island and entered its pavilion. Afterwards she was offered an Indonesian rice table by the burgomaster Albert Burgh. He also sold her a famous rosary, captured in Brazil. The visit prompted Caspar Barlaeus to write his Medicea hospes ("The Medicean Guest") (1638).

Marie subsequently travelled to Cologne, where she died in 1642, scheming against Richelieu to the end.

"Marie de' Medici, all of whose actions were prejudicial to France, has escaped the shame which ought to cover her name. Marie de' Medici wasted the wealth amassed by Henry IV; she never purged herself of the charge of having known of the king's assassination; her intimate was d'Épernon, who did not ward off Ravaillac's blow, and who was proved to have known the murderer personally for a long time. Marie's conduct was such that she forced her son to banish her from France, where she was encouraging her other son, Gaston, to rebel; and the victory Richelieu at last won over her (on the Day of the Dupes) was due solely to the discovery the cardinal made, and imparted to Louis XIII, of secret documents relating to the death of Henry IV." – Essay Catherine de Medicis. 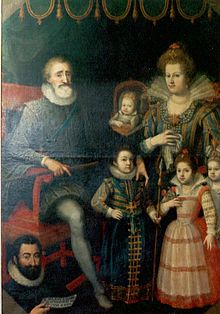 Marie de Medici and her family

See also Descendants of Marie de' Medici which maps how the Medici became part of the European Royal families.