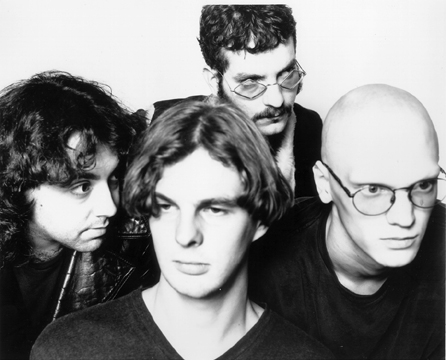 Tadpoles are a band formed in 1990 in by Todd Parker (guitars/vocals) and Michael Kite Audino (drums.) In 1992, Nick Kramer (guitars/vocals), David Max (bass) and Andrew Jackson (guitars) of the fledgling Manhattan group, Hit, joined the Tadpoles after putting Hit on hiatus.

In 1993 Kite and Jackson left the group, which relocated to , where Parker formed Bakery Records. In 1996, Adam Boyette (drums) joined Tadpoles to complete what would be their final line-up. Parker announced the Tadpoles would be going on an “indefinite hiatus” in 2000, and the group disbanded. Kramer, Max and Boyette reformed Hit and continued on.

Todd Parker originally formed the group while living in in 1985 as an outlet for mostly solo 4-track recordings. These recordings were released on the cassettes, "Ham & Eggs" (1987); "Limousines, Sardines, Dinosaurs" (1988); "Beautiful Music For Ugly Children" (1989); and "William’s Doll" (1990). (NYU) filmmaker, Michael Kite Audino became increasingly more involved in the recordings, so Parker and Kite decided to form a live version of the Tadpoles in New York City in 1990. They released one more cassette album "Ride The Soul" (1991) which featured their initial NYC recordings.

While Parker’s previous recordings were all over the musical map, the new group focused on their influences, combining Kite’s films , a homemade light show, and an excessively loud sound volume to create a multi-sensory live experience…akin to what the , , , and the were doing at the time. Tadpoles became fixtures on the Manhattan rock club scene in 1992-1993 after NYU students, Nick Kramer, David Max and Andrew Jackson, joined the group.

In 1992, the band recorded a 10 song , "Superwhip", and began a relationship with producer/ Records owner, , who offered to record the group at his Noise New Jersey Studio, where in 1993, Tadpoles recorded their debut album, "He Fell Into The Sky". However, internal issues led to the departure of both Kite and Jackson before the album was released, and the group stalled temporarily.

In 1994, Parker formed "Bakery Records" to release "He Fell Into The Sky", an album of short, powerful, psychedelic pop-rock songs; and, it received very positive reviews... although, the band still had a difficult time finding their audience in the Manhattan clubs. Tadpoles continued to record new material with Kramer at Noise New Jersey with guest drummers, "Steve Savoca" (The Werefrogs) and "Edward Odowd" ( [Toilet Boys / Psychic TV) and with Nick Kramer taking a bigger role in song-writing and guitar-playing. "Jeff Passifiume" (The Lost Continentals/Hank McCoy and The Dead Ringers) added tasty, soaring lap steel to the mix. In the fall of 1994, Tadpoles were showcased in the (CMJ) music marathon at Manhattan's Batcave club.

In 1996, Tadpoles’ second album, "Far Out", again produced by Shimmy Disc’s Kramer, was released on Bakery Records and was extremely well-received, both nationally and internationally, by the alternative music press. Far Out also garnered an unexpected and uncommon (for a self-released band) 4-star review from by writer . With a smoother, spacier sound, Far Out gained Tadpoles a national fan base due to enthusiastic airplay on college radio. This led to the group being picked up by larger distributors so that their albums were able to reach a wider audience. The group, which rarely played live, added "Adam Boyette" as their permanent drummer and began writing and recording their next album.

In 1997, Tadpoles performed a well-received set at the first "Terrastock" Festival held in . The performance gained them new fans and was released in 1998 as "Destroy Terrastock – Live", with both the album cover and title being derived from a Bootleg “Destroys Anaheim.” In the fall of 1997, Tadpoles toured the US west coast along with fellow Terrastock veterans, and , and played a show in with the legendary John Fahey.

Coinciding with the tour, Tadpoles released an EP, "Know Your Ghosts", which contained a track from the upcoming new studio album, along with a few other unreleased songs, one of which was a cover of the Tony Mentzer track, “Oops, I Lost Your Mind.” “Oops, I Lost Your Mind” featured Tony Mentzer on vocals, along with Chris Butler (/Tin Huey) on drums.

In 1998, Tadpoles released their third Bakery Records studio album, "Smoke Ghost", which was once again produced by Kramer (Shimmy Disc/) at Noise New Jersey. The album, richly layered, thick, lush , was again well received by press; but, by this point, Tadpoles had essentially eschewed live performance, with little intention of venturing outside their Hoboken rehearsal studio except for a rare local club appearance. Smoke Ghost featured a significant song-writing contribution from Nick Kramer, who wrote half the material.

Tadpoles recorded their final studio album, "Whirlaway", (producing themselves this time,) at Ampreon Recorder in . Engineer Pete Drivere captured the live feel of the expansive set of songs; and, the result was the first Tadpoles album released on a label other than Bakery Records. Australia’s Camera Obscura Records released Whirlaway in 1999, again garnering rave reviews and new fans for the group. Whirlaway's long instrumental closing track, "Horse and Buggy", was recorded at Manhattan's by their long-time producer, Kramer; and, Tadpoles mixed an entire version of the album with Gene Holder (), although only a few of these mixes were used. (Drivere's mix was preferred by the band.)

Sharing the bill with and , Tadpoles gave their final performance in February of 2000 at a sold-out show at in Hoboken, which was the first time they ever played their legendary hometown club. Later in 2000, Todd Parker announced that the group was going on an “indefinite hiatus” and they disbanded.

In 2001, Bakery Records released "Use With Headphones Late At Night- Best of 1990-2000", a remastered compilation featuring tracks from each studio album, along with alternate mixes.

Since the Tadpoles disbanded, David Max, Nick Kramer and Adam Boyette, reformed Hit and released the vinyl EP "Quosibility" and continue to record at their recording studio. David Max also joined seminal psychedelic electronic noise group, (PTV3) along with Edward Odowd (who played drums on a few tracks of Tadpoles’ Far Out album.) Max and Kramer recorded the most recent PTV3 album, "''" at their studio. The album features David Max on guitars and was released in 2007. Also, in 2007, Nick Kramer, along with Alex Kress, released an album of duets/covers, "Nicholas & Alexandra."