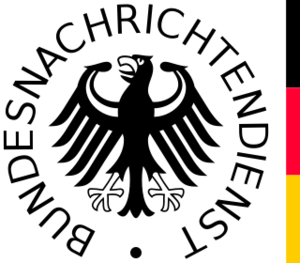 
seal_width =
seal_caption =
formed = ,
preceding1 = Gehlen Organization
dissolved =
superseding =
jurisdiction =
headquarters = and
employees = 6,050 (2005)
budget =
minister1_name =
minister1_pfo = Federal Minister of Special Affairs
chief1_name =
chief1_position = President
chief2_name = Arndt von Freytag-Loringhoven
chief2_position = Vice-President
parent_agency =
child1_agency =
child2_agency =
website = [http://www.bnd.bund.de www.bnd.bund.de]
footnotes =The Bundesnachrichtendienst ("Federal Intelligence Service", BND) is the foreign of the German government, under the control of the Chancellor's Office. Its headquarters are in near , and (planned to be centralised in Berlin by 2011). The BND has 300 locations in Germany and foreign countries. In 2005, the BND employed around 6,050 people, 10% of them soldiers; those are officially employed by the "Amt für Militärkunde" ("Office for Military Sciences"). The annual budget of the BND exceeds € 430,000,000.

The BND acts as an early warning system to alert the German government to threats to German interests from abroad. It depends heavily on wiretapping and electronic surveillance of international communications. It collects and evaluates information on a variety of areas such as international terrorism, WMD proliferation and illegal transfer of technology, organized crime, weapons and drug trafficking, money laundering, illegal migration and information warfare. As Germany’s only overseas intelligence service, the BND gathers both military and civil intelligence. However, the "Kommando Strategische Aufklärung" (Strategic Reconnaissance Commando) of the German Armed Forces also fulfils this mission, but is not an intelligence service. There is close cooperation between the BND and the Kommando Strategische Aufklärung.

The domestic counterparts of the BND are the "" (Federal Office for the Protection of the Constitution, BfV) and 16 counterparts at the federal state level "Landesämter für Verfassungsschutz" or State Offices for the Protection of the Constitution); there is also a separate military intelligence organisation, the "" (lit. military screening service, MAD).

The predecessor of the BND is the German eastern military intelligence agency, "" in the General Staff, led by General . Its main purpose was to collect information on the Soviet Union. In 1946 Gehlen set up an intelligence agency informally known as the Gehlen Organization, and recruited many of his former co-workers. Many also were recruited from the former , and . The organisation mainly worked for the CIA, which contributed money and other materials. On the Bundesnachrichtendienst was created from the Gehlen Organization, and was transferred to the German government. Reinhard Gehlen remained President of the BND until 1968.

In 2005 a public scandal erupted (dubbed the "Journalistenskandal", Journalists scandal) over revelations that the BND had in the mid 1990s placed under surveillance a number of German s, in an attempt to discover the source of information leaks from the BND.

Yet another scandal came to light in early 2006, when it was revealed that agents of the BND allegedly supplied targeting information to U.S. forces to facilitate the invasion of Iraq in 2003. The BND assures that it only conveyed so-called non-targets, locations that must not be attacked.

The former is one where the BND has (partially) admitted to using journalists to spy on fellow journalists. This supposedly was done, to protect the security and authenticity (i.e. the truth) of the BND's investigations. It was quickly decided to set up a parliamentary investigation committee ("Parlamentarischer Untersuchungsausschuss"), to investigate the allegations. The affair quickly became heated, if the allegations are substantiated, it would be tantamount to a violation of which is protected under the German constitution.

The Bundesnachrichtendienst is divided into 8 branches, with different operational intelligence tasks.

Presidents of the BND

The head of the Bundesnachrichtendienst is its . The following persons have held this office since 1956:

The President of the BND is a federal paid according to BBesO order B, B6 (can be viewed [http://www.bmi.bund.de/cln_012/nn_122688/Internet/Content/Themen/Oeffentlicher__Dienst/Einzelseiten/Besoldung/Besoldungstabellen__West__Id__94650__de.html here] )