Royal Marines Base Chivenor (ICAO: EGDC) is a British military base used primarily by the Royal Marines. It is situated on the northern shore of the Taw estuary, adjacent to the South West Coast Path, on the north coast of Devon, England.

Originally a civil airfield opened in the 1930s, the site was taken over by the Royal Air Force in May 1940 for use as a Coastal Command Station, and was known as RAF Chivenor. After World War II, the station was largely used for training, particularly weapons training. During the 1960s, one of the RAF's Tactical Weapons Units (TWU) used Hawker Hunter aircraft for training. In 1974 the station was left on "care and maintenance", though No. 624 Volunteer Gliding Squadron continued to fly from there. The TWU returned, flying BAE Hawks, in 1979 and 1981. In 1994, the TWU left Chivenor, merging with No. 4 Flying Training School at RAF Valley, and the airfield was handed over to the Royal Marines. The Marines have an existing equipment testing base at Arromanches Camp, in Instow, located across the Taw Estuary and approximately two miles from Chivenor.

The RAF still has the "A" flight of 22 Squadron with two search and rescue Sea King helicopters stationed there, and No. 624 Volunteer Gliding Squadron operating Vigilant T1 motor gliders.

In a spending review that was announced over the summer of 2004, the presence of 22 Squadron at Chivenor was under review. After the flooding at Boscastle, this threat was rescinded.

The beginning of RAF Chivenor

In February 1940 the Air Ministry constructed an aerodrome on the site of Chivenor farm near a civilian airfield. RAF Chivenor opened on 25 October 1940 within No. 17 Group, Coastal Command. There were two units based there initially, No. 3 (Coastal) Operational Training Unit and No. 252 Squadron, both operating Bristol Beaufighters, Bristol Blenheims and Bristol Beauforts.

From 1942 onward the role of Chivenor was changed from training to anti-submarine patrolling. From 1942 to 1943 the squadron flew the Armstrong Whitworth Whitley, then in 1943 the Chivenor squadron converted the Vickers Wellington equipped with the ASV radar and Leigh lights.

In November 1941 the structure of the base changed with three new squadrons 51, 77 and 502 flying a mixture of Whitleys and Wellingtons, and one new flight, 1417, that was used to training crews on the Leigh light and radar Wellingtons. In July 1942 three squadrons of Beaufighter were located at Chivenor to offer long range protection in the Bay of Biscay. By September 1943 all of the Whitleys had been take out of active service at Chivenor, and four squadrons of Wellingtons, 172, 407, 612 and 304, were located at the base. No 172 was the Wellington Training Squadron, taking over from 1417 Flight. The base had personnel from Canada, Poland and the UK. The Plan for the post war, was for Chivenor to become a full time anti-submarine wing with two squadron's 14 and 36 Squadron.

After the Second World War ended, the future of the station was not certain. In 1946 a group of miscellaneous meteorological and anti-aircraft units moved to Chivenor, including Halifaxes of Nos 517 and 521 Squadrons which flew 10-hour sorties to collect weather information. At the same time the station played host to No 248 Squadron (Mosquitos), No 254 Squadron (Beaufighters), and the Spitfires and Martinets of No 691 Squadron, Army Air Corps. In October 1946, No. 11 Group RAF Fighter Command took command of the station with No.203 Advanced Flying School. This lasted until July 1949 when the station was transferred to 5 and 7 Squadrons, Army Air Corps and No 1 Overseas Ferry Unit. This latter unit had the duties to ferry Meteors, Vampires and Mosquitoes to the Middle East and the Far East.

In February 1950 the Chivenor station flight was formed with Tiger Moths. It was at this time that post-war civilian flying restarted, with Wrafton flying club later changing its name to the Puffin flying club. At this time the RAF was operating as No. 229 Operational Conversion Unit which flew Vampires and Meteors. Then in mid 1955 the first of the Hunter operational conversion courses was started: flying was still mainly on the Vampire FB5 with approximately 20 hrs on the Hunter F1 before pilots were sent to their operational squadrons. During the next 2 years the Vampires were phased out and the course became all Hunter once the Hunter T7, a two-seater trainer version, became available. There were 2 squadrons called simply 1 and 2, each capable of training a student from conversion to operational and weaponry training.

In May 1957 the RAF exercise 'Vigilant' changed Chivenor's Squadrons' status. They assumed a wartime reserve role and were renumbered as Nos 145 and 234 Squadrons. The squadrons were now flying the Hunter F4 and T7 until the F4 was replaced by the F6. The two squadrons were numbered and then renumbered until they became 63(Reserve) and 79(Reserve) Squadrons training fighter pilots. In March 1967 the oil tanker Torrey Canyon ran aground on Seven Stones Reef near Lands End, leaking oil. For three days, Hunters from Chivenor and other bases fired training rockets at the ship to hole it below the waterline, before bombing it with high explosive and napalm in an unsuccessful effort to burn off the oil. [2] The final Hunter unit based at Chivenor was the Singapore Operational Training Flight. In 1972, 229 OCU was transferred to RAF Brawdy and the station was put into a rebuilding programme. It was in June 1957 that a new chapter in Chivenor's story started with the arrival of 'E' Flight 275 Squadron with their Sycamore HR14s on search and rescue duties. In 1958 'E' Flight changed to 'A' Flight 22 Squadron, which now has 50 years of twenty-four hour search and rescue experience operating from Chivenor.

In 1979 the RAF rebuilding programme ended and the station was reactivated as No. 2 TWU flying BAe Hawks with Nos 63(R) and 151(R) Squadrons training fast jet pilots and navigators. In 1992, the government's options for change defence review resulted in the structure of the station changing with 2 TWU being re-designated as 7 Flying Training School. The squadrons also changed their numbers from 63(R) and 151(R) to 19(R) and 92(R). 7 Flying Training School operated in conjunction with 4 Flying Training School at RAF Valley. This training course was called the Mirror Image Training Course which lasted for three years until 1995 when the MOD announced that RAF Chivenor would close. For a time the future of the base was not assured but the Royal Marines filled the gap. RAF Chivenor closed on 1 October 1995.

A new beginning as RMB Chivenor

From the 1st October 1995 onwards, the Royal Marines took control of the base, it being renamed Royal Marines Base Chivenor (RMB Chivenor) and is home to the Commando Logistics Regiment, Royal Marines and 24 Commando Regiment Royal Engineers.

The airfield is still an operational airfield used by the Royal Navy, Royal Marines and RAF. Search and rescue duties are undertaken by a detachment of 22 Squadron RAF[3] and by 624 Volunteer Gliding Squadron which operates Vigilant T1 motor gliders, providing flights for the Air Training Corps and Combined Cadet Force.[4] The airfield is also used for training by many aircraft types including Merlins, Sea Kings, Pumas, Chinooks, Lynx, Hercules C- 130, C17 Globemasters and Hawks[citation needed]. There are regular flights by Hercules, C17 and many helicopters supporting the Marines' operations.

The Commando Logistic Regiment's role is to ensure the re-supply of ammunition, water, fuel and food, known as "combat supplies" to the ground forces, and provide specialist services to sustain the brigade's operation

Formed in April 2008, 24 Commando Engineer Regiment is a unit of the British Army's Royal Engineers which supports 3 Commando Brigade Royal Marines. Expeditionary in nature, this elite fighting force is optimised as an Amphibious formation, with the unique ability to rapidly deploy around the World and project force without reliance on ports or airfields.

At RMB Chivenor new state-of-the-art Mechanical Transport and Armoury facilities have been built. This facility is a joint unit with Royal Navy and Royal Marine technicians working along side Babcock Marine technicians. The facility's main job is to support the Royal Marine fleet of vehicles like the Jackal and the Viking. Another task that the facility is used for is the testing of the Jackal, the Jackal is built in Devonport before being taken to Chivenor to be tested on nearby ranges. Finally the facility acts as a recovery centre. When vehicles are damaged in areas like Afghanistan they are loaded onto transport aircraft straight to Chivenor for repair in the Mechanical Transport and Armoury Facility. 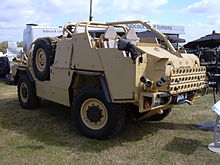 Arromanches Camp is located at Instow 3 miles as the crow flies from Chivenor across the River Taw. Although 11 Amphibious Test and Trials Squadron based at this camp is part of 1 Assault Group Royal Marines from Poole it is an administered by the RMB Chivenor Base Support Regiment that provides messing and support facilities from Chivenor.

The name of the camp comes from the name of the town on Gold Beach of the Normandy landing from the Second World War. The village of Instow is twinned with Arromanches.

When Peter Carter is washed ashore in A Matter of Life and Death, the filming location was Saunton Sands, the seaward (westward) portion of Braunton Burrows dune system. As he talks to the shepherd boy, the De Havilland Mosquito that flies over him almost certainly has just taken off from RAF Chivenor, which borders the dune system to the east.

On 23 March 2007, 15 British Royal Navy personnel, from HMS Cornwall (F99), were detained by the Navy of the Iranian Revolutionary Guards. The 15 personnel were released on 4 April 2007, then they were take to Chivenor where they reunited with their families and gave press interviews.

On the 21 November 2008 the BBC Top Gear (current format) series filmed segments near to Chivenor. In the segments the presenter Jeremy Clarkson takes part in a mock battle on the beach at Instow with around 30 marines from Chivenor and elsewhere.

The Sea King from 22 squadron A-Flight at Chivenor took a starring role in the National Geographic Channel documentary television series Sea Patrol UK, with B-Flight of 22 Squadron at AAC Wattisham along side Royal Navy and Coastguard units.