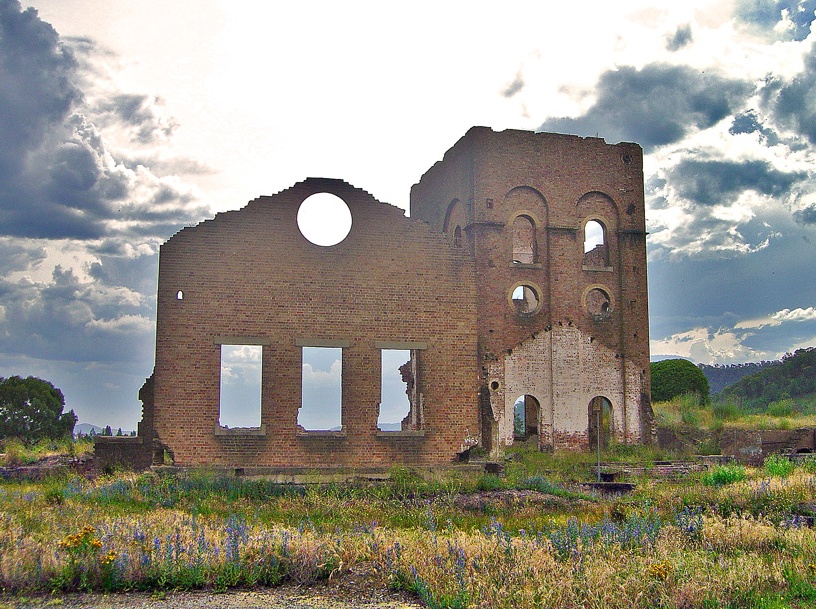 Lithgow is situated in , and is the centre of the local political division . It is located in a mountain valley named Lithgow's Valley by in honour of William Lithgow, the first Auditor-General of New South Wales. Lithgow is located on the , about convert|150|km|mi|0|abbr=on or two hours drive west of Sydney, [Robinson's Road Atlas of Australia, Edition 8 (Lansdowne Press) 1983, Map 204] or via the old mountain route, , from Windsor.

Lithgow is surrounded by a varied landscape which includes national parks, one of which, the , is a World Heritage Area. The is home to the Jurassic-age tree the Wollemi Pine, which was found growing in a remote canyon in the park.

The city sits on the western edge of the sandstone country of the Blue Mountains and is usually considered the first true country town west of . Immediate surrounding areas include the old mining hamlet of Vale of Clywydd and Oakey Park, a famous iron and steel village, of which fiery night scenes have been depicted in many paintings, as well as large areas of bush and state forest. The next city to the West is Bathurst, convert|60|km|mi|0|abbr=on away.

Lithgow is in the NSW State electorate of Bathurst, while federally it is part of electorate of Macquarie. Lithgow benefits from being the western terminus for the electric section of the Main Western railway line from , and of CityRail's intercity Blue Mountains railway line. Lithgow is a major location on the iconic zig-zag railway.

The mountainous terrain of the Blue Mountains and the expense of building long tunnels required the construction of the between 1866 and 1869. The line was opened as far as Bowenfels, just to the west, in 1869, but Lithgow station was not opened until 1877. Although it was superseded in 1910 by more modern methods, including ten tunnels, the Zig Zag remains a popular tourist attraction. [cite web
publisher = www.nswrail.net
title=Main Western Line
url = http://www.nswrail.net/lines/show.php?name=NSW:main_west
accessdate = 2006-11-29 ]

The town is the centre of a mining district and there are two coal-powered power stations nearby. It is the site of Australia's first commercially-viable , ["An Episode in our Troubled Steel Industry" Grunbach, A. Australian Railway Historical Society Bulletin, September, 2000 pp323-331] the ruins of which are open for inspection at "Blast Furnace Park".

Due to the abundance of coal and relative proximity to , Lithgow is the site of one of the largest power stations in NSW, the Mount Piper and Wallerawang Power Station. It is operated by .

Lithgow is adjacent to a number of national parks and other attractions. Places to visit include the Zig Zag Railway, Glow Worm Tunnel, Secret Creek Sanctuary, in the and in the , the second largest canyon in the world.

Other places include the Hartley Historic Site, Small Arms Factory Museum, State Mine Heritage Park and the Eskbank House Museum. Lithgow is also close to the Jenolan Caves, which are a World Heritage Area and lie to the south of Lithgow.

By far the biggest, in terms of visitors, tourist attraction in Lithgow is Ironfest, an annual cultural heritage event that attracts over 10,000 visitors a year.Ironfest hosts the annual St George's Day Jousting Tournament which involves contestants from all around the World.Another major part of Ironfest is the colonial battle re-enactment, called the 'Battle of Lithgow' which involves over 120 participants, kitted out in fully authentic 19th century apparel, and involving cavalry, infantry and artillery.As well as these two major historical re-enactment events Ironfest comprises historical & auto displays, blacksmith demonstrations, art exhibitions, live music and performance, art making workshops & demonstrations, and much more. (For more info visit www.ironfest.com.au

The iron and steel industry at Lithgow

In 1848, began in , Australia. It proved unprofitable for the remainder of the 19th century. This situation remained until the early 20th century when no was being smelted. The only iron being cast was by William Sandford in Lithgow. His works were bought by G.&C. Hoskins in 1907, who had previously been making iron pipes in Sydney. The Lithgow works acquired a reputation for industrial disputes.

*Andrew Brown, first European settler of the Lithgow Valley as well as prominent industrialist and philanthropist. Ran a large agricultural property in Lithgow, built the first mill in the region and was the first individual to exploit Lithgow's vast coal reserves. He also built a number of Presbyterian churches and schools in the region as well as founding the St Andrew's College at the [http://www.lithgow-tourism.com/abrown.htm] .

*, Olympic Gold Medalist and Governor of , was brought up in Lithgow and at the peak of her athletic career was famously known as "The Lithgow Flash".

*, the former Australian Test Fullback, was born in Lithgow.

*The town has also been made famous by the comedy/current affairs team of . "Roy" -- otherwise known as John Doyle -- was born in Lithgow and tells frequent stories of when he played for the Football Club, the Lithgow Shamrocks, under coach Grassy Grannell. The Shamrocks were a junior and senior rugby league team until the mid-1990s, when the juniors merged with another local junior league side, the Lithgow Workmen's Club, to form the Lithgow Storm. The Lithgow Workmen's Club Rugby League Football Club (the "Wolves") is Lithgow's only extant rugby league side at senior level.