Foster's Home for Imaginary Friends is an American animated television series created and produced at Cartoon Network Studios[1] by animator Craig McCracken, creator of The Powerpuff Girls. It first premiered on Cartoon Network on August 13, 2004, as a 90-minute television movie, which led to a series of half-hour episodes. The series aired on Cartoon Network and its affiliates worldwide, except in Canada where it has aired on English and Francophone Teletoon networks due to Canadian television ownership regulations. The show finished its run on May 3, 2009 with a total of 79 episodes.

In the Foster's universe, imaginary friends take physical form and become real as soon as children think them up. Once the children outgrow them, the friends move to Foster's Home for Imaginary Friends, where they stay until other children come to adopt them. The home is run by the elderly Madame Foster, its founder; her friend Mr. Herriman, the business manager; and her granddaughter Frankie, who handles day-to-day operations.

Mac is an eight-year-old boy, whom his mother told that he needs to give up his friend Bloo, who hears about Foster's and thinks it will be a perfect place for him to stay. Bloo moves in with the lanky and one-armed Wilt, the scary-looking but cowardly Eduardo, and the bizarre bird/airplane/tree friend Coco. He is saddened to learn that staying at Foster's makes him eligible for adoption by another child, but eventually Madame Foster makes a special deal: as long as Mac visits every day, Bloo can live there and not be adopted. 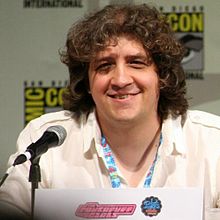 In the Foster's Home for Imaginary Friends universe, imaginary friends (or "friends" for short) become physical beings the instant a child imagines them; unlike how the concept often works on other shows, an imaginary friend takes physical and emotional form after a child creates specific details about that character. Unfortunately for them, the children eventually outgrow them around ages 7–8. When this happens, the friends are left to fend for themselves. Foster's Home for Imaginary Friends was founded by the elderly Madame Foster to provide a foster home for abandoned imaginary friends.

There are (according to "Setting a President") 1,340 imaginary friends in Foster's Home; however, at the end of "Emancipation Complication", Madame Foster states that there are 2,038 imaginary friends currently residing in the house, plus Bloo and Mr. Herriman.[2] The house motto is "Where good ideas are not forgotten".

The inspiration came when McCracken and his wife, Lauren Faust, adopted a pair of dogs from an adoption shelter. McCracken wondered how things would be if there was a similar place for childhood imaginary friends.

The show spanned 79 episodes and six seasons; it has also aired 18 shorts.

Foster's Home for Imaginary Friends was named the 85th best animated series by IGN, which called it very funny and endearing.[3] Mike Pinsky, in a review on DVD Verdict, praised the art design and the characterizations,[4] particularly singling out Cheese as possibly “the quintessence of Foster's surreal charm" in his season two review.[5]

The show was nominated for four Annie Awards in 2004,[6] and 5 more in 2005, winning two awards that year for Best Original Music in a Television Series (James L. Venable and Jennifer Kes Remington for "Duchess of Wails") and Production Design in an Animated TV Series (McCracken with Mike Moon, David Dunnet and Martin Ansolabehere for the Christmas episode "A Lost Claus").[7] Five more nominations came in 2006, with three wins as Best Animated Television Production, Best Original Music in a TV Series (Venable and Remington winning again for "One False Movie") and Production Design in a TV Series (Ansolabehere by himself for the one-hour "Good Wilt Hunting" episode).[8] Venable and Remington teamed up for the show's lone Annie nominee in 2007, for their original music in a TV series for "The Bloo Superdude and the Magic Potato of Power".[9] The show was able to garner 2 more nominations in 2009 for the categories Character Design in a Television Production and Production Design in a Television Production with the nominees being Janice Kubo and Ben Balistreri respectively.

The show has won a total of seven Emmy Awards. The episode "House of Bloo's" won two Emmy Awards for art direction (Mike Moon) and character design (Craig McCracken). "World Wide Wabbit" won an Emmy for best storyboard (Ed Baker). The show's theme song (described by McCracken as "psychedelic ragtime" and written by Venable) was nominated for Best TV Show Theme in 2005, but lost to Danny Elfman's theme to Desperate Housewives. The episode "Go Goo Go" was nominated for Best Animated Program Under One Hour in 2006, and Character Design supervisor Shannon Tindle won an Emmy that same year for that same episode. The 2006 episode "Good Wilt Hunting" was nominated in 2007 for Best Animated Program One Hour or Longer, but lost to the Camp Lazlo TV movie "Where's Lazlo?". However, David Dunnet won an Emmy for his background key design for said episode. The 2008 television movie "Destination Imagination" won another Emmy in 2009 for Best Animated Program One Hour or Longer.

Other than in-house items such as Cartoon Network's internet shop (T-Shirts, a Bloo plush, etc.), there has not been much as far as major products. As of 2006, there has been a statue series with Bloo, Mac, and Eduardo featured in the first statue. A second statue features Frankie, Madame Foster, and Mr. Herriman released in December 2006, and the third in the series featuring Wilt and Coco was released in January 2007. Two limited edition inkjet (giclée) cels — one with the cast posing for a picture, the other styled like a cross-stitch — were also created. Since then, the merchandising has begun to pick up steam. DVD season boxsets have been released with seasons one and two being released in Region 1 and Region 4 during 2007 by Warner Home Video and Madman Entertainment. About three years later, Season three was released in Region 4 in May 2010. Seasons four, five, and six have not been released on DVD yet, however all seasons have been released on iTunes and the PlayStation network in the US.

Scholastic Books has printed game and story books based on episodes as well as a Game Boy Advance game created by CRAVE Entertainment made its debut in the Fall of 2006. Called Foster's Home for Imaginary Friends, the player controls Mac or Bloo while collecting items to complete objectives. Another game for Nintendo DS debuted in November 2007 titled "Foster's Home for Imaginary Friends: Imagination Invaders". It is based on the episode "Make Believe It or Not" where Goo imagines the Evil Space Nut-Boogies. The player controls Bloo using the buttons on the Nintendo DS console. The main objective of the game is to rescue Madame Foster who has been kidnapped by Space Nut Boogies. To do this the player must earn the cooperation of different characters from the television series by performing tasks for them in order to gain their help. Both games have received generally less than satisfactory reviews.

Since January 2007, as part of an overall deal with Cartoon Network, Mattel has released items related to the mass marketing of the show. Additionally, T-shirts and other merchandise featuring the characters made by clothing line Mighty Fine and accessories made by Loungefly have been appearing in popular teen stores such as Hot Topic, who have also produced a gift card featuring Mac and Cheese. Most of the merchandise sold at Hot Topic started to sell in late 2006, ceased selling in late 2008 with the show's hiatus, and began selling again in 2010 after the series ended.

In 2011 there was a Nintendo 3DS game including the Foster's crew called "Cartoon Network Punch Time Explosion".

In 2005, Cartoon Network Latin America website gave viewers a chance to adopt an imaginary friend online, with Wilt, Coco, and Eduardo as their choices. Similar to Neopets, the players gave their friends food to eat (some good, some not so good) and games to play to keep their imaginary friend happy. At the end of the promotional period, the adopters got a certificate thanking them for participating.

In September 2005, a similar month long game was launched in the United States on Cartoon Network's official site, along with a separate link at FostersFriends.com. In addition to the three previously mentioned friends, players could adopt Uncle Pockets, Cheese, or Ivan. This updated version also used the voice actors associated with those characters, improved graphics, and increased use of Flash animation. Until December 10, 2005, those who made adoptions were able to keep an eye on them. Many of the character reactions have been incorporated into bumpers since May 29, 2006 on Cartoon Network. Through late 2006 and into 2007, this game was known as "Adopt An Imaginary Friend 2" on Cartoon Network's Latin American site. Mac, Bloo, and a few other characters from Foster's are also in the online game FusionFall.

On May 15, 2006, Cartoon Network introduced a new online game, Big Fat Awesome House Party, which allows players to create an online friend to join Bloo and the others in a one-year game online, and earn points that would give them gifts, cards and other on-line "merchandise" for their albums. Their friend, made from one of over 900,000 possible characters, could wind up in a future episode of Foster's. The game became so popular, in May 2007, that Cartoon Network announced that the game would continue for six more months, into November of that year.[10]

From 2006 to 2008, Cartoon Network furnished a Foster's Home for Imaginary Friends float as part of the Macy's Thanksgiving Day Parade. The float was fashioned as a replica of the home.

Each year, the imaginary friends cover a pop song about friendship when the float arrives in front of Macy's Herald Square store. Bloo, Wilt, Coco and Eduardo performed the Beatles' "With A Little Help From My Friends" in 2006; Cheese made a silent cameo at the end. The following year, Cheese covered Queen's "You're My Best Friend" and screamed his catchphrase, "I like chocolate milk!" at the end.

In 2008, the group began to sing "Best Friend"—originally recorded by Harry Nilsson as the theme song to The Courtship of Eddie's Father—when the song suddenly stopped, and Rick Astley came out of the house singing "Never Gonna Give You Up," effectively Rickrolling everyone watching the parade. At this time, Cheese exclaims, "I Like Rickrolling!" [11]