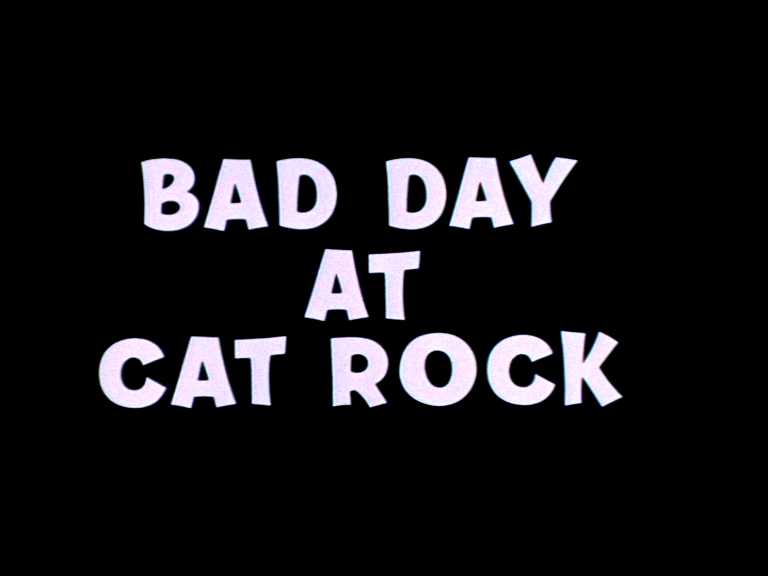 Bad Day at Cat Rock is a Tom and Jerry cartoon produced and directed by . Maurice Noble was the cartoon's co-director, the animation was credited to Ben Washam, Ken Harris, Don Towsley and Dick Thompson. The music was scored by Eugene Poddany, and backgrounds by Phil DeGuard. was on hand to supply the screams, yells, and other vocal effects. The cartoon's title is a pun on the MGM film "", though the cartoon's plot bears no resemblance.

The entire cartoon takes place on a construction site.

Tom walks across a beam and stops in order to stare into the air. A black dotted line is formed in the air, and Tom walks across it. Jerry then creates one himself in the shape of stairs, and then drops the stairs while Tom is on them, causing the cat to fall into a manhole. The title cards are then shown while Tom lights multiple matches.

One of Tom's matches eventually ignites a stash of dynamite, which throws him out of the manhole and into the beam that Jerry is standing on. Jerry hits a second beam and then grabs onto Tom's fur and uses it as a parachute down to a safe wood outcropping. Tom turns up, brimming with rage, and takes his fur back and puts it back on. Tom only runs a few paces before realizing that his tail is still crunched up. He undoes his tail and causes his fur to pop out again, to the cat's dismay.

Tom and Jerry are now chasing across high-rise beams, and Jerry discovers a yellow glove and gets inside it. Tom is so far behind that Jerry has a plan. He "whistles" akin to a police officer and holds out his hand, and then points into the distance. Tom looks over Jerry's shoulder and Jerry punches him. Jerry/glove counts "1, 2, 3" and then Tom gets up and throws punches at the glove. Jerry shakes Tom's hand and then throws him on top of the beam he is standing on, then retrieves a welder which cuts through the beam. Tom falls to earth with a section of the beam on top of his head and hits the ground with no visible damage, until his body weight starts collapsing towards the lower part of his body.

Jerry slides down to the ground and Tom chases him behind some pillars. Both cat and mouse start to poke their heads out from different pillars until Tom sees Jerry's back and tries to poke him with a tack, but only hurts himself. Tom hits the top of the beam and falls to the ground. Jerry waves and whistles at the cat.

The remainder of the cartoon features Tom using a large rock and a see-saw to attempt to reach Jerry.

"ATTEMPT 1:" Tom throws the rock onto the other side of the see-saw, but it is slanted too much to the right and Tom is launched sideways into another network of beams.

"ATTEMPT 2:" Tom throws the rock straight up and squashes himself. Jerry's ears rattle from the recoil.

"ATTEMPT 3:" Tom pitches the rock onto the other end, but it lands on its point and tips over several times, smashing the cat again. Jerry begins to look worried.

"ATTEMPT 4:" Tom throws the rock to the other side, but it squashes the beam into a 90-degree angle and causes Tom to be shifted right and then fall on top of the rock. Jerry starts walking dejectedly across the beam he is on.

"ATTEMPT 5:" Tom throws the rock up and it falls dead center, squeezing the beam and Tom around itself. Jerry kicks a pebble and it falls into a paint can. Jerry sees it next to a bunch of boards and prepares to write.

"ATTEMPT 6:" Tom throws the rock up and dashes away to a safe bunker. When he sees that the rock has landed perfectly, he jumps onto the other end and it catapults him up, but into another beam and back down to the same end of the see-saw, and the rock is thrown up and onto the cat. Jerry writes "The End" on one of the boards.

* tended to play Tom as a feline version of ; this is most evident here. In particular, the bit with the rock and the girder recall Wile E.'s troubles with a in "".