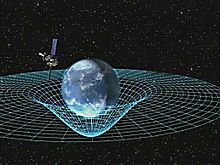 A representation of the geodetic effect.

The geodetic effect (also known as geodetic precession, de Sitter precession or de Sitter effect) represents the effect of the curvature of spacetime, predicted by general relativity, on a vector carried along with an orbiting body. For example, the vector could be the angular momentum of a gyroscope orbiting the earth, as carried out by the Gravity Probe B experiment. The geodetic effect was first predicted by Willem de Sitter in 1916, who provided relativistic corrections to the Earth-Moon system's motion. De Sitter's work was extended in 1918 by Jan Schouten and in 1920 by Adriaan Fokker.[1]

It can also be applied to a particular secular precession of astronomical orbits, equivalent to the rotation of the Laplace–Runge–Lenz vector.[2]

The geodetic effect was verified to a precision of better than 0.5% percent by Gravity Probe B, an experiment which measures the tilting of the spin axis of gyroscopes in orbit about the Earth.[4] The first results were announced on April 14, 2007 at the meeting of the American Physical Society.[5]

To derive the precession, assume the system is in a rotating Schwarzschild metric. The nonrotating metric is

We introduce a rotating coordinate system, with an angular velocity ω, such that a satellite in a circular orbit in the θ = π/2 plane remains at rest. This gives us

with β = sin(θ)2. For a body orbiting in the θ=π/2 plane, we will have β=1, and the body's world-line will maintain constant spatial coordinates for all time. Now, the metric is in the canonical form

From this canonical form, we can easily determine the rotational rate of a gyroscope in proper time

where the last equality is true only for free falling observers for which there is no acceleration, and thus Φ,i = 0. This leads to

From this, we can distill ω,

This is essentially Kepler's law of periods, which happens to be relativistically exact when expressed in terms of the time coordinate t of this particular rotating coordinate system. In the rotating frame, the satellite remains at rest, but an observer aboard the satellite sees the gyroscope's angular momentum vector precessing at the rate ω. This observer also sees the distant stars as rotating, but they rotate at a slightly different rate due to time dilation. Let τ be the gyroscope's proper time. Then

The −2m/r term is interpreted as the gravitational time dilation, while the additional −m/r is due to the rotation of this frame of reference. Let α' be the accumulated precession in the rotating frame. Since α' = ΩΔτ, the precession over the course of one orbit, relative to the distant stars, is given by:

With a first-order Taylor series we find