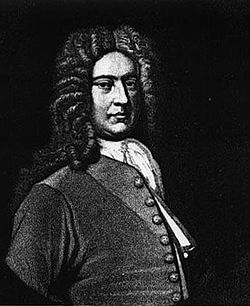 Col. Richard Lee I, “the Immigrant” (1617–1664) arrived in Jamestown in 1639 at the age of 22 with very little to his name other than the patronage of an influential man, Sir Francis Wyatt, the 1st Governor of Virginia. Once there he became Attorney General of the Colony of Virginia, Colonial Secretary of State, and member of the King's Council. He became Clerk of the Quarter Court at Jamestown, within the Secretary of State’s office. He was a loyal supporter of King Charles I of England, and his public offices ceased when Oliver Cromwell seized power in England in 1649. In addition he served as High Sheriff and was a Colonel in the Militia. He was also a tobacco planter, trader, owner and trader of slaves, and employer and importer of indentured English servants (who paid for their passage to America with 7 years of labour). At the time of his death he was the largest landholder in the colony (13,000 acres) and perhaps the richest man in Virginia. He was the great-great-great grandfather of Confederate general Robert E. Lee and great grandfather of President Zachary Taylor.

In 1643 the new Governor, Sir William Berkeley (1606–1677), on the recommendation of Sir Francis Wyatt, appointed Richard as Attorney General of the Colony.[1]

Richard was in the fur trading business with the Indians. Because of this, Richard took his bride away from the capital city, and went to live among the Indians beyond the frontier of settlement. His first patent was for land on the north side of the York River at the head of Poropotank Creek, in what was then York, later Gloucester County. He had received the title to this 1,000 acre (4 km²) tract on August 10, 1642 through the headrights of thirty-eight immigrants unable to pay their own passage, who were brought over by Col. Lee in his own ship on his return from Breda in 1650. However, Lee did not take title to this land until 1646, when there is record of his purchasing 100 acres (0.4 km2) at this location. Richard’s first home was on leased land on the same side of the river, at the head of Tindall’s Creek near the Indian community of Capahosic Wicomico. However, on April 18, 1644, hordes of Powhatan Indians massacred the newcomers to the area, led by Chief Opchanacanough. They killed 300, but were driven back by a successful counterattack. As a result the English abandoned the north side of the river.

Richard and his family escaped and settled at New Poquoson on the lower peninsula between the York River and the James River, where it was safer from attack. He was said to have been the first white man to have settled in the northern neck of Virginia. They resided upon this land for the next nine years, which consisted of 90 acres (360,000 m2) and was a comfortable ride from Jamestown.

On August 20, 1646 he took out a patent for 1,250 acres (5 km²) on the Pamunkey River in York, later New Kent County, at the spot “where the foot Company met with the Boats when they went Pamunkey March under ye command of Capt. William Claiborne” during the counteroffensive against the Indians after the massacre of 1644. He did not develop these lands, but exchanged them in 1648 for a tract of the same land along the north side of the York near the present Capahosic, retaining the 400 acres (1.6 km2) he called “War Captain’s Neck” and selling the other 850 acres (3.4 km2).

Lee became a Burgess of York County from 1647–1651, and in 1649 he was appointed a member of the King’s Council, and a Justice. In 1651 he became Colonial Secretary of State. With the title of Secretary of State, he was next in authority to the Governor, Sir William Berkeley (1606–1677). That same year, Charles I, King of England (1600–1649), was beheaded and Oliver Cromwell (1599–1658) began his control. Since the people in the distant colonies could not believe the incredible news from England, they remained loyal to the Crown and to Charles II (1630–1685), heir to the throne. In 1650, Richard made a voyage to the Netherlands to report Virginia’s loyal adherence to Charles II. However, this does not necessarily mean that he was a devout royalist. It turns out that two years later, he negotiated the capitulation of Virginia to the Commonwealth of England, and was satisfied with the terms that were laid out. At this time, he retired from public office, but continued to represent the interests of Virginia in London.

Richard began to acquire many land grants on the peninsula between the York and the Rappahannock River. After peace with the Indians had been concluded and the lands north of the York reopened for settlement in 1649, Richard was issued a patent of 500 acres (2 km²) on May 24, 1651, on land adjacent to “War Captain’s Neck”. That same year he also acquired an additional 500 acres (2 km²) on Poropotank Creek. He sold 150 acres (0.6 km2) of his original grant, the tract on Poropotank Creek. This left 850 acres (3.4 km2) at the original site, to which he later gave the name “Paradise”, and resided from 1653-1656 in the newly created Gloucester County. He became a part owner of a trading ship, whose cargoes brought indentured servants with headrights that Richard used to enlarge his Virginia property. He spent nearly as much of his time from 1652 to his death in 1664, in London, as he did in Virginia. In about 1656 Richard moved the family to Virginia’s Northern Neck, the peninsula formed by the Rappahannock and Potomac Rivers. Leaving the “Paradise” tract to overseers, they resettled on a spot acquired from the Wicomico Indians, which consisted of 1,900 acres (8 km2). This new land was termed “Dividing Creek”, near what is today the town of Kilmarnock. This tract in later generations became known as that of “Cobbs Hall”.

He later purchased another 2,600 acres (11 km2) in Northumberland County at Machodoc Creek, which empties into the Potomac River. This tract was patented on October 18, 1657, and repatented the following year on June 5, 1658 as 2,000 acres (8 km²). Upon this tract became what was known in later generations as the estates “Mount Pleasant” and “Lee Hall”. He then acquired 4,000 acres (16 km²) farther up the Potomac, near where the city of Washington, D.C., would rise, in what was then Westmoreland, now Fairfax County. One of these would eventually become the site of Mount Vernon.

Disposing of several lesser properties he had obtained, Lee was able to consolidate and develop four major plantations. He had two in Gloucester County: “War Captain’s Neck” and “Paradise”, and two in Northumberland County: “Dividing Creek” and “Machodoc”. He also acquired a plantation called “Lee’s Purchase”, located across the Potomac in Maryland.

In 1658 Richard acquired a residence at Stratford Langthorne, in the County of Essex, then a pleasant suburb of London, and in 1661 he moved his family there. Essex borders London on the east, and the village of Stratford Langthorne was a resort for persons of means who found London unhealthy. It is located about a mile from Stratford-at-Bow on the north side of the Thames in West Ham Parish, until recently the site of great wharves, docks, and the congestion of east London. He did that so that his younger children would have a proper education, seeing as his oldest two sons, John and Richard II, were already students at Oxford. Nevertheless, he eventually wanted his children to reside in Virginia. Though now a resident of England, he continued in his role as a Virginia planter and merchant.

During 1663, Richard Lee, with his wife and children, journeyed to England, where he had his will executed in London on 6 February 1663-4 just before returning alone to Virginia to oversee his interests in the Colony. The exact date of his death is unknown, but had to be before 20 April 1664 when his son John made an application for land due to his father, deceased. (John had probably returned to Virginia with his father.) It is also not known where he died, but it may have been at his home at "Dividing Creeks", Northumberland Co., Virginia.[2][3]

Richard Lee’s will directed that his wife and children, "all except Francis if he be pleased", were to return to Virginia. His property at Stratford in England was to be sold, and the proceeds be used to discharge his debts, to pay for the education of his 2 eldest sons John and Richard, and to provide dowries for his daughters, Elizabeth and Anne. Richard left land to all his sons, and to his widow Anna (or Anne) for her lifetime. In Virginia, he left the "Dividing Creeks" and "Mocke Nock" plantations to his widow for her lifetime and afterwards to be divided among his 3 youngest sons, the "Machodoc" plantation and 3 islands in the bay of Chesapeake to his son John, the "Paradise" plantation to Richard, and "Paper-makers Neck" and "War Captain's Neck" to Francis, William "all the land on the Maryland side, and the remaining plantations and land to William and his 2 youngest sons Hancock and Charles. Richard had also been actively involved in the slave trade[1] and he left his widow 5 "negro" slaves for "during her widowhood and no longer" and 10 English (indentured) servants. He gave John 10 "negro" slaves as well as 10 English (indentured) servants. He left Richard all the English (indentured) servants on the "Paradise" plantation, and Francis 5 "negro" slaves and 10 English (indentured) servants. Other property that was divided among his 8 surviving children included livestock and furniture. His share in 2 trading ships he left to Francis.[3]

His widow Anna (or Anne) married again to Edmund Lister before 24 September 1666.[3] The date of her death is unknown, although legend has it that she was buried beside Richard near the house at "Dividing Creeks".

An interesting claim is made in many genealogies that Richard's wife was Anne Constable, the daughter of Francis Constable the London publisher.[5]

Richard I Lee and his wife Ann had 10 children

Today the different branches of the Lee family are known as: "Cobb's Hall", "Mount Pleasant", "Ditchley", "Lee Hall", “Blenheim”, “Leesylvania”, “Dividing Creek”, and "Stratford". These were the estate names of the descendants of Richard Lee I that are still referred to today when talking of Lee descendancy. An interesting note is that Richard had patented somewhere in the neighborhood of 15,000 acres (61 km²) on both sides of the Potomac, in Maryland and in Virginia. Part of this land later became George Washington’s Mount Vernon. When he divided his estate among his children, he also left them the products of the several plantations including white indentured servants, Negro slaves, livestock, household furnishings, silver, and many other luxuries.