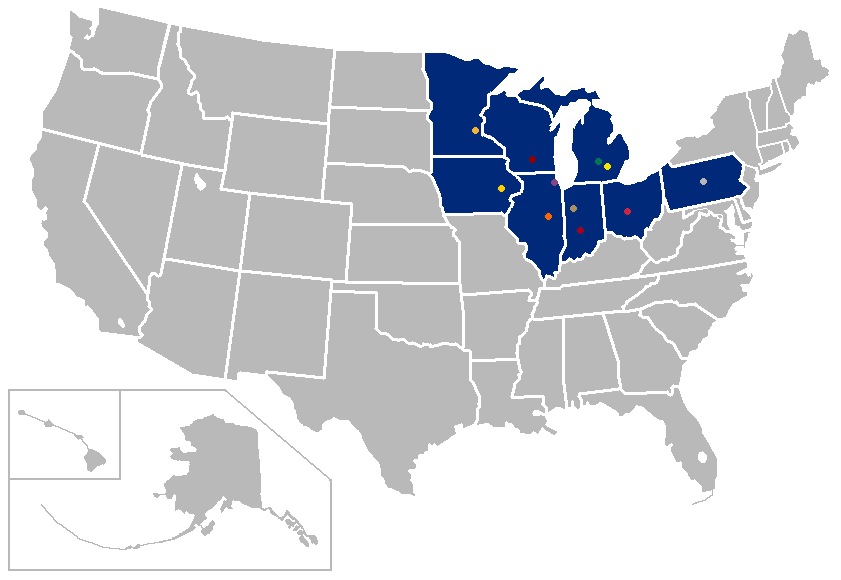 map_size = 250The Big Ten Conference is the ' oldest Division I college athletic conference. Its eleven member institutions are located primarily in the ern , stretching from and in the west to in the east. The conference enjoys the prestige of both high athletic achievement and academic excellence. Nine of the eleven conference schools are considered [ [http://www.amazon.com/gp/reader/006093459X/ Greenes' Guides: The Public Ivies] (accessed on September 19, 2007); see also [http://www.jbhe.com/news_views/49_blackenrollment_publicivies.html] .] (Purdue Unversity and the private Northwestern being the only exception). The conference competes in the NCAA's Division I; its football teams compete in the Football Bowl Subdivision (FBS; formerly known as Division I-A), the highest level of NCAA competition in that sport. Member schools of the Big Ten also are members of the , a leading educational consortium. Despite the conference's name, since joined in 1990, there have been 11 schools in the Big Ten, as signified by the hidden "11" in the Big Ten Conference (each "1" is on either side of the "T" in "Ten"). The geographic center of the Big Ten is in , near Michigan City.

The Big Ten is the only Division I conference to have all of its member institutions affiliated with the , a prestigious collection of 60 research institutions, and leads all conferences in the total amount of research expenditures.

Since 1946, the Big Ten champion has had a tie-in with the Rose Bowl game, now a BCS bowl. The Big Ten also has tie-ins with six non-BCS bowls. Picks are made after BCS selections; if two Big Ten teams participate in BCS bowls, the bowl with the #2 pick will have the first pick of the remaining teams in the conference:

Michigan appeared in the first , the . The Big Ten did not allow their schools to participate in bowl games until the agreement struck with the Pacific Coast Conference for the . From 1946 through 1971, the Big Ten did not allow the same team to represent the conference in consecutive years in the Rose Bowl with an exception made after the 1961 season in which Minnesota played in the after playing in the due to Ohio State declining the bid. It was not until the 1975 season that the Big Ten allowed teams to play in bowl games other than the Rose Bowl. Due to those rules, Big Ten powers such as Michigan and Ohio State have lower numbers of all-time bowl appearances than powerhouse teams from the (formerly the and Southwest Conference) and , which always placed multiple teams in bowl games every year.

Although the pick order usually corresponds to the conference standings, the bowls are not required to make their choices strictly according to the won-lost records; many factors influence bowl selections, especially the turnout of the fans for past bowl games.

Since 1999, the Big Ten has taken part in the with the . The ACC holds an 9-0 record against the Big Ten, and Michigan State is the only Big Ten school with a winning record in the challenge.

Indiana and Purdue have a heated rivalry in college basketball between the two schools with the most Big Ten basketball championships. Michigan and Michigan State have an in-state rivalry. Due to their recent successes and familiarity between their players and coaching staffs, Illinois and Michigan State have developed a basketball rivalry based more on competitive matches and mutual respect, rather than animosity, which could characterize Illinois' rivalry with Indiana. These schools share a rivalry which has intensified at times, most recently due to Eric Gordon's de-committal from Illinois in order to attend and play for Indiana.

Purdue, Michigan State and Michigan are among the Big Ten football teams that have rivalries with Notre Dame. After the University of Southern California with 28 wins, the Michigan State Spartans have the winningest record against the Irish, with 27. The Purdue Boilermakers follow with 26.

Penn State had a longstanding rivalry with Pittsburgh of the , but the two schools have not met since 2000. Penn State also had long histories with independent Notre Dame; West Virginia, Syracuse, and Rutgers of the ; Maryland and of the ACC; and Temple, of the Mid-American Conference (MAC). Penn State also has strong intrastate rivalries with universities Bucknell in men's basketball and Lehigh in wrestling. Most of these rivalries were cultivated while Penn State operated independent of conference affiliation; the constraints of playing a full conference schedule, especially in football, have reduced the number of meetings between Penn State and its non-Big Ten rivals.

Iowa has an in-state rivalry with Iowa State, with the winner getting the . Iowa also holds rivalries in basketball with Drake and Northern Iowa.

Indiana has an out-of conference rivalry with Kentucky, but the rivalry has a much higher profile in than in football.

Illinois has a longstanding basketball rivalry with Missouri, with the two men's teams squaring off annually in the "" game in St. Louis. This rivalry has been carried over into football as "The Arch Rivalry" with games played at the in St. Louis in 2002 and 2003 and four games scheduled from 2007 to 2010. [http://www.stlouissports.org/pressbox/releases/missouriillinois82505.php]

Wisconsin has a long-standing, in-state basketball rivalry with Marquette. The series has intensified as of late with both teams having made the Final Four in recent years. The schools also played an annual football game before Marquette abandoned its football program in 1961.

In the early days of the Big Ten, the Chicago-Michigan game was played on , usually with conference championship implications and was considered one of the first major rivalries of the conference. Also in the early days of the conference, and at 's insistence, Northwestern and Notre Dame had a yearly contest, with the winner taking home a shillelagh, much like the winner of the USC-Notre Dame and Purdue-Notre Dame contests now receive. The Northwestern-Notre Dame shillelagh was largely forgotten by the early 1960s and is now solely an element of college football's storied past.

The Big Ten has the distinction of being the conference with the most stadiums seating over 100,000, at three (Michigan Stadium, Ohio Stadium, and Beaver Stadium). The only other stadium of that size in college football is at the in the .

The three stadiums rank third, fourth, and sixth in the list of the largest sports stadiums in the world. (Camp Randall ranks 42nd in the world.)