Digital television (DTV) is the transmission of audio and video by digital signals, in contrast to the analog signals used by analog TV. Many countries are replacing broadcast analog television with digital television to allow other uses of the television radio spectrum. 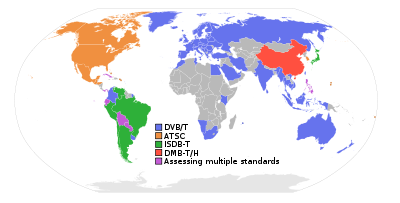 Digital television supports many different picture formats defined by the broadcast television systems which are a combination of size, aspect ratio (width to height ratio).

One of several different HDTV formats that can be transmitted over DTV is: 1280 × 720 pixels in progressive scan mode (abbreviated 720p) or 1920 × 1080 pixels in interlaced video mode (1080i). Each of these utilizes a 16:9 aspect ratio. (Some televisions are capable of receiving an HD resolution of 1920 × 1080 at a 60 Hz progressive scan frame rate — known as 1080p.) HDTV cannot be transmitted over current analog television channels because of channel capacity issues.

Each commercial broadcasting terrestrial television DTV channel in North America is permitted to be broadcast at a bit rate up to 19 megabits per second. However, the broadcaster does not need to use this entire bandwidth for just one broadcast channel. Instead the broadcast can use the channel to include PSIP and can also subdivide across several video subchannels (aka feeds) of varying quality and compression rates, including non-video datacasting services that allow one-way high-bandwidth streaming of data to computers like National Datacast.

A broadcaster may opt to use a standard-definition (SDTV) digital signal instead of an HDTV signal, because current convention allows the bandwidth of a DTV channel (or "multiplex") to be subdivided into multiple digital subchannels, (similar to what most FM radio stations offer with HD Radio), providing multiple feeds of entirely different television programming on the same channel. This ability to provide either a single HDTV feed or multiple lower-resolution feeds is often referred to as distributing one's "bit budget" or multicasting. This can sometimes be arranged automatically, using a statistical multiplexer (or "stat-mux"). With some implementations, image resolution may be less directly limited by bandwidth; for example in DVB-T, broadcasters can choose from several different modulation schemes, giving them the option to reduce the transmission bitrate and make reception easier for more distant or mobile viewers.

There are a number of different ways to receive digital television. One of the oldest means of receiving DTV (and TV in general) is using an antenna (television) (known as an aerial in some countries). This way is known as Digital terrestrial television (DTT). With DTT, viewers are limited to whatever channels the antenna picks up. Signal quality will also vary.

Other ways have been devised to receive digital television. Among the most familiar to people are digital cable and digital satellite. In some countries where transmissions of TV signals are normally achieved by microwaves, digital MMDS is used. Other standards, such as Digital multimedia broadcasting (DMB) and DVB-H, have been devised to allow handheld devices such as mobile phones to receive TV signals. Another way is IPTV, that is receiving TV via Internet Protocol, relying on Digital Subscriber Line (DSL) or optical cable line. Finally, an alternative way is to receive digital TV signals via the open Internet. For example, there is P2P (peer-to-peer) Internet television software that can be used to watch TV on a computer.

Some signals carry encryption and specify use conditions (such as "may not be recorded" or "may not be viewed on displays larger than 1 m in diagonal measure") backed up with the force of law under the WIPO Copyright Treaty and national legislation implementing it, such as the U.S. Digital Millennium Copyright Act. Access to encrypted channels can be controlled by a removable smart card, for example via the Common Interface (DVB-CI) standard for Europe and via Point Of Deployment (POD) for IS or named differently CableCard.

Digital television signals must not interfere with each other, and they must also coexist with analog television until it is phased out. The following table gives allowable signal-to-noise and signal-to-interference ratios for various interference scenarios. This table is a crucial regulatory tool for controlling the placement and power levels of stations. Digital TV is more tolerant of interference than analog TV, and this is the reason a smaller range of channels can carry an all-digital set of television stations.[citation needed]

Interaction happens between the TV watcher and the DTV system. It can be understood in different ways, depending on which part of the DTV system is concerned. It can also be an interaction with the STB only (to tune to another TV channel or to browse the EPG).

Modern DTV systems are able to provide interaction between the end-user and the broadcaster through the use of a return path. With the exceptions of coaxial and fiber optic cable, which can be bidirectional, a dialup modem, Internet connection, or other method is typically used for the return path with unidirectional networks such as satellite or antenna broadcast.

In addition to not needing a separate return path, cable also has the advantage of a communication channel localized to a neighborhood rather than a city (terrestrial) or an even larger area (satellite). This provides enough customizable bandwidth to allow true video on demand.

1seg (1-segment) is a special form of ISDB. Each channel is further divided into 13 segments. The 12 segments of them are allocated for HDTV and remaining segment, the 13th, is used for narrowband receivers such as mobile television or cell phone.

DTV has several advantages over analog TV, the most significant being that digital channels take up less bandwidth, and the bandwidth needs are continuously variable, at a corresponding reduction in image quality depending on the level of compression as well as the resolution of the transmitted image. This means that digital broadcasters can provide more digital channels in the same space, provide high-definition television service, or provide other non-television services such as multimedia or interactivity. DTV also permits special services such as multiplexing (more than one program on the same channel), electronic program guides and additional languages (spoken or subtitled). The sale of non-television services may provide an additional revenue source.

Digital signals react differently to interference than analog signals. For example, common problems with analog television include ghosting of images, noise from weak signals, and many other potential problems which degrade the quality of the image and sound, although the program material may still be watchable. With digital television, the audio and video must be synchronized digitally, so reception of the digital signal must be very nearly complete; otherwise, neither audio nor video will be usable. Short of this complete failure, "blocky" video is seen when the digital signal experiences interference.

Television sets with only analog tuners cannot decode digital transmissions. When analog broadcasting over the air ceases, users of sets with analog-only tuners may use other sources of programming (eg cable, recorders) or may purchase set-top convertor boxes to tune in the digital signals. In the United States, a government-sponsored coupon was available to offset the cost of an external converter box. Analog switch-off (of full-power stations) took place on June 12, 2009 in the United States,[5] July 24, 2011 in Japan,[6] August 31, 2011 in Canada,[7] and is scheduled for 2012 in the United Kingdom[8] and Ireland,[9] by 2013 in Australia[10], by 2015 in the Philippines and Uruguay and by 2017 in Costa Rica.

The adoption of a broadcast standard incompatible with existing analog receivers has created the problem of large numbers of analog receivers being discarded during digital television transition. An estimated 99 million unused analog TV receivers are currently in storage in the US alone[11] and, while some obsolete receivers are being retrofitted with converters, many more are simply dumped in landfills[12] where they represent a source of toxic metals such as lead as well as lesser amounts of materials such as barium, cadmium and chromium.[13]

While the glass in cathode ray tubes contains an average of 3.62 kilograms (8.0 lb) of lead[14][unreliable source?] (amount varies from 1.08 lb to 11.28 lb, depending on screen size but the lead is "stable and immobile"[15]) which can have long-term negative effects on the environment if dumped as landfill,[16] the glass envelope can be recycled at suitably equipped facilities.[17] Other portions of the receiver may be subject to disposal as hazardous material.

Local restrictions on disposal of these materials vary widely; in some cases second-hand stores have refused to accept working color television receivers for resale due to the increasing costs of disposing of unsold TVs. Those thrift stores which are still accepting donated TVs have reported significant increases in good-condition working used television receivers abandoned by viewers who often expect them not to work after digital transition.[18]

In Michigan, one recycler has estimated that as many as one household in four will dispose of or recycle a TV set in the next year.[19] The digital television transition, migration to high-definition television receivers and the replacement of CRTs with flatscreens are all factors in the increasing number of discarded analog CRT-based television receivers.

DTV images have some picture defects that are not present on analog television or motion picture cinema, because of present-day limitations of bandwidth and compression algorithms such as MPEG-2. This defect is sometimes referred to as "mosquito noise".[20]

Because of the way the human visual system works, defects in an image that are localized to particular features of the image or that come and go are more perceptible than defects that are uniform and constant. However, the DTV system is designed to take advantage of other limitations of the human visual system to help mask these flaws, e.g. by allowing more compression artifacts during fast motion where the eye cannot track and resolve them as easily and, conversely, minimizing artifacts in still backgrounds that may be closely examined in a scene (since time allows).

Changes in signal reception from factors such as degrading antenna connections or changing weather conditions may gradually reduce the quality of analog TV. The nature of digital TV results in a perfectly decodable video initially, until the receiving equipment starts picking up interference that overpowers the desired signal or if the signal is too weak to decode. Some equipment will show a garbled picture with significant damage, while other devices may go directly from perfectly decodable video to no video at all or lock up. This phenomenon is known as the digital cliff effect.

For remote locations, distant channels that, as analog signals, were previously usable in a snowy and degraded state may, as digital signals, be perfectly decodable or may become completely unavailable. In areas where transmitting antennas are located on mountains, viewers who are too close to the transmitter may find reception difficult or impossible because the strongest part of the broadcast signal passes above them. The use of higher frequencies will add to these problems, especially in cases where a clear line-of-sight from the receiving antenna to the transmitter is not available.