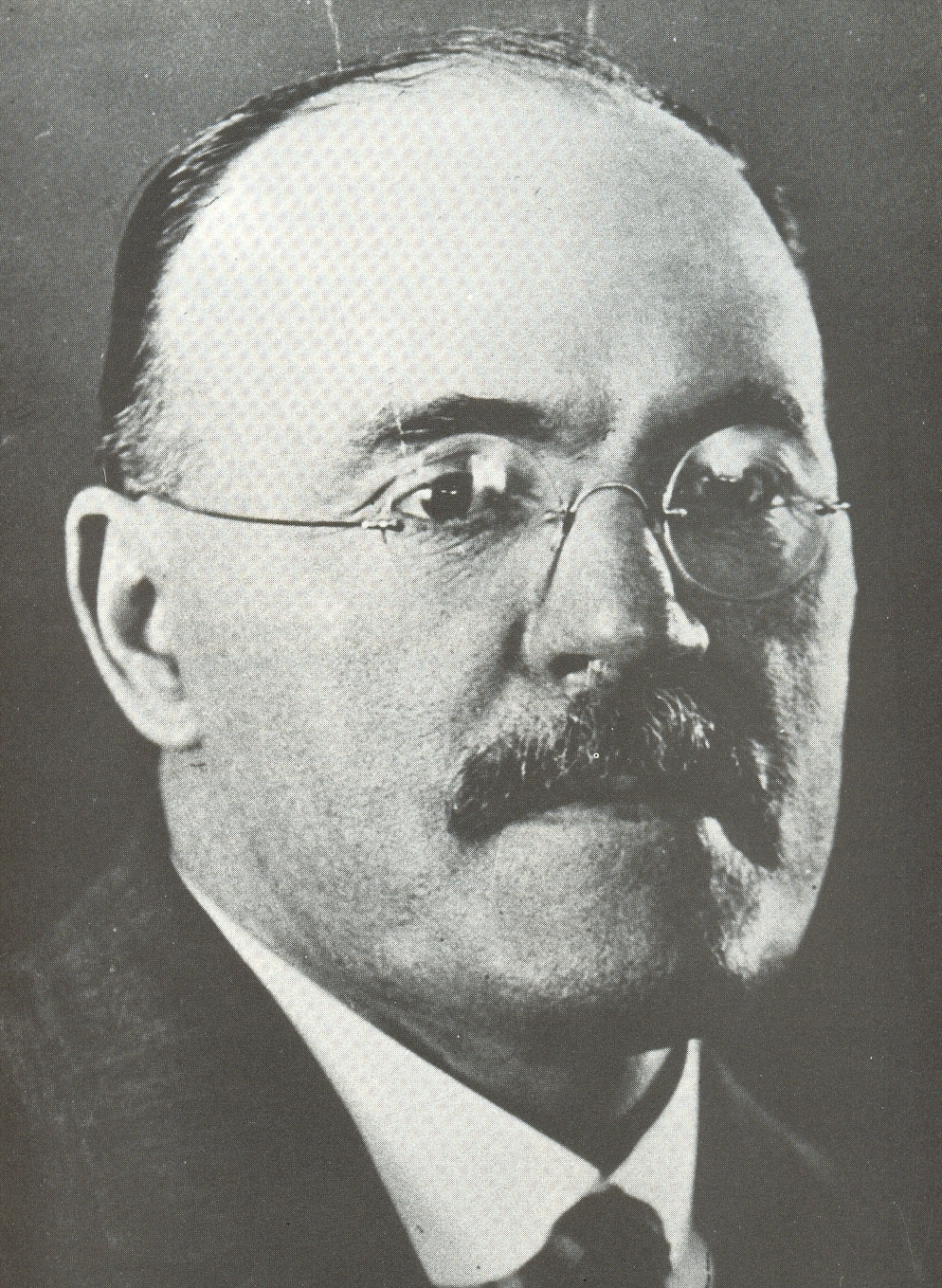 John Thomas Lang ( - ), n politician, usually referred to as J.T. Lang during his career, familiarly known as "Jack" and nicknamed "The Big Fella," was for two terms (1925-27, 1930-32). He is the only Premier of an Australian state to have been dismissed by the state Governor.

Lang was born into an impoverished family in the slums of . He was born in George Street, Sydney. His father, James Henry Lang, a watchmaker and jeweller, was chronically ill and often unable to work. His mother was Mary Whelan. While still of primary school age at St. Francis ' School, Brickfield Hill, he sold newspapers on the streets of downtown Sydney to help support his family, and received a minimal education.

During the banking crash of the 1890s which devastated Australia, Lang became interested in politics, frequenting radical bookshops and helping print newspapers and publications for the infant Labor Party, which contested its first election in in 1891. He then did odd jobs in the agricultural districts near Parramatta, driving a horse bus and hiring out on farms. He soon moved back to Sydney with his parents, where at the age of 19 he married Hilda Bredt, the 17-year-old daughter of prominent feminist and socialist . Hilda's sister, also named Bertha, was married to the author and poet .

Lang then became a junior office assistant for an accounting practice, where his shrewdness and intelligence saw his career advance. Around 1900 he became the manager of a real estate firm in the then semi-rural suburb of Auburn. He was so successful in this job that he soon set up his own real estate business in an area very much in demand by working-class families looking to escape the squalor and overcrowding of the inner-city slums.

Lang continued in his political pursuits, soon becoming an on Auburn Municipal Council and eventually mayor. He was elected as a member of the in 1913 for the electorate of Granville, serving as a backbencher in the Labor Party government led by . His financial skills led him to become in Premier Storey's Labor Government from 1920 to 1922. Due to the post- financial recession the state's accounts were in a persistent deficit, and Lang managed to cut this deficit significantly. From 1920 to 1927, he was a member for the multi-member seat of Parramatta.

After the (ALP) lost government in 1922, Lang was elected as Opposition Leader in 1923 by his fellow Labor Party . He led the ALP to victory in the 1925 NSW general election and became Premier.

During his first term as Premier, Lang carried out many reforms and social programmes, including state pensions for widowed mothers with dependent children under fourteen, a universal and mandatory system of workers' compensation for death, illness and injury incurred on the job, funded by compulsory premiums levied on employers, the abolition of student fees in state-run high schools and improvements to various welfare schemes such as child endowment. His government also carried out improvements to major roads, including the paving of much of the and the .

Lang also restored the seniority and conditions to and New South Wales Government Tramways workers who had been sacked or demoted after the of 1917, including a future Prime Minster of Australia.

In the area of political reform, Lang established in s - previously only those who owned real estate in a city, municipality or shire could vote in that area's local council elections. But his attempts to abolish the appointive upper house of the NSW Parliament, the Legislative Council, were unsuccessful.

After Labor's defeat at the 1927 election, Lang was Opposition Leader again from 1927 to October 1930. He was a member for Auburn from 1927 to 1946. In this period the had begun in earnest with devastating effects on the welfare and security of Australia.

In 1930, more than one in five adult males in New South Wales was without a job. Australian governments responded to the Depression with measures that, Lang claimed, made circumstances even worse - cuts to government spending, civil service salaries and public works cancellations. Lang vigorously opposed these measures and was elected in a landslide in October 1930.

As Premier, Lang refused to cut government salaries and spending, a stand which was popular with his constituents, but which made the state's fiscal position even more parlous. He passed laws restricting the rights of landlords to evict defaulting tenants, and insisted on paying the legal to all workers on relief projects.

In 1931 at an economic crisis conference in , Jack Lang issued his own programme for economic recovery. The "Lang Plan" advocated the repudiation of interest payments to overseas creditors until domestic conditions improved, the abolition of the Gold Standard to be replaced by a "Goods Standard" where the amount of money in circulation was linked to the amount of goods produced, and the immediate injection of £18 million of new money into the economy in the form of Commonwealth Bank of Australia credit. The Prime Minister and all other state Premiers refused.

I am just a plain, blunt man with a simple, straightforward story to tell of what seems to me to be the position in Australia to-day ... I bring a message of hope to the people of Australia

and his wife spoke of him to the audience:

... one day, he said to me: ‘Look, my girl, we have no money, and I suppose we never will have any, but we have our children. We have nine of them, you know, and they are going to live in Australia when you and I are no longer here, and, by heaven, I am not going to allow anyone to ruin Australia if I can lift a finger to prevent it’

Lang was a powerful orator, and during the crisis years of the Depression he addressed huge crowds in Sydney and other centres, promoting his populist program and denouncing his opponents and the wealthy in extravagant terms. His followers promoted the slogans "Lang is Right" and "Lang is Greater than Lenin." But Lang was not a revolutionary or even a socialist, and he loathed the Communist Party, which in turn denounced him as a fascist.

On Lang opened the . Lang caused some controversy when he insisted on officially opening the bridge himself, rather than allowing the Governor, the King's representative in NSW, to do so. Just as Lang was about to cut the ribbon to open the Sydney Harbour Bridge, Captain , a member of the extreme right wing movement, galloped up to the ribbon and slashed it with a sabre. The New Guard also planned to kidnap Lang, and plotted a coup against him during the crisis that brought Lang's premiership to an end.

Early in 1931 Jack Lang released his own plan to combat the Depression; this became known as "the Lang Plan". This was in contrast to the "Melbourne Agreement" which all other State Governments and the Federal Government had agreed to in 1930. Key points of the Lang Plan included the reduction of interest owed by Australian Governments on debts within Australia to 3%, the cancellation of interest payments to overseas bondholders and financiers on government borrowings, the injection of more funds into the nation's money supply as central bank credit for the revitalisation of industry and commerce, and the abolition of the , to be replaced by a "Goods Standard," whereby the amount of currency in circulation would be fixed to the amount of goods produced within the Australian economy. The banks had indicated that if he paid the interest they would advance him an additional amount which was greater than the interest, thus giving him a positive cash flow.

Lang was violently opposed to the agreed to by the federal Labor government of and all the other premiers, which called for even more stringent cuts to government spending to balance the budget. In October 1931 Lang's followers in the federal House of Representatives crossed the floor to vote with the conservative and bring down the Scullin government. This action split the NSW Labor Party in two - Lang's followers became known as , while Scullin's supporters, led by Chifley, became known in NSW as Federal Labor. Most of the party's branches and affiliated trade unions supported Lang.

Since the Commonwealth Government had become responsible for state debts in 1928 under an amendment to the Constitution, the new government of paid the interest to the overseas bondholders, and then set about extracting the money from NSW by passing the "Financial Enforcement Act", which the High Court held to be valid.

In response, Lang withdrew all the state's funds from government bank accounts and held them at Trades Hall in cash, so the federal government could not gain access to the money. The Governor, Sir , a retired officer, advised Lang that in his view this action was illegal, and that if Lang did not reverse it he would dismiss the government. Lang stood firm, and on the Governor withdrew Lang's commission and appointed the UAP leader, Bertram Stevens, as premier. Stevens immediately called an , at which Labor was heavily defeated. Gerald Stone, in his book "1932", states that there is evidence that Lang considered arresting the Governor to prevent the Governor from dismissing him. The possibility of this was sufficiently high that the armed forces of the Commonwealth, who would have come to the assistance of the Governor, were put on alert.

Lang continued to lead the Labor Opposition, although the NSW Branch of the ALP remained in secession from the rest of the party. The UAP won the elections of 1935 and 1938. After this third defeat the Federal Labor forces began to gain ground in NSW, as many union officials became convinced that Labor would never win with Lang as leader. Lang was ousted as NSW Opposition Leader in 1939 and was replaced by , who became Premier in 1941.

Lang was expelled from the ALP in 1942, and started his own parallel Labor Party, called the ALP (Non-Communist), but this time with only minority support in the NSW party and unions. He remained a member of the Legislative Assembly until 1946, when he was unexpectedly elected as the Member for Reid in the . (He was given Liberal Party preferences and was elected on a minority vote.) In 1949 he was defeated and never held office again, despite a bid to be elected to the Senate in 1951.

Lang spent his long retirement editing his newspaper "", and wrote several books about his political life, including "The Great Bust", "I Remember" and "The Turbulent Years". He grew increasingly conservative as he grew older, supporting the after the rest of the labour movement had abandoned it. To the end of his life, he proudly proclaimed that "Lang was Right." Lang also spent time visiting Sydney schools recounting recollections of his time in office to his young audience. Lang gave a number of lectures at Sydney University circa 1972-1973, at which he discussed his time in office and other topics such as economic reform, although tapes of these lectures do not exist. He was re-admitted to the Labor Party in 1971, aided by his young protege .

Lang died in Auburn in September 1975, aged 98, and was commemorated with a packed house and overflowing crowds outside Sydney's St. Mary's Cathedral at his and memorial service. His funeral was attended by prominent Labor leaders including then Prime Minister .

Lang's family contributed greatly to the Auburn community. For some years, his granddaughters worked at the local Catholic schools including the St. John of God Girls' High School in Auburn (now part of Trinity Catholic College, Auburn).

Jack Lang was the brother-in-law of Australian author and poet , by virtue of the fact that each of them married a daughter of Labor activists and booksellers Bertha Bredt and W.H.T. McNamara (who was their stepfather); Lang married Hilda Amelia Bredt on , and Lawson married Hilda's elder sister Bertha Bredt junior on of the same year. Both of these marriages eventually broke down.