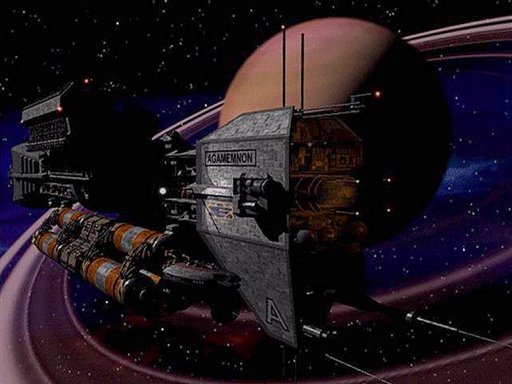 "This article refers to the Babylon 5 Starship. For other uses of the name Agamemnon, please see the page."

The "Agamemnon" was one of the first "Omega" class starships to be built by following the .

In 2260, the "Agamemnon" was patrolling the when Sheridan took the "White Star" to destroy the Shadow cruiser being studied by Earth Alliance forces. The Shadow vessel had been activated when a human was merged with the ship to act as a CPU, but it was done incorrectly, and the ship went insane. The Shadow vessel was lured into Jupiter's atmosphere where it was crushed by the pressure and gravity of Jupiter. The "Agamemnon" was sent to investigate, and found the "White Star" in the atmosphere. The crew of the "Agamemnon" did not realize that Sheridan was in command of the "White Star". "Agamemnon" tried to force Sheridan to surrender, but he was able to escape through establishing a jump point at the edge of Jupiter's atmosphere. President Clark used this incident as an excuse to declare . Clark's actions later provoked Sheridan and a number of others in Earthforce to go to war against Clark.

During the Earth civil war to overthrow President Morgan Clark the "Agamemnon" defected to rebel forces led by Sheridan. She participated in a number of actions against loyalist forces. It was the "Agamemnon" that retrieved an escape pod from a loyalist ship. This escape pod had a duty officer who knew Clark was planning to ambush Sheridan's forces at sector 300. Commander Ivanova was able to intercept Clark's Shadow enhanced starships, and even though Ivanova was critically injured she was able to destroy all the Shadow enhanced ships.

Ivanova asked Sheridan to command the final battle from the "Agamemnon" to give a legitimate appearance to Sheridan's forces. Sheridan and Captain James agreed to this. Sheridan arranged for telepaths altered by the Shadows for use as CPUs in their ships to be sneaked on board the loyalist ships at Mars. This disabled nearly all the forces, and the White Stars disabled the remaining ships. Even though it cost the 30 telepaths their lives, it saved the crews of these ships - nearly 30,000 men and women.

When the Agamemnon and the rest of Sheridan's fleet arrived at Earth, the Senate rose up and went to arrest Clark. President Clark knew he was going to be arrested, so in a final vindictive act he turned Earth's planetary defense grid on the planet as a "Scorched Earth" policy and committed . Sheridan's forces destroyed the defense grid. The last platform was destroyed by the EAS "Apollo", under the command of - the commander of the loyalist forces. During this final battle, the "Agamemnon" was seriously damaged by the defense platforms, and its weapons were disabled. In a desperate attempt to destroy the last defense platform before it could fire on 's , Sheridan ordered the "Agamemnon" to ram it. Lefcourt's last minute intervention saved not only the crew of the Agamemnon but millions of people living on Earth.

"Agamemnon"'s current status has not been revealed. It's not known for sure whether she was placed into dock for repairs, or if the damage was so severe that she had to be taken out of service.