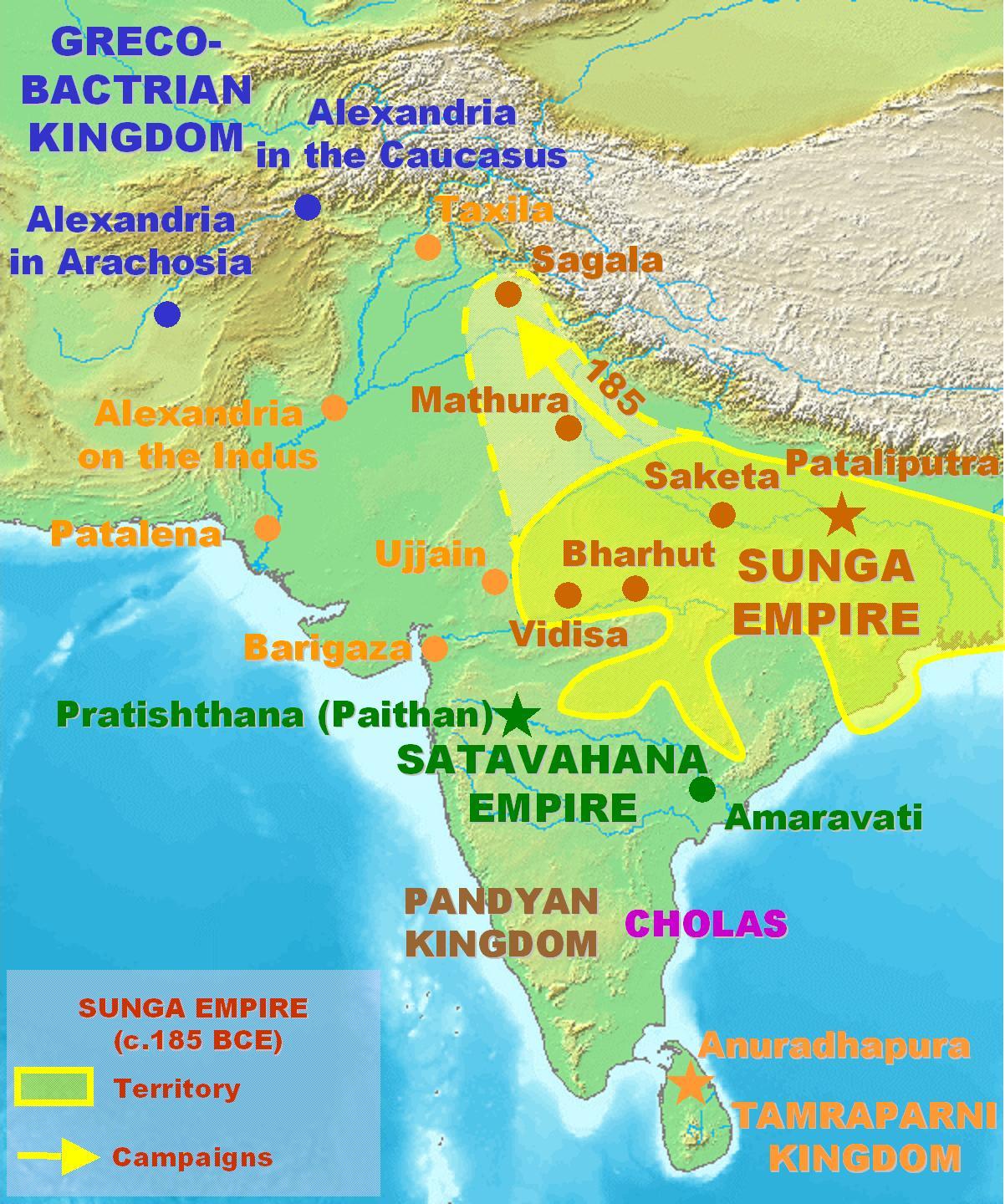 The Sunga Empire (or Shunga Empire) is a dynasty that controlled North-central and Eastern India as well as parts of the northwest (now ) from around 185 to . It was established after the fall of the Indian Mauryan empire. The capital of the Sungas was . Later kings such as also held court at , modern in Eastern . [ [http://links.jstor.org/sici?sici=0004-3648%281975%2937%3A1%2F2%3C101%3AASCFV%3E2.0.CO%3B2-R&size=LARGE] ] The Sunga Empire is noted for its numerous wars with both foreign and indigenous powers. Although very much isn't known, the school of art and the works of colored North India during this empire.

The was established in , about 50 years after 's death, when the king , the last of the rulers, was assassinated by the then commander-in-chief of the Mauryan armed forces, ["Pusyamitra is said in the Puranas to have been the "senānī" or army-commander of the last Maurya king Brhadratha" The Yuga Purana, Mitchener, 2002.] , while he was taking the Guard of Honour of his forces. Pusyamitra Sunga then ascended the throne.

Pushyamitra Sunga became the ruler of the and neighbouring territories. The kingdom of Pushyamitra was extended up to Narmada in the south, and controlled and in the Punjab in the north-western regions, and the city of Ujjain [ [http://www.britannica.com/eb/article-46867/India India :: The Shunga kingdom - Britannica Online Encyclopedia ] ] in central India. The Kabul Valley and much of the Punjab passed into the hands of the and the to the .

Pushyamitra died after ruling for 36 years (187-151 BCE). He was succeeded by son . This prince is the hero of a famous drama by one of India's greatest playwrights, . Agnimitra was viceroy of Vidisha when the story takes place. The power of the Sungas gradually weakened. It is said that there were ten Sunga kings.

The Sungas were succeeded by the around .

Following the Mauryans, the first king was , who is frequently linked in tradition with the persecution of Buddhists and a resurgence of that forced Buddhism outwards to , and .

Later Sunga kings were seen as amenable to Buddhism and as having contributed to the building of the stupa at . [ Akira Hirakawa, Paul Groner, "A History of Indian Buddhism: From Sakyamuni to Early Mahayana", Motilal Banarsidass Publ., 1996, ISBN 8120809556 pg 223]

Brahmanism competed in political and spiritual realm with Buddhism in the . Buddhism flourished in the realms of the Bactrian kings. [ Ashok Kumar Anand, "Buddhism in India", 1996, Gyan Books, ISBN 8121205069 pg 91-93]

War and conflict characterized the Sunga period. They are known to have warred with the Kalingas, Satavahanas, the Indo-Greeks, and possibly the Panchalas and Mathuras.

The Sunga Empire's wars with the Indo-Greek Kingdom figure greatly in the history of this period. From around the ruler Demetrius, conquered the Kabul Valley and is theorized to have advanced into the trans-Indus. The Indo Greek Menander is credited with either joining or leading a campaign to Pataliputra with other Indian Kings; however, very little is know about the exact nature and success of the campaign. The net result of these wars remains uncertain.

Some interpretations of the Mahabharata and Yuga Purana have attempted to account for this:

The "Anushasanaparava" of the affirms that the city of Mathura was under the joint control of the Yavanas and the . ["tatha Yavana Kamboja Mathuram.abhitash cha ye./ ete ashava.yuddha.kushaladasinatyasi charminah."//5 — (MBH 12/105/5, Kumbhakonam Ed)]

Also the Hindu text of the "", which describes Indian historical events in the form of a prophecy, ["For any scholar engaged in the study of the presence of the Indo-Greeks or Indo-Scythians before the Christian Era, the "Yuga Purana" is an important source material" Dilip Coomer Ghose, General Secretary, The Asiatic Society, , 2002] relates the attack of the Indo-Greeks on the capital Pataliputra, a magnificent fortified city with 570 towers and 64 gates according to , ["The greatest city in India is that which is called Palimbothra, in the dominions of the Prasians [...] Megasthenes informs us that this city stretched in the inhabited quarters to an extreme length on each side of eighty stadia, and that its breadth was fifteen stadia, and that a ditch encompassed it all round, which was six hundred feet in breadth and thirty cubits in depth, and that the wall was crowned with 570 towers and had four-and-sixty gates." Arr. Ind. 10. "Of Pataliputra and the Manners of the Indians.", quoting Megasthenes [http://www.mssu.edu/projectsouthasia/history/primarydocs/Foreign_Views/GreekRoman/Megasthenes-Indika.htm Text] ] and describes the ultimate destruction of the city's walls:: "Then, after having approached together with the s and the s, the Yavanas, valiant in battle, will reach Kusumadhvaja ("The town of the flower-standard", ). Then, once Puspapura (another name of Pataliputra) has been reached and its celebrated mud [-walls] cast down, all the realm will be in disorder." ("Yuga Purana", Paragraph 47-48, 2002 edition.)

Pushyamitra is recorded to have performed two Ashvamedha Yagnas and Sunga imperial inscriptions have extended as far as Jalandhar. Scriptures such as the Divyavadhana note that his rule extended even farther to Sialkot, in the Punjab. Moreover, if it was lost, Mathura was regained by the Sungas around 100 BCE (or by other indigenous rulers: the s (area of Mathura) and s mention military victories on their coins ("Victory of the Arjunayanas", "Victory of the Yaudheyas"), and during the 1st century BCE, the Trigartas, and finally the s also started to mint their own coins). Accounts of battles between the Greeks and the Sunga in Northwestern India are also found in the "", a play by which describes a battle between Greek cavalrymen and Vasumitra, the grandson of , on the Indus river, in which the Indians defeated the Greeks and Pushyamitra successfully completed the Ashvamedha Yagna. ["Indo-Greek, Indo-Scythian and Indo-Parthian coins in the Smithsonian institution", , p16. Also: "Kalidasa recounts in his Mālavikāgnimitra (5.15.14-24) that Puspamitra appointed his grandson Vasumitra to guard his sacrificial horse, which wandered on the right bank of the Sindhu river and was seized by Yavana cavalrymen- the latter being thereafter defeated by Vasumitra. The "Sindhu" referred to in this context may refer the river Indus: but such an extension of Sunga power seems unlikely, and it is more probable that it denotes one of two rivers in central India -either the Sindhu river which is a tributary of the , or the Kali-Sindhu river which is a tributary of the Chambal." The Yuga Purana, Mitchener, 2002.]

Nevertheless, very little can be said with great certainty. However, what does appear clear is that the two realms appeared to have established normalized diplomatic relations in the succeeding reigns of their respective rulers.

While there is much debate on the religious politics of the Sunga dynasty, it is recognized for a number of contributions. Art, education, philosophy, and other learning flowered during this period. Most notably, Patanjali's Yoga Sutras and Mahabhasya were composed in this period. It is also noted for its subsequent mention in the Malavikaagnimitra. This work was composed by Kalidasa in the later Gupta period, and romanticized the love of Malavika and King Agnimitra, with a background of court intrigue.

Artistry on the subcontinent also progressed with the rise of the Mathura school, which is considered the indigenous counterpart to the more Hellenistic Gandhara school of Afghanistan and Pakistan.

During the historical Sunga period (185 to ), Buddhist activity also managed to survive somewhat in central India () as suggested by some architectural expansions that were done at the s of and , originally started under King Ashoka. It remains uncertain whether these works were due to the weakness of the control of the Sungas in these areas, or a sign of tolerance on their part.

The last of the Sunga kings was (83-73 BCE). He was assassinated by his minister (Vasudeva Kanva) and is said to have been overfond of the company of women. The Sunga dynasty was then replaced by the subsequent Kanvas.

The script used by the Sunga was a variant of Brahmi, and was used to write the Sanskrit language. The script is thought to be an intermediary between the and the Kalinga brahmi scripts. [ [http://www.proel.org/alfabetos/sunga.html Source] ]