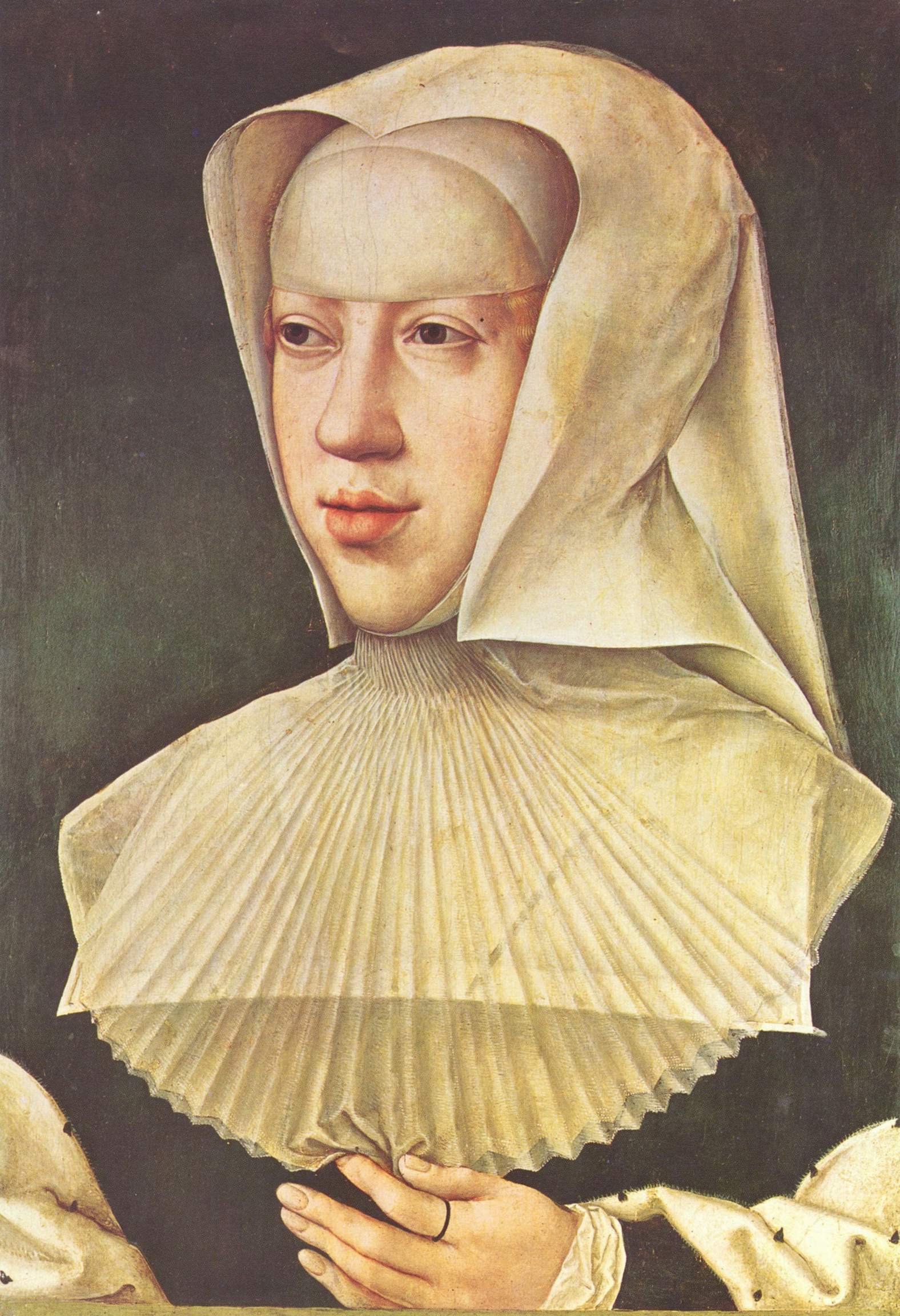 caption =Portrait of Margaret of Austria, dressed as a widow, by
spouse =

The Archduchess Margaret (Margaretha) of Austria ( &ndash; ) was a princess, the daughter of and .

In 1483, she was betrothed to the , later King , bringing with her a dowry of and , and was transferred to the guardianship of King (see ). After Charles renounced the treaty and married , Margaret was returned to her father in 1493.

In 1497, she was married to , of (1478&ndash;1497), the son and heir of King and Queen . The marriage was part of a double alliance, also including her brother marrying Infanta Joan. Juan of Asturias died after only six months. Juan left her pregnant, but she gave birth to a stillborn child. She returned to the Netherlands early in 1500.

She was appointed for the first time as of the (1507&ndash;1515) and guardian of her young nephew Charles (the future ).Margaret acted as intermediary between her father and his subjects in the Netherlands, negotiated a treaty of commerce with favorable to the Flemish cloth interests, and played a role in the formation of the (1508).After his majority in 1515, Charles rebelled against her influence, but he soon recognized her as one of his wisest advisers, and she was again governor of the Netherlands (1519&ndash;30) intermittently until her death. In 1529, together with , she negotiated the Treaty of Cambrai, the so-called "Ladies' Peace".

Her reign was a period of relative peace and prosperity for the Netherlands, although the started to take root, especially in the northern Netherlands. The first Protestant martyrs were burnt at the stake in 1524 and 1525. She had some difficulty in keeping Duke Charles of Guelders under control. She could make him sign the in 1528, but the problem was not finally dealt with during her reign.

Patroness of the Arts

Margaret had received a fine education. She played serval instruments, was well read and wrote poetry. Her court at was visited by the great humanists of her time, including [Triest, Monica (2000). "Macht, vrouwen en politiek 1477-1558. Maria van Bourgondië, Margaretha van Oostenrijk, Maria van Hongarije". Leuven, Van Halewijck.] . She possessed a rich library, consisting mostly of s, historical and ethical treatises (among which the works of ) and poetry. It included the famous illuminated [Schreurs, Eugeen; Vendrix; Philippe (2005). "The sweet melancholy of Margaret", translated by Celia Skrine, 11. CD Booklet MEW 0525. ] . She ordered several splendid music manuscripts from [Kellman, Herbert (ed.) (1999). The Treasury of Petrus Alamire. Music and Art in Flemish Court Manustricpts 1500-1535. Leuven, Die Keure.] to send them as gifts to members and her family and to her political relations, and possessed several "Chansonniers" herself [Schreurs, Eugeen (1998). "Margarete – Maximilian I", translated by Stratton Bull, 14. CD Booklet ORF CD 265. ] . They contained works by , , and , who was her favourite composer.

She died at , between and , her main place of residence in the Netherlands, after appointing her nephew, Charles V, as her universal and sole heir. She is buried at , [department of l'Ain, Rhone-Alpes] in the magnificent mausoleum that she ordered for her second husband (Philibert) and her.There is a statue of her next to the cathedral of Mechelen.