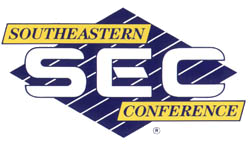 map_size = 275The Southeastern Conference (SEC) is a headquartered in Birmingham, , which operates in the southeastern part of the . It participates in the NCAA's Division I in athletic competitions; for football, it is part of the Division I Football Bowl Subdivision (FBS; formerly Division I-A), where it is commonly regarded as the strongest conference in the country. [ [http://sportsillustrated.cnn.com/2007/writers/bill_trocchi/12/12/conference.rankings/index.html SI.com - Writers - Bill Trocchi: Mighty SEC holds down top spot prior to bowl season - Thursday December 13, 2007 8:07PM ] ] The conference is one of the most successful both on the field and financially, averaging more than six national championships per year since 1990 and consistently leading all conferences in revenue distribution to its members including a record $127.2 million for the 2007-2008 fiscal year.

The SEC was established in December 1932, when the 13 members of the located west and south of the
left to form their own conference. [ [http://www.onlineseats.com/college-basketball-tickets/sec-tournament/index.asp Sec Tournament Tickets College Basketball Ticket - Buy Cheap Sec Tournament Tickets ] ] [ [http://www.geocities.com/nolefan_fsu/summary/fsu_sec.html FSU and the SEC ] ] Ten of the thirteen charter members have remained in the conference since its inception: the , , , , , , , , , and .

In 1992, the SEC adopted the divisional setup that exists today. Also in 1992, the SEC was the first conference to receive permission from the NCAA to conduct an annual championship game in football, featuring the winners of the conference's Eastern and Western divisions.

During the 2007-2008 fiscal year review meeting, there was discussion among SEC leadership about the possibility of starting a dedicated to its conference, much in the same way the has done with the . A decision was made to postpone the decision until at least the following year. [ [http://www.tidesports.com/article/20080531/NEWS/733342667/1011/news&tc=yahoo SEC considering starting own TV network | TideSports.com ] ]

In August 2008 the SEC announced an unprecedented 15-year television contract with CBS worth an estimated $55 million a year. This will continue the relationship the SEC already has with CBS, which puts the SEC in the unique position as the only conference to have its own exclusive national television network of the big three networks (CBS,NBC,and ABC) to display the SEC's events.

The office of Commissioner was created in 1940 [ [http://www.secsports.com/index.php?s=&url_channel_id=22&url_article_id=9250&change_well_id=2 Stories of Character :: Celebrating 75 Years ] ]
*One men's home game per year played at in Louisville.
*New stadium scheduled to open for 2009 season.
*Two games played each year at Little Rock, one non-conference game and one SEC game.
*New arena scheduled to open for 2010-11 season.
*New Alex Box Stadium scheduled to open for 2009 season.
*Though Mississippi State's Dudy Noble Field official seating capacity is 7,200, its total capacity is 15,500, which includes privately owned seating in . Mississippi State holds the all-time NCAA on-campus record for one day attendance at 14,991. [ [http://msuinfo.ur.msstate.edu/alumnus/fall.99/25attendance.htm Mississippi State Alumnus:Fall 1999 ] ]

Before expansion, each SEC school played 6 conference games. Five of these games were against permanent opponents, developing some traditional rivalries between schools, and the 6th game rotated around the other 4 members of the conference.

From through , each team had two permanent inter-divisional opponents, allowing many traditional rivalries from the pre-expansion era (such as Florida vs. Auburn, Kentucky vs. LSU and Vanderbilt vs. Alabama) to continue. However, complaints from some league athletic directors about imbalance in the schedule (for instance, Auburn's two permanent opponents from the East were Florida and Georgia &ndash; two of the SEC's stronger football programs at the time &ndash; while Mississippi State played relatively weaker Kentucky and South Carolina every year) led to the SEC reducing the permanent opponents to only one per team.

Under the current format, each school plays a total of eight conference games, consisting of the other five teams in its division, two schools from the other division on a rotating basis, and one school from the other division that it plays each year. All permanent inter-divisional games, with the exception of Arkansas vs. South Carolina, were played annually before SEC expansion in 1992. [ [http://www.secsports.com/index.php?s=&change_well_id=2&url_article_id=317 www.secsports.com - SEC Football Scheduling Format ] ] The following table shows the permanent opponent for each school listed by total number of games played (records through 2007 with western wins listed first)

Since its founding in 1932, and the first full academic year of competition in 1933, SEC members have won a total of 161 team national championships.

The "Southeastern Conference" sponsors eight men's sports and ten women's sports, and awards a conference championship in every one of them.

An SEC school, , has been chosen to host the first United States Presidential Election debate of 2008, to be held , 2008. This is also the first ever presidential debate to be held at an SEC school. [ [http://debate.olemiss.edu 2008 Presidential Debate | The University of Mississippi - Official Home Page ] ]