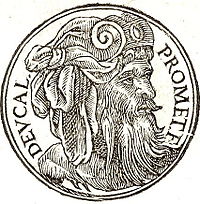 In Greek mythology Deucalion (pronounced /djuːˈkeɪliən/; Ancient Greek: Δευκαλίων) was a son of Prometheus and Pronoia. The anger of Zeus was ignited by the hubris of the Pelasgians, and he decided to put an end to the Bronze Age. Lycaon, the king of Arcadia, had sacrificed a boy to Zeus, who was appalled by this savage offering. Zeus loosed a deluge, so that the rivers ran in torrents and the sea flooded the coastal plain, engulfed the foothills with spray, and washed everything clean. Deucalion, with the aid of his father Prometheus, was saved from this deluge by building a chest. Like his Biblical equivalent Noah and Mesopotamian counterpart Utnapishtim, he uses his chest to save himself and his wife, Pyrrha.

Deucalion is parallel to Biblical Noah and to Utnapishtim, the survivor of the Sumerian flood that is told in the Epic of Gilgamesh.[1][2] Deucalion's name comes from δεύκος déucos, a variant of γλεύκος, "sweet new wine, must, sweetness"[3] + ἁλιεύς haliéus "sailor, seaman, fisher".[4] His wife Pyrrha's name is derived from the adjective πυρρός, -ά, -όν pyrrós, -á, -ón, meaning "flaming (figuratively, never with actual fire)" or "flame-colored, orange". 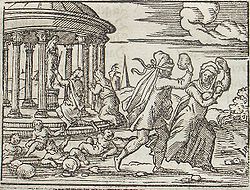 Deucalion and Pyrrha from a 1562 version of Ovid's Metamorphoses.

Of Deucalion's birth, the Argonautica (from 3rd century BC) states:

"There [in Achaea, i.e. Greece] is a land encircled by lofty mountains, rich in sheep and in pasture, where Prometheus, son of Iapetus, begat goodly Deucalion, who first founded cities and reared temples to the immortal gods, and first ruled over men. This land the neighbours who dwell around call Haemonia [i.e. Thessaly]."

The fullest accounts are provided in Ovid's Metamorphoses (8 AD) and in the Library of Pseudo-Apollodorus.[5] Deucalion, who reigned over the region of Phthia, had been forewarned of the flood by his father, Prometheus. Deucalion was to build a chest and provision it carefully (no animals are rescued in this version of the Flood myth), so that when the waters receded after nine days, he and his wife Pyrrha, daughter of Epimetheus, were the one surviving pair of humans. Their chest touched solid ground on Mount Parnassus,[6] or Mount Etna in Sicily,[7] or Mount Athos in Chalkidiki,[8] or Mount Othrys in Thessaly.[9]

Hyginus mentions the opinion of a Hegesianax that Deucalion is to be identified with Aquarius, "because during his reign such quantities of water poured from the sky that the great Flood resulted."

Once the deluge was over and the couple had given thanks to Zeus, Deucalion (said in several of the sources to have been aged 82 at the time) consulted an oracle of Themis about how to repopulate the earth. He was told to cover your head and throw the bones of your mother behind your shoulder. Deucalion and Pyrrha understood that "mother" is Gaia, the mother of all living things, and the "bones" to be rocks. They threw the rocks behind their shoulders and the stones formed people. Pyrrha's became women; Deucalion's became men.

Deucalion and Pyrrha had at least two children, Hellen and Protogenea, and possibly a third, Amphictyon (who is Autochthonous in other traditions).

Their children as apparently named in one of the oldest texts, Catalogue of Women, include daughters Pandora and Thyia, and sons Hellen and Idomeneus. Their descendants were said to have dwelt in Thessaly. One fragment agrees with later accounts in making Deucalion the son of Prometheus and Pronoea; another, the son of Minos.

On the other hand, Dionysius of Halicarnassus gives Deucalion's parentage as Prometheus and Clymene, daughter of Oceanus, and mentions nothing about a flood, but instead names him as commander of those from Parnassus who drove the "sixth generation" of Pelasgians from Thessaly.

One of the earliest Greek historians, Hecataeus of Miletus, was said to have written a book about Deucalion, but it no longer survives. The only extant fragment of his to mention Deucalion does not mention the flood either, but names him as the father of Orestheus, king of Aetolia. The much later geographer Pausanias, following on this tradition, names Deucalion as a king of Ozolian Locris and father of Orestheus. Plutarch mentions a legend that Deucalion and Pyrrha had settled in Dodona, Epirus; while Strabo asserts that they lived at Cynus, and that her grave is still to be found there, while his may be seen at Athens; he also mentions a pair of Aegean islands named after the couple.

The 2nd century writer Lucian gave an account of the Greek Deucalion in De Dea Syria that seems to refer more to the Near Eastern flood legends: in his version, Deucalion (whom he also calls Sisythus)[10] took his children, their wives, and pairs of animals with him on the ark, and later built a great temple in Manbij (northern Syria), on the site of the chasm that received all the waters; he further describes how pilgrims brought vessels of sea water to this place twice a year, from as far as Arabia and Mesopotamia, to commemorate this event.

John Lemprière, in Bibliotheca Classica, notes that as the story was re-told in later versions it accumulated details from the stories of Noah and Moses: "Thus Apollodorus gives Deucalion a great chest as a means of safety; Plutarch speaks of the pigeons by which he sought to find out whether the waters had retired; and Lucian of the animals of every kind which he had taken with him &c."[11]

Deucalion's flood may be dated in the chronology of Saint Jerome to ca. 1460 BC.

According to Augustine of Hippo (City of God XVIII,8,10,&11) Deucalion & his father Prometheus were contemporaries of Moses.

According to Clement of Alexandria in his Stromata, "...in the time of Crotopus occurred the burning of Phaethon, and the deluges of Deucalion."

The descendants of Deucalion and Pyrrha are below:

[13] In the Chronicles of the Imaginarium Geographica series by James A. Owen, Deucalion is an ancient shipbuilder who taught animals to walk and talk. He has many sons, including Sobek, Hor, and Amun, and built dragonships. He is also called Thoth and Ordo Maas, and the ancestor of Odysseus, Merlin, and King Arthur.