In Greek mythology, a Charis (Ancient Greek: Χάρις, pronounced [kʰáris]) is one of several Charites

/ˈkærɨtiːz/ (Χάριτες, [kʰáritɛːs]; Greek: "Graces"), goddesses of charm, beauty, nature, human creativity and fertility. They ordinarily numbered three, from youngest to oldest: Aglaea ("Splendor"), Euphrosyne ("Mirth"), and Thalia ("Good Cheer"). In Roman mythology they were known as the Gratiae, the "Graces". In some variants Charis was one of the Graces and was not the singular form of their name.

The Charites were usually considered the daughters of Zeus and Eurynome, though they were also said to be daughters of Dionysus and Aphrodite or of Helios and the naiad Aegle. Other possible names of their mother by Zeus are Eurydome, Eurymedousa, and Euanthe.[1] Homer wrote that they were part of the retinue of Aphrodite. The Charites were also associated with the Greek underworld and the Eleusinian Mysteries.

The river Cephissus near Delphi was sacred to them. 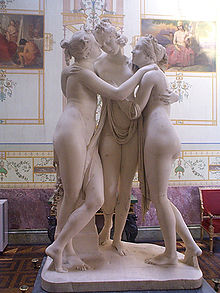 The Three Graces by Antonio Canova

Although the Graces usually numbered three, according to the Spartans, Cleta, not Thalia, was the third, and other Graces are sometimes mentioned, including Auxo, Charis, Hegemone, Phaenna, and Pasithea. An ancient vase painting attests the following names: Antheia, Eudaimonia, Paidia, Pandaisia, Pannychis - all referring to the Charites as patronesses of amusement and festivities.

Pausanias interrupts his Description of Greece (book 9.xxxv.1–7) to expand upon the various conceptions of the Graces that had developed in different parts of mainland Greece and Ionia:

"The Boeotians say that Eteocles was the first man to sacrifice to the Graces. Moreover, they are aware that he established three as the number of the Graces, but they have no tradition of the names he gave them. The Lacedaemonians, however, say that the Graces are two, and that they were instituted by Lacedaemon, son of Taygete, who gave them the names of Cleta and Phaenna. These are appropriate names for Graces, as are those given by the Athenians, who from of old have worshipped two Graces, Auxo and Hegemone... It was from Eteocles of Orchomenus that we learned the custom of praying to three Graces. And Angelion and Tectaus, sons of Dionysus, who made the image of Apollo for the Delians, set three Graces in his hand. Again, at Athens, before the entrance to the Acropolis, the Graces are three in number; by their side are celebrated mysteries which must not be divulged to the many. Pamphos (Πάμφως or Πάμφος) was the first we know of to sing about the Graces, but his poetry contains no information either as to their number or about their names. Homer (he too refers to the Graces ) makes one the wife of Hephaestus, giving her the name of Grace. He also says that Sleep was a lover of Pasithea, and in the speech of Sleep there is this verse:--

Verily that he would give me one of the younger Graces.

"Hence some have suspected that Homer knew of older Graces as well. Hesiod in the Theogony (though the authorship is doubtful, this poem is good evidence) says that the Graces are daughters of Zeus and Eurynome, giving them the names of Euphrosyne, Aglaia and Thalia. The poem of Onomacritus agrees with this account. Antimachus, while giving neither the number of the Graces nor their names, says that they are daughters of Aegle and the Sun. The elegiac poet Hermesianax disagrees with his predecessors in that he makes Persuasion also one of the Graces."[2] 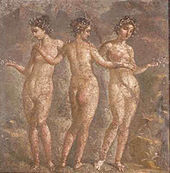 The Graces in a 1st century fresco at Pompeii

On the representation of the Graces, Pausanias wrote,

"Who it was who first represented the Graces naked, whether in sculpture or in painting, I could not discover. During the earlier period, certainly, sculptors and painters alike represented them draped. At Smyrna, for instance, in the sanctuary of the Nemeses, above the images have been dedicated Graces of gold, the work of Bupalus; and in the Music Hall in the same city there is a portrait of a Grace, painted by Apelles. At Pergamus likewise, in the chamber of Attalus, are other images of Graces made by Bupalus; and near what is called the Pythium there is a portrait of Graces, painted by Pythagoras the Parian. Socrates too, son of Sophroniscus, made images of Graces for the Athenians, which are before the entrance to the Acropolis. Also, Socrates was know to have destroyed his own work as he progressed deeper into his life of philosophy and search of the conscious due to his iconoclastic attitude towards art and the like. All these are alike draped; but later artists, I do not know the reason, have changed the way of portraying them. Certainly to-day sculptors and painters represent Graces naked." 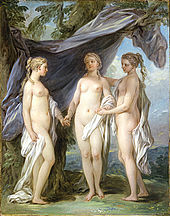 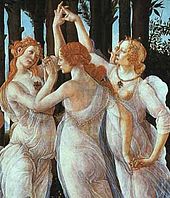 The Three Graces, from Sandro Botticelli's painting Primavera in the Uffizi Gallery. 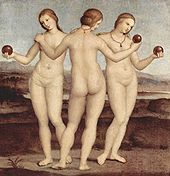 During the Renaissance, the Roman statue group of the three graces in the Piccolomini library in Duomo di Siena inspired most themes.

The Charites are depicted together with several other mythological figures in Sandro Botticelli's painting Primavera (above right). Raphael also pictured them in a painting now housed in Chantilly in France. Among other artistic depictions, they are the subject of famous sculptures by Antonio Canova and Bertel Thorvaldsen.

A group of three trees in the Calaveras Big Trees State Park are named "The Three Graces" after the Charites.[3]

(The Imagebase links are all broken)