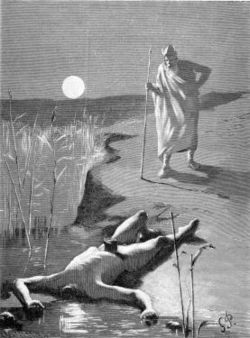 Mímir (Old Norse "The rememberer, the wise one"[1]) or Mim is a figure in Norse mythology renowned for his knowledge and wisdom who is beheaded during the Æsir-Vanir War. Afterward, the god Odin carries around Mímir's head and it recites secret knowledge and counsel to him.

Mímir is mentioned in the Poetic Edda poems Völuspá and Sigrdrífumál. In Völuspá, Mímir is mentioned in two stanzas. Stanza 28 references Odin's sacrifice of his eye to Mímir's Well, and states that Mímir drinks mead every morning "from the Father of the Slain's [Odin] wager."[2] Stanza 46 describes that, in reference to Ragnarök, the "sons" of Mím are at play while "fate burns" (though no further information about these "sons" has survived[3]), that the god Heimdallr blows the Gjallarhorn, and that Mímir's decapitated head gives counsel to Odin. The single mention in stanza 14 of Sigrdrífumál is also a reference to Mímir's speaking, decollated head. Stanzas 20 and 24 of the poem Fjölsvinnsmál refer to Yggdrasil as Mímameiðr.

In chapter 15 of the Prose Edda book Gylfaginning, as owner of his namesake well, Mímir himself drinks from it and gains great knowledge. To drink from the well, he uses the Gjallarhorn, a drinking horn which shares its name with the sounding horn used by Heimdallr intended to announce the onset of Ragnarök. The section further relates that the well is located beneath one of the three roots of Yggdrasil, in the realm of the frost jötunn.

Chapter 51 relates that, with the onset of Ragnarök, "Heimdall stands up and blows the Gjallarhorn with all his strength. He wakens all the gods who then hold an assembly. Odin now rides to Mimir's Well, seeking council for both himself and his followers. The ash Yggdrasil shakes, and nothing, whether in heaven or on earth, is without fear."[4]

In the Prose Edda book Skáldskaparmál, Mímir's name appears in various kennings. These kennings include "Mím's friend" (for "Odin") in three places, "mischief-Mímir" (a kenning for "jötunn"[5]), and among a list of names for jötunn.[6]

Mímir is mentioned in chapters 4 and 7 of the saga Ynglinga Saga, as collected in Heimskringla. In chapter 4, Snorri presents a euhemerized account of the Æsir-Vanir War. Snorri states that the two sides eventually tired of the war and both agree to meet to establish a truce. The two sides meet and exchanged hostages. Vanaheimr are described as having sent to Asgard their best men: Njörðr—described as wealthy—and his son Freyr in exchange for Asaland's Hœnir—described here as large, handsome, and thought of by the people of Vanaheimr well suited to be a chieftain. Additionally, the Æsir send Mímir—described as a man of great understanding—in exchange for Kvasir, who Snorri describes as the wisest man of Vanaheimr.[7]

Snorri continues that, upon arrival in Vanaheimr, Hœnir was immediately made chief and Mímir often gave him good counsel. However, when Hœnir was at meetings and at the Thing without Mímir by his side, he would always answer the same way: "Let others decide."[7] Subsequently, the Vanir suspected they had been cheated in the exchange by the Æsir, so they seized Mimir and beheaded him and sent the head to Asgard. Odin took the head of Mímir, embalmed it with herbs so that it would not rot, and spoke charms over it, which gave it the power to speak to him and reveal to him secrets.[7] The head of Mímir is again mentioned in chapter 7 in connection with Odin, where Odin is described as keeping Mímir's head with him and that it divulged information from other worlds.[8]

On the basis of one stanza in Hávamál - where Odin learns nine magic songs from the unnamed brother of his mother Bestla - some scholars have theorized that Bestla's brother may in fact be Mímir, who is then Odin's maternal uncle. This also means that his father would be Bölþorn.[9]

In the theories of Viktor Rydberg, Mímir's wife is Sinmara. According to Rydberg, the byname Sinmara refers to "Mímir-Niðhad"'s "queen ordering Völund's hamstrings to be cut".[10]