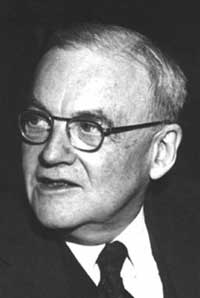 John Foster Dulles (, &ndash; , ) served as U.S. Secretary of State under President from 1953 to 1959. He was a significant figure in the early era, advocating an aggressive stance against around the world. He advocated support of the French in their war against the in Indochina and it is widely believed that he refused to shake the hand of at the Geneva Conference in 1954. He also played a great part in the CIA operations to overthrow the democratic Mossadegh government of Iran in 1953 () and the democratic Arbenz government of Guatemala in 1954 ().

Born in , he was one of five children and the eldest son born to minister Allen Macy Dulles and his wife Edith (Foster). He attended public schools in . After attending and he joined the law firm of , where he specialized in . He tried to join the during but was rejected because of poor eyesight. Instead, Dulles received an Army commission as Major on the War Industries Board.

Both his grandfather and his uncle served as Secretary of State. He was also the older brother of , under Eisenhower. On June 26, 1912, he married Janet Avery, with whom he had two sons and a daughter. One of their sons, , converted to Catholicism, entered the order and became the first American priest to be directly appointed Cardinal. He currently teaches and resides at in , New York. His other son, John W. F. Dulles (1913-2008), was a professor of history at the . [ [http://media.www.dailytexanonline.com/media/storage/paper410/news/2003/06/03/News/90YearOld.Still.Active.At.University-493935.shtml "90-year-old Still Active at University, The Daily Texan"] ]

In 1918, appointed Dulles as legal counsel to the United States delegation to the where he served under his uncle, , then Secretary of State. Dulles made an early impression as a junior diplomat by clearly and forcefully arguing against imposing crushing reparations on Germany. Afterwards, he served as a member of the War Reparations Committee at the request of President Wilson. Dulles, a deeply man, attended numerous international conferences of churchmen during the 1920s and 1930s. In 1924, he was the defense counsel in the church trial of Rev. Harry Emerson Fosdick, who had been charged with heresy by opponents in the denomination, a case settled when Fosdick, a liberal Baptist, resigned his pulpit in the Presbyterian Church, which he had never joined. Dulles also became a partner at , an international law firm. According to 's book "The Moloch" Dulles gave assets of 1 bio. $ to the Nazi party in 1933 after Hitler's election, and according to 's 2006 book "Overthrow", the firm benefited from doing business with the Nazi regime, and throughout 1934, Dulles was a very public supporter of Hitler. However, the junior partners, led by his brother Allen [Grose, Peter. 1994. Gentleman Spy, The Life of Allen Dulles. Houton Mifflin. New York.ISBN 0-395-51607-2, were appalled by Nazi activities and threatened to revolt if Dulles did not end the firm's association with the regime. In 1935, Dulles closed 's Berlin office; later he would cite the closing date as 1934, no doubt in an effort to clear his reputation by shortening his involvement with Nazi Germany. [Kinzer, Stephen, "Overthrow." Henry Holt and Company (2006), p. 114, ISBN 0-8050-8240-9]

Dulles was a close associate of , who became the candidate of the in the 1944 election and 1948. During the s Dulles served as Dewey's chief foreign policy adviser. In 1944 as Dewey's adviser Dulles took an active role in establishing the Republican plank calling for the establishment of a Jewish commonwealth in Palestine. [Isaac Alteras 1993 "Eisenhower and Israel: U.S.-Israeli Relations, 1953-1960" University Press of Florida ISBN 0813012058 pp 53-55]

In 1945, Dulles participated in the and worked as adviser to and helped draft the preamble to the . He subsequently attended the as a United States delegate in 1946, 1947 and 1950. Dulles was appointed to the as a Republican from New York on , , to fill the vacancy caused by the resignation of Democrat . Dulles served from , , to , , when a successor, , was elected, having beaten Dulles in a special election to fill the senate vacancy.

In 1950, Dulles published "War or Peace", a critical analysis of the American policy of , which at the time was favored by many of the foreign policy elites in Washington. Dulles criticized the foreign policy of . He argued that containment should be replaced by a policy of "liberation". When became President in January, 1953, he appointed Dulles as his Secretary of State. As Secretary of State, Dulles still carried out the “containment” policy of neutralizing the during the , which had been established by President Truman in the of 1951.

As Secretary of State, Dulles spent considerable time building up as part of his strategy of controlling expansion by threatening in event of a , as well as building up friendships, including that of Louis Jefferson, who would later write a good-humored biography on Dulles. In 1950, he helped instigate the Treaty for mutual protection with and . One of his first major policy shifts towards a more aggressive posture against communism, Dulles directed the at this point now under the directorship of John Foster Dulles' brother , in March 1953, to draft plans to overthrow the in [http://www.gwu.edu/~nsarchiv/NSAEBB/NSAEBB28/] . This led directly to the via in support of , the .

After the war, the conducted a lengthy inquiry regarding the status of Eritrea, with the superpowers each vying for a stake in the state's future. Britain, the last administrator at the time, put forth the suggestion to partition Eritrea between Sudan and Ethiopia, separating Christians and Muslims. The idea was instantly rejected by Eritrean political parties as well as the UN. [ [http://www.iht.com/articles/2000/06/10/edold.t_11.php 1950:Eritrea's Future : IN OUR PAGES:100, 75 AND 50 YEARS AGO - International Herald Tribune ] ] The United States point of view was expressed by its then chief foreign policy advisor John Foster Dulles who said:

A UN plebiscite voted 46 to 10 to have Eritrea be federated with which was later stipulated on , in resolution 390 (V). Eritrea would have its own and administration and would be represented in what had been the Ethiopian parliament and would become the federal parliament. In 1961 the 30-year Eritrean Struggle for Independence began, following the Ethiopian Emperor 's dissolution of the federation and shutting down of Eritrea's parliament. The Emperor declared Eritrea the fourteenth province of Ethiopia in 1962. [Semere Haile "The Origins and Demise of the Ethiopia-Eritrea Federation" Issue: A Journal of Opinion, Vol. 15, 1987 (1987), pp. 9-17]

Dulles was also the architect of the (SEATO) that was created in 1954. The treaty, signed by representatives of , Britain, , , , the , and the provided for collective action against aggression. In that same year, due to his relationship with his brother Allen Dulles, a member of the Board Of Directors of the , based in Guatemala, Foster Dulles was pivotal in promoting and executing the CIA-led that overthrew the democratically elected Guatemalan government of .

Dulles was one of the pioneers of and . In an article written for Dulles defined his policy of brinkmanship: "The ability to get to the verge without getting into the war is the necessary art." His critics blamed him for damaging relations with Communist states and contributing to the .

Dulles upset the leaders of several non-aligned countries when on , , he argued in one speech that "neutrality has increasingly become an obsolete and, except under very exceptional circumstances, it is an immoral and shortsighted conception."

Dulles provided some consternation and amusement to the British, Canadian, Australian, and New Zealand ambassadors by his repeated attempts to tell substantially different versions of events to them. Apparently, unbeknownst to Dulles, the men had all attended Cambridge together and followed up meetings with Dulles by comparing notes and reporting the discrepancies to their home countries.Fact|date=February 2007

In 1956, Dulles strongly opposed the Anglo-French invasion of the , (October–November 1956). However, by 1958, he was an outspoken opponent of President and stopped him from receiving weapons from the United States. This policy seemingly backfired, enabling the to gain influence in the .

Dulles also served as the Chairman and Co-founder of the Commission on a Just and Durable Peace of the Federal Council of Churches of Christ in America (succeeded by the ), the Chairman of the Board for the , a Trustee of the from 1935 to 1952, and was a founding member of the .

Suffering from , Dulles was forced by his declining health to resign from office in April 1959. He died in Washington, D.C. on , , at the age of 71, and is buried at . He was awarded the and the in 1959.A central Berlin road was (re-)named "John-Foster-Dulles-Allee" in 1959 in presence of Christian Herter, Dulles' successor as Secretary of State.

The (located in ) and John Foster Dulles High, Middle and Elementary School (Sugar Land, ) were all named in honor of Dulles. Watertown, NY named the Dulles State Office Building in his honor.

first rose to prominence in the 1950s singing a novelty song, "I Made a Fool of Myself Over John Foster Dulles"; more recently, commented "John Foster Dulles ain't nothing but the name of an airport now" in the song "B-Movie". In the book "", Switters and Case both spit whenever they refer to John Foster Dulles.Dulles' policy was later implemented by the during the 1980s and it is sometimes credited with the collapse of, the , the in eastern as well as the itself. [Coulter, Ann. 2003. Treason. Crown Forum. New York. pp. 156-157, ISBN 1-4000-5030-8] [cite web
url=http://www.state.gov/r/pa/ho/time/cwr/17601.htm
title=Kennan and Containment, 1947
publisher=U.S. Department of State
accessdate=2008-03-26]

On December 1958, Dulles and Dr. attended 's new president ' inauguration, where Dulles made the candid quote, "The United States of America does not have friends; it has interests". At the time the quote was actually interpreted positively, but has with time become infamous in some sectors due to the country's future foreign policies.