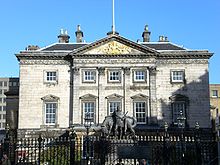 Dundas House, designed by Sir William Chambers and built in 1774 for Sir Lawrence Dundas and acquired by the bank in 1821.[2] Registered Head Office of the Royal Bank of Scotland Group in St Andrew Square, Edinburgh.

The bank traces its origin to the Society of the Subscribed Equivalent Debt which was set up by investors in the failed Company of Scotland to protect the compensation they received as part of the arrangements of the 1707 Acts of Union. The Equivalent Society became the Equivalent Company in 1724, and the new company wished to move into banking. The British government received the request favourably as the "Old Bank", the Bank of Scotland, was suspected of having Jacobite sympathies. Accordingly the "New Bank" was chartered in 1727 as the Royal Bank of Scotland, with Archibald Campbell, Lord Ilay appointed as its first governor.

In 1728, the Royal Bank of Scotland became the first bank in the world to offer an overdraft facility.

Competition with the Bank of Scotland

Competition between the Old and New Banks was fierce and centred on the issue of banknotes. The policy of the Royal Bank was to either drive the Bank of Scotland out of business or take it over on favourable terms.

Despite talk of a merger with the Bank of Scotland, the Royal Bank did not possess the wherewithal to complete the deal. By September 1728, the Bank of Scotland was able to start redeeming its notes again, with interest, and in March 1729, it restarted lending. To prevent similar attacks in the future, the Bank of Scotland put an "option clause" on its notes, giving it the right to make the notes interest-bearing while delaying payment for six months; the Royal Bank followed suit. Both banks eventually decided that the policy they had followed was mutually self-destructive and a truce was arranged, but it still took until 1751 before the two banks agreed to accept each other's notes.

The bank opened its first branch office outside Edinburgh in 1783 when the first Glasgow branch opened. Further branches were opened in Dundee, Rothesay, Dalkeith, Greenock, Port Glasgow and Leith during the early 19th century.

In 1821, the bank moved from its original head office in Edinburgh's Old Town to Dundas House, on St Andrew Square in the New Town. The building as seen along George Street forms the eastern end point of the New Town's central vista. It was designed for Sir Lawrence Dundas by Sir William Chambers as a Palladian mansion, completed in 1774. An axial banking hall (Telling Room) added behind the building, designed by John Dick Peddie, was built in 1857. It features a domed roof, painted blue internally, with gold star-shaped coffers.[2] The banking hall continues in use as a branch of the bank, and Dundas House remains the bank's registered head office to this day.

The rest of the 19th century saw the bank pursue mergers with other Scottish banks, mainly in a response to failing institutions. The assets and liabilities of the Western Bank were acquired following its collapse in 1857 and in 1864 the Dundee Banking Co. was acquired. By 1910, the bank had 158 branches and around 900 staff.

In 1969, the bank merged with the National Commercial Bank of Scotland to become the largest clearing bank in Scotland. 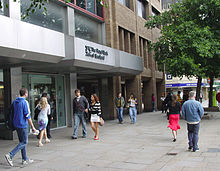 Branch of the Royal Bank of Scotland in Islington, London.

The expansion of the British Empire in the latter half of the 19th century saw the emergence of London as the world's largest financial centre, attracting the Scottish banks to expand south into England. The first London branch of the Royal Bank of Scotland opened in 1874. However, the English banks moved to prevent further expansion by the Scottish banks in England, and after a government committee was set up to examine the matter, the Scottish banks decided to drop their expansion plans. An agreement was reached whereby English banks would not open branches in Scotland; and Scottish banks would not open branches in England outside London. This agreement remained in place until the 1960s, although various cross border acquisitions were permitted.

The Royal Bank's English expansion plans were resurrected after World War I, when it acquired various small English banks, including London based Drummonds Bank in 1924; and Williams Deacon's Bank based in North West England in 1930; and Glyn, Mills & Co. in 1939. The latter two were merged in 1970 to form Williams and Glyn's Bank; and later rebranded as the Royal Bank of Scotland in 1985. Following the financial crisis of 2007–2010, the RBS Group has unveiled plans to resurrect the Williams and Glyn's brand name in preparation for a programme of divestment of its RBS retail banking business in England and its NatWest equivalent in Scotland.[3] However, The Royal Bank subsequently announced plans to sell these branches to Spanish bank Santander. It is anticipated that Santander will integrate the branches under the Santander brand, rather than Williams and Glyn.

On 20 January 2011, RBS were fined £28.58 million for having engaged in anti-competitive practices with Barclays in relation to the pricing of loan products to large professional services firms.[4] 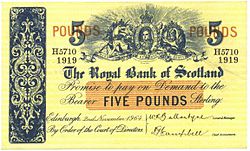 Up until the middle of the 19th century, privately owned banks in Great Britain and Ireland were permitted to issue their own banknotes, and money issued by provincial Scottish,[7] English, Welsh and Irish banking companies circulated freely as a means of payment.[8] While the Bank of England eventually gained a monopoly for issuing banknotes in England and Wales, Scottish banks retained the right to issue their own banknotes and continue to do so to this day. The Royal Bank of Scotland, along with Clydesdale Bank and Bank of Scotland, still prints its own banknotes

Notes issued by Scottish banks circulate widely and may be used as a means of payment throughout Scotland and the rest of the United Kingdom; although they do not have the status of legal tender they are accepted as promissory notes. It should be noted that no paper money is legal tender in Scotland, even that issued by the Bank of England (which is legal tender in England and Wales).

A £100 Royal Bank of Scotland note of the Ilay series 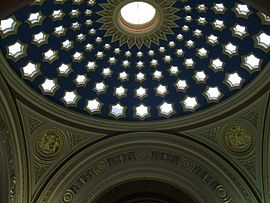 The current series of Royal Bank of Scotland notes was originally issued in 1987. On the front of each note is a picture of Lord Ilay (1682–1761), the first governor of the bank. The image is based on a portrait of Lord Ilay painted in 1744 by the Edinburgh artist Allan Ramsay.[9]

The front of the notes also include an engraving of the facade of Sir Laurence Dundas's mansion in St. Andrew Square, Edinburgh, which was built by Sir William Chambers in 1774 and later became the bank's headquarters, the bank's coat of arms and the 1969 arrows logo and branding. The background graphic on both sides of the notes is a radial star design which is based on the ornate ceiling of the banking hall in the old headquarters building, designed by John Dick Peddie in 1857.[10][11]

On the back of the notes are images of Scottish castles, with a different castle for each denomination:[10]

Current issue in circulation are:

Occasionally the Royal Bank of Scotland issues special commemorative banknotes to mark particular occasions or to celebrate famous people. The Royal Bank was the first British bank to print commemorative banknotes in 1992, and followed with several subsequent special issues. These notes are much sought-after by collectors and they rarely remain long in circulation. Examples to date have included:[12][13]

RBS branding on a branch in Jersey

The RBS Group uses branding developed for the Bank on its merger with the National Commercial Bank of Scotland in 1969.[14] The Group's logo takes the form of an abstract symbol of four inward-pointing arrows known as the "Daisy Wheel" and is based on an arrangement of 36 piles of coins in a 6 by 6 square,[14] representing the accumulation and concentration of wealth by the Group.[14] The Daisy Wheel logo was later adopted by RBS subsidiaries Worldpay, Ulster Bank in Ireland and Citizens Financial Group in the United States.

Since 2006, the brand has moved away from referring to both the Group brand and its retail banking brand as the "Royal Bank of Scotland", instead using the "RBS" initialism. This is intended to support the positioning of the bank as a Global financial services player as opposed to its roots as a national bank. An example of the current branding can be found in the Six Nations Championship in rugby union, which it sponsors as the RBS 6 Nations. However, "Royal Bank of Scotland" is still used alongside the RBS initialism, with both appearing on bank signage.