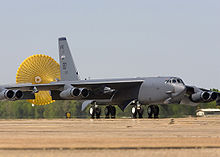 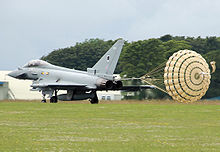 A drogue parachute is a parachute designed to be deployed from a rapidly moving object in order to slow the object, or to provide control and stability, or as a pilot parachute to deploy a larger parachute. It was invented by Giovanni Agusta in 1911.

The drogue parachute's simpler design allows for easier deployment. Where a conventional parachute could get caught in itself while unfolding and fail to inflate properly (thus not slowing the falling object as much as it should), the drogue parachute will inflate more easily and more reliably to generate the expected amount of drag.

The drogue parachute was applied for the first time in 1912 by a Russian inventor Gleb Kotelnikov, the same man who had introduced the knapsack parachute a year before. On a road near Tsarskoye Selo (now part of St. Petersburg) Kotelnikov successfully demonstrated the braking effects of parachute by accelerating a Russo-Balt automobile to the top speed, and then opening a parachute attached to the back seat.[2]

In aviation, drag chutes were used for the first time in 1937 by the Soviet airplanes in the Arctic that were providing support for the famous polar expeditions of the era, such as the first manned drifting ice station North Pole-1, launched the same year. The drag chute allowed airplanes to land safely on the ice-floes of smaller size.[2] 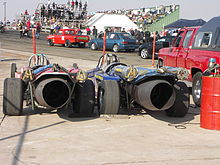 When used as a method of decreasing the landing distance of an aircraft below that available solely from the aircraft's brakes, the device is called a drag parachute or braking parachute.

Drogue parachutes may also be used to help stabilize direction of something in flight, such as a thrown RKG-3 anti-tank grenade. It is often used to gain control of very fast descents, including those of spacecraft during atmospheric reentry, or nuclear bombs such as the B61 and B83.