Craig John McDermott (born 14 April 1965, in Ipswich, Queensland, Australia where he attended the Ipswich Grammar School) is a former Australian cricketer. He is currently the bowling coach for the Australian cricket team.

He was the spearhead of the Australian attack in the late 1980s and early 1990s. Red-haired, powerfully built at 191 cm, he was a sight to watch at full flight with his face painted with a horizontal line of white sun-screen across his nose and cheeks like Allan Donald of South Africa.

He started his career with Queensland in 1983–84 and made his Test match debut for Australia in 1984–85 whilst still 19 v West Indies (his youth engendering his nickname "Billy" – from Billy the Kid). In his first Ashes tour of 1985, he took 30 wickets. But he was over-bowled and was burnt out. He had an excellent World Cup in 1987, helping Australia win the trophy. He took 18 wickets in the tournament, including 5/44 in the semi-final win over Pakistan.

McDermott was a rhythm bowler. When his rhythm was right, he would have an aggressive approach to the wicket and an excellent sideways-on action, giving him sharp pace and outswing. But when his rhythm deserted him, he could look ordinary. He always saved his best for England, taking 32 wickets in the last full series that he was able to play before injuries took over. Injuries seemed to hit him at wrong times, and he missed the history making West Indies tour of 1995 and the 1996 World Cup. He also missed most of the 1993 Ashes tour when Shane Warne and Merv Hughes shared the spoils in his absence.

In batting, even though his average is that of a tail-ender, he could still hit the ball with power and could stand his ground against fast bowling. In fact, two of the closest Tests that Australia lost, McDermott played a key role – In 1993, Australia lost the pivotal closest match in Test history by 1 run to West Indies when McDermott, on 18 and batting with stout resistance, was given out controversially when attempting to play a bouncer from Courtney Walsh. In 1994, he was on 29 not out in the Test against South Africa that Australia lost by 5 runs in chasing 117.

His son, Alister McDermott is a cricketer for Queensland.

On 12 May 2011, it was announced that McDermott had been appointed the new bowling coach for the Australian cricket team replacing Troy Cooley.[1]

In September 2006, McDermott was caught up in a sex-tape extortion case where he was blackmailed for $65,000 by 38-year-old former employee Peter Josef Vigan in exchange for two sexually explicit videos of McDermott with his wife.

Vigan was charged by Queensland Police with eight counts of extortion and one count each of burglary and theft in relation to the earlier theft of the tapes from McDermott's luxury cruiser. He was released on bail at Southport Magistrates court and has been ordered to report to police three times a week and was due to reappear in court in December 2006.[2] Both of the tapes and $30,000 of the money have been since recovered by police; Vigan spent the remainder of the money on the drug ice.

On 23 January 2009, Vigan pleaded guilty to the charges in Southport District Court; Judge Julie Dick sentenced him to 4½ years imprisonment with a non-parole period of 18 months, also ordering him to pay McDermott restitution of $35,000.[3] 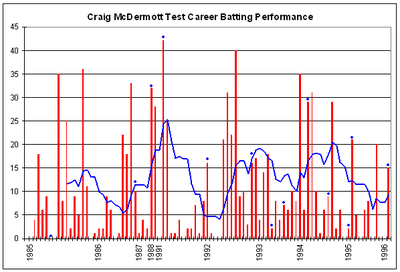 In September, it was revealed McDermott's second wife intended to sue him for allegedly refusing to pay child support.[7]

Cricket legend Allan Border and Brisbane Broncos identity Barry Maranta, along with Rod Petricevic of Bridgecorp, have all been associated with McDermott either as directors of Maxen or directors of other entities related to Maxen & its projects at Bagara Beach Estate near Bundaberg and Fraser Waters at Hervey Bay.[8]

Craig McDermott drives a black Porsche Carrera and lives in a luxury 1092 cubic metre Gold Coast waterfront home which McDermott described as "might be a bit squashy".[9] The property, understood to be owned by McDermott's third wife Ann-Maree, is currently for sale for offers over $10,000,000.[10]