The NZR TR class is a class of diesel shunting locomotives built by many different manufacturers. Many of these locomotives have been withdrawn, but some are still in service. The first locomotives of this class were built by the Drewry Car Co in 1936, and had 52 kW or 90 kW petrol engines. The most powerful were Japanese-built Hitachi TRs, with 138 kW Cummins engines.

W. G. Bagnall built seven TRs in 1956-57. The first five were supplied with McLaren M6 engines, the last two with Gardner 6L3 engines, all with a Self-Changing Gears 4-speed gearbox. The McLaren engines were unsuccessful, so from 1973 TR 150-154 were re-engined with the Gardner 6LX with Twin Disc torque converters. These TRs were the heaviest and one of the more powerful types. 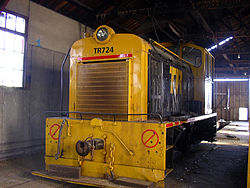 Hitachi received an order for six TRs, 177-182, at a time when NZR was turning away from traditional English suppliers and purchasing an increased number of vehicles from Asia. The locomotives were equipped with a Cummins 6-cylinder engine developing 138 kW (185 hp) and Niigata torque converter, making them the most powerful TRs.

The last TRs were manufactured by NZR at their Hillside workshops. Up to two were completed each year between 1973 and 1978 (TR 183-191). The design is an unusual (for a TR) centre-cab style with a single Gardner 6LX engine and Rolls Royce torque converter. Standard parts such as DSC class windows were utilised in these TRs.

The typical role of a TR was at small stations where a normal shunting locomotive was not needed due to light traffic. NZR's operating rules allowed TRs to be driven by staff who were not members of the locomotive branch, saving on wages. Other roles have included railway workshops and depots, and most of the remaining locomotives can still be found at these locations. There are very few stations where they are still in use owing to rationalisations of freight terminals, the trend towards containerisation of traffic, and roving shunting services. A number of locomotives have been leased to industrial operators for private siding use.

The last TR was built in 1978, TR 191. The greatly reduced needs of NZR and its successors for this type of locomotive, and industrial requirements being able to be handled by other ex-NZR classes or locos obtained from elsewhere, has meant no TRs have been added since then. However four locomotives have been reclassified from other types.

The TR classification has been applied to two former industrial locomotives. One of these is TR 81, which was purchased from the Ohai Railway Board in 1955. Built by the Drewry Car Co in the 1930s, it is similar to the first generation 0-4-0 Drewry TRs, but was originally fitted with the Gardner 6LW diesel engine. The other is A&G Price no. 222 which was acquired from Pacific Metal Industries in the early 2000s. It was built in 1968 with a 307 hp diesel engine and is of the 0-6-0 wheel arrangement. Originally reclassified DSA 222 it now carries the number TR 1026 and is leased for industrial use.

In the 1990s, EB 26 at Napier was reclassified as TR 1003 and used in the area for shunting work. The EB class were formerly workshops shunting locomotives. The Plains Vintage Railway of Ashburton, a heritage railway, also reclassified a former industrial locomotive as a TR. Although A & G Price built similar locomotives for NZR, this locomotive was never owned by NZR or its successors and thus its TR classification and number are historically fictitious.