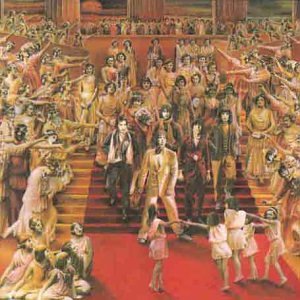 "It's Only Rock 'n' Roll" is an album by , released in 1974. It would be the last Rolling Stones album for guitarist and the songwriting and recording of the album's title track would have a connection to Taylor's eventual replacement, . The album has a more firm rock sound than their previous album, the more funk and soul-inspired "". The album reached number one on the charts and number two in the .

Work would begin on "It's Only Rock 'n' Roll" following The Rolling Stones' fall 1973 European tour. Production would begin in November at , 's . According to guitarist , "We were really hot (off the road) and ready just to play some new material."

The album was at first developed as a half-live, half-studio production with one side of the album featuring live performances from The Stones' European tour while the other side would be composed of newly recorded cover versions of the band's favorite songs. Covers recorded included a take of 's "", 's "Shame, Shame, Shame", and ' "". Soon the band began working off riffs by Richards and new ideas by and the original concept was scrapped in favor of an album with all new material. The cover of "Ain't Too Proud to Beg" would be the only recording to make the cut, while the "Drift Away" cover is a popular bootleg.

"It's Only Rock 'n' Roll" would mark The Stones' first effort in the producer's chair since "", and the first for Jagger and Richards under their pseudonym "". On the choice to produce, Richards said at the time, "I think we'd come to a point with Jimmy (Miller) where the contribution level had dropped because it'd got to be a habit, a way of life, for Jimmy to do one Stones album a year. He'd got over the initial sort of excitement which you can feel on "" and "". Also, Mick and I felt that we wanted to try and do it ourselves because we really felt we knew much more about techniques and recording and had our own ideas of how we wanted things to go. "Goats Head Soup" hadn't turned out as we wanted to - not blaming Jimmy or anything like that... But it was obvious that it was time for a change in that particular part of the process of making records." Starting with this release, all future Rolling Stones albums would either be produced by them or in collaboration with an outside producer.

Most of the album's backing tracks were recorded first at Musicland, with Jagger's vocals recorded after, with Richards saying, " [Jagger] often comes up with his best stuff alone in the studio with just an engineer.".

"Luxury" would show the band's growing interest in music while "" and "If You Really Want to Be My Friend" would continue the band's immersion into s. Seven of the album's ten songs crack the four minute mark, a quality that would come to be disparaged during the rising scene of the late 1970s.

, a longtime acquaintance of the band, began to get closer to The Rolling Stones during these sessions after he invited to play on his debut album, "". Taylor spent some time recording and hanging out at Wood's house The Wick. By chance Richards was asked one night by Wood's wife at the time, Krissy, to join them at the guitarist's home. While there Richards recorded some tracks with Wood and quickly developed a close friendship, with Richards going as far as moving into Wood's guest room. Jagger soon entered the mix and it was here that the album's lead single and title track, "", was first recorded. Wood worked closely on the track with Jagger, who subsequently took the song and title for their album. The released version of the song "It's Only Rock 'n' Roll (But I like it)" features Wood on 12-string acoustic guitar.

"It's Only Rock 'n' Roll" would be Mick Taylor's last album with The Rolling Stones, playing on just seven of the ten tracks. Taylor reportedly had made contributions to the songs like "Till the Next Goodbye" and "Time Waits for No One" but on the album jacket, all original songs were credited to Jagger/Richards. Taylor said in 1997, "I did have a falling out with Mick Jagger over some songs I felt I should have been credited with co-writing on "It's Only Rock 'n' Roll". We were quite close friends and co-operated quite closely on getting that album made. By that time Mick and Keith weren't really working together as a team so I'd spend a lot of time in the studio.". Jagger stated in a 1995 interview about "Time Waits for No One" that Taylor "may threw in a couple of chords".

Alongside the usual outside contributors, namely , , and unofficial member Ian Stewart, would act as percussionist for the album. Several songs were finished songs and overdubs and the mixing were performed at Jagger's home, , in the early summer of 1974.

In July, the lead single, "It's Only Rock 'n' Roll (But I Like It)", was released and despite the familiar sound, it surprised many by not reaching the top ten. With its sing-along chorus, it has become a staple at Rolling Stones concerts. A cover of "Ain't Too Proud to Beg", originally a 1966 hit by , was released as the second single in the US only, where it also became a top-twenty hit. Its parent album appeared in October with brisk initial sales, reaching number two in the U.K. (breaking a string of number-one albums that stretched back to 1969's "") and number one in the U.S. where it eventually went platinum.

Reviews were largely positive, with saying in "", "It's Only Rock 'n Roll" [is] one of the most intriguing and mysterious, as well as the darkest, of all Rolling Stones records." However rock critic disparaged the album in "", much like "Goats Head Soup", saying, "The Stones have become oblique in their old age, which is just another word for perverse except that perverse is the corniest concept extant as they realized at inception... "Soup" was friendly and safe. I want the edge and this album doesn't reassure me that I'll get it, what a curious situation to be stuck in, but maybe that's the beauty of the Stones, hah, hah, kid? This album is false. Numb. But it cuts like a dull blade. Are they doing the cutting, or are we?"

Instead of immediately touring to promote the album, the band decided to head back into the Munich studios to record the next album, to Mick Taylor's disappointment and subsequent resignation from the band &mdash; a tour didn't happen until the following summer in the U.S., the "Tour of the Americas '75", with future member Ronnie Wood filling in Mick Taylor's place.

In order to promote the album, music videos were filmed for several of the songs. The most commonly-seen video from the album was the video for "It's Only Rock 'n' Roll (but I Like It)", featuring the band (in sailor suits) playing in a tent, which gradually fills with soap bubbles. Videos were also filmed for "Ain't Too Proud to Beg" and "Till The Next Goodbye".

One of the Rolling Stones' largest fan clubs goes by the name "It's Only Rock'n Roll ", though its members typically refer to it as 'IORR.'

All songs by Mick Jagger and Keith Richards, except where noted.