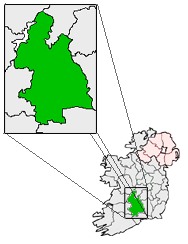 Cashel ( _ga. Caiseal Mumhan, meaning "Stone Fortress of Munster") is a in , in the southern midlands of Ireland, which is also the episcopal see of a Roman Catholic archbishopric (though the cathedral is in Thurles) and of an Anglican bishop (who is also bishop of Ossory and as such resides in ). Population 11,400.

The town is just off the M8 route from to Cork.Cashel is particularly renowned for the , a site hosting a ruined church and fortifications, formerly the seat of the Irish kings of .

The , to which the town below owes its origin, is an isolated elevation of stratified , rising abruptly from a broad and fertile plain, called the . The top of this eminence is crowned by a group of remarkable ruins. This ancient metropolis has lost its importance and of its population fell under 3,000. Originally known as Fairy Hill, or Sid-Druim, the "Rock" was, in pagan times, the "dun", or castle, of the ancient Eoghnacht Chiefs of Munster. In Gaelic Caiseal denotes a circular stone fort and is the name of other places in Ireland. The "Book of Rights" suggests that the name is derived from "Cais-il", i.e. "tribute stone", because the Munster tribes paid tribute on the Rock. Here Corc, the grandfather of Aengus Mac Natfraich, erected a fort, and Cashel subsequently became the capital of Munster. Like Tara and it was a celebrated court, and at the time of St. Patrick claimed supremacy over all the royal duns of the province, when Aengus ruled as King of Cashel.

In the 4th century, the dynasty founded their capital on and around the rock. In the times following, the kings of Munster reigned here. is believed to have baptized Cashel's third king, Aengus, though it is more likely to have been . In the usurper, , was crowned here as the first non-Eóghanacht king of Cashel and Munster in over five hundred years. In his great-grandson, King , gave the place to the , which also denied it forever to the MacCarthys, the senior branch of the Eóganachta. The bishops had a very famous school in Cashel and sent priests all over the continent, especially to in , where they had their own monastery, called Scots Monastery.

At the in 1172 the Irish bishops agreed to the lordship of over Ireland, in line with the policy of .

The Rock of Cashel is now one of Ireland's most popular tourist sites. The town has many other interesting attractions, including the GPA Bolton Library (which houses many books found nowhere else in the world).

The Heritage Centre & Tourist Office on Main Street (admission free) displays a model of Cashel in the 1640s and a multimedia presentation in several languages, and sells Tipperary crafts.

Walking is the best way to discover the Heritage Town of Cashel, the Georgian St. John's Cathedral (which replaced that on the Rock in the eighteenth century) and its adjacent Bolton Library, city walls, and the former Deanery or archbishop's palace which is now a leading hotel.Town centre car parking off Main Street.

Cashel is also famous for its , although this is are actually made in , a village some 16 km (10 mi) from Cashel.

Cashel is home to the Museum of Rural Life.

About 450, Saint Patrick preached at the royal "dun" and converted king . The "Tripartite Life" of the saint relates that while "he was baptising Aengus the spike of the went through the foot of the King" who bore with the painful wound in the belief "that it was a rite of the Faith". According to the same authority, twenty-seven kings of the race of Aengus and his brother Aillil ruled in Cashel until 897, when was slain in battle. There is no evidence that St Patrick founded a church at Cashel, or appointed a . St Ailbe, it is supposed, had already fixed his see at , not far off, and within the king's dominions. Cashel continued to be the chief residence of the Kings of Munster until 1100, hence its title, "City of the Kings". Before that date, there was no mention in the native annals of any Bishop, or Archbishop of Cashel. Cormac MacCullinan is referred to, but not correctly, as Archbishop of Cashel, by later writers. He was a bishop, but not of Cashel, where he was king. The most famous man in Ireland of his time, but more of a scholar and warrior than an ecclesiastic, Cormac has left us a glossary of Irish names, which displays his knowledge of Latin, Greek, and Hebrew, and the "Psalter of Cashel", a work treating of the history and antiquities of Ireland. He was slain in 903, in a great battle near Carlow.

Brian Boru fortified Cashel in 990. Murtagh O'Brien, King of Cashel, in presence of the chiefs and clergy, made a grant in 1101 of the "Rock" with the territory around it to O'Dunan, "noble bishop and chief senior of Munster", and dedicated it to God and St. Patrick. Then Cashel became an archiepiscopal see, and O'Dunan its first prelate as far as the primate, , could appoint him. At the , 1152, gave a to of Cashel, and since then his successors have ruled the ecclesiastical province of Munster. In 1127 , King of Desmond, erected close to his palace on the "Rock" a church, now known as Cormac's Chapel, which was consecrated in 1134, when a synod was held within its walls. During the episcopate of Donal O'Hullican (1158&ndash;1182), the , Donal O'Brien, built in 1169 a more spacious church beside Cormac's Chapel, which then became a .

In , after the invasion of , a synod at Cashel ended the Celtic Christian system in conformity with the "", and brought the Irish Church under Rome.

The "City of Kings" had a full share in the vicissitudes of the times. Maurice, a Geraldine, filled the see from 1504 to 1523, and was succeeded by a natural son of Pierce, Earl of Ormond, Edmund Butler, prior of Abbey. In addition to the wars between the Irish and the English there arose a new element of discord, the Anglican Reformation introduced by . While residing at Kilmeaden Castle Archbishop Butler levied black-mail on the traders of the , robbing their boats and holding their persons for ransom. At a session of the royal held at in 1539, he swore to uphold the spiritual supremacy of the king and denied the power in Ireland of the Bishop of Rome. He died 1550 and was buried in the cathedral. Roland, a (1553&ndash;1561), was created archbishop by the Roman Catholic English Queen Mary. After a vacancy of six years Maurice FitzGibbon (1567&ndash;1578) a abbot was promoted to the archbishopric by , but James MacCaghwell was put forward by . Thus began the Anglican religion at Cashel. FitzGibbon, who belonged to the royal Desmond family, being deprived of his see, fled to France and passed into Spain where he resided for a time at the Court. He conferred with the English ambassador at Paris in order to obtain pardon for leaving the country without the Queen's sanction, and to get permission to return. In this he failed, and going back to Ireland secretly he was arrested and imprisoned at Cork, where he died in 1578. On the death of MacCaghwell, Elizabeth advanced Miler MacGrath, a and , to the . He held at the same time four bishoprics and several s, out of which he provided for his numerous offspring. Having occupied the see for fifty-two years, he died in 1622. His monument in the ruined cathedral bears an epitaph written by himself.

Dermod O'Hurley of Limerick, a distinguished student of the university of Louvain in the and professor at in France, was appointed in 1581 by pope . Having presided over the Roman Catholic diocese secretly for two years, he was discovered and brought before the s at Dublin, was tortured upon his refusal to take the to the English crown and was subsequently hanged outside the city in 1583. Dr Butler 2nd (1774–1791), on being appointed to the Roman Catholic diocese, settled in , where the Roman Catholic archbishops since then have resided. His successor, Archbishop Bray (1792–1820), built a large church in the early part of the nineteenth century, on the site of which Archbishop Patrick Leahy (1857–1874) erected a splendid in Romanesque style. It was completed and consecrated in 1879 by Archbishop Croke (1874&ndash;1902) and dedicated to .

The Anglican archbishopric was reduced in status by legislation of 1833 and the bishopric combined initially with Waterford. St Albert (feast ), a reputed former bishop, is the of the Roman Catholic diocese. The Archbishop of Cashel is Administrator of the ancient Diocese of Emly.